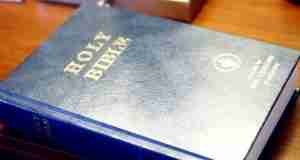 The Freedom From Religion Foundation just had a wonderful convention at the Monona Terrace in Madison Wisconsin. The beautiful lakeside facility is connected to the Hilton Hotel where many of the attendees stayed. In each of our rooms was—surprise, surprise—a “Holy Bible.” That book is preferred by an evangelical subset of just one religion. The Gideons International is a group of Protestant men. As in, no Catholics. And no women. Proselytizing Christians are viewing our hotel rooms as a mission field.

FFRF has long complained about the Gideon Bibles. In the late 1980s we launched a national “Bible Free Room” campaign, with limited success. Although this is not a state-church issue (unless the hotel is owned by the state or the military), we consider it an important consumer complaint, much like asking for smoke-free rooms. During some of our conventions, the hotel has graciously removed the offending books. This happened in Atlanta, and at the Concourse Hotel in Madison. The Millennium Biltmore in Los Angeles refused to remove the books last year.

This year, some of the convention attendees placed FFRF Gideon Bible stickers on the outside and inside of the books, asking people to actually read the bible:

The Gideon Bibles are not owned by the hotel. Many establishments are dunned into contributing to the Gideons International for the “donation,” which means that we guests are paying for them. The Gideons say that readers are welcome to take the book. I know of some guests who put it out in the hallway. Some take it home. Others throw it in the trash. Some place opposing literature in the books. August Berkshire of Minnesota Atheists crosses out “In the beginning” and replaces it with “Once upon a time.” I know of one guest who regularly “accidentally” drops it into the bathwater (or other available water). Those may (or may not) be a good way to fight back, but why do we have to do that at all? Why should we be posting complaints on their book? Can you imagine what would happen if the hospitality industry were placing The God Delusion in every room?

There should be no room at the inn for divisiveness.

The Madison Hilton bibles really bothered me because I had very recently protested to a hotel (where I was attending and officiating at the wedding of FFRF staff attorney Patrick Elliott and Sarah Pechmann). I am a loyal member of the “HHonors” program that includes the Hilton chains. That hotel appeared to take my complaint seriously. Before checking out of the Hilton Garden Inn in Shoreview, Minnesota on September 27, I emailed them this complaint:

Nice hotel, good staff, clean room, but I found a Gideon Bible in the drawer. Why are you promoting that religion? It is exclusionary and demeaning that you would place a text that directly insults your good paying customers. That book calls me a corrupt and filthy fool (Psalm 14). Do you agree with that? Your “family” hotel is endorsing hatred of family (Matthew 10:34-37) and dashing babies against rocks (Psalm 137:9). It is a violent fiction about a bloodthirsty, genocidal, filicidal pestilential, petty, vindictive, ethnic-cleanser war-god who ordered the execution of nonbelievers like me (John 15:6, 2 Chron. 15:13, Deut. 13:12-16) and whose jealous anger is only appeased by shedding blood on an altar or a cross. The book denigrates women and endorses slavery. Why carry such primitive, brutal material in your rooms? It is embarrassing. It is insulting. I didn’t ask for it. Do you think all of your guests are cowering subjects of a patriarchal monarch? I would have thought a classy and respectful hotel would rise above such ancient brutality and irrationality. People who want a bible will bring their own. Your hotel will suffer nothing by removing it from the rooms. (You could keep a couple of copies at the front desk for those who ask.) The only people who will “suffer” from their removal are the delusional sexist (men only) theocratic evangelical (Protestant only) Gideons International who view your hotel rooms as a mission field and your guests as “sinful” targets of their arrogant proselytizing. –Dan Barker, co-president of the Freedom From Religion Foundation

On October 1, I received this courteous reply:

Good Morning Mr. Barker,
I greatly appreciate you reaching out to us regarding your stay and your comments regarding the Bible.  We strive to make everyone feel like they are at home and I apologize that we messed up.
I have noted in your profile for your next stay to remove the Bible from your room.  I hope that you will give us another opportunity to provide excellent service on your next stay.
Again, my sincere apologies and thank you for letting us know how we are doing.
Best regards,
Julie Johnson
General Manager

I suppose that was all that one manager could do, without the authority to alter a universal chain-wide policy. This morning, I sent the Madison Hotel (which is part of the “HHonors” chain) this email:

I complained last month about finding a bible in my room at the Hilton Garden Inn (Shoreview MN), and you agreed to remove the offensive book when I check in to another ‘hhonors’ hotel. This weekend I found another bible in room 1038 at the Hilton Hotel in downtown Madison, Wisconsin. I checked in October 9, and out October 11, with my wife Annie Laurie Gaylor. I understand the Freedom From Religion Foundation (which was hosting a convention at your hotel with hundreds of guests) requested the bibles be removed, and you refused. [See note] But don’t you see that the bible directly offends your customers? “The fool hath said in his heart, there is no God.” (Psalm 14:1) You are endorsing a book that calls us nonbelievers “corrupt” and “filthy fools.” Like I wrote last month, there is no reason to put those books in every room. I suggested you could simply have a couple of bibles at the front desk for those who request one (and maybe a Book of Mormon, Quran, and atheist literature like The God Delusion). Instead, you select a book that relates to just one group of customers and excludes and offends all others. Why do that? Are some of your guests more important than others? Yes, we can “ignore” the bible, but why should we have to? If it said all Jews were “corrupt and filthy fools,” would you tell them to simply ignore it? It looks like the Hilton Hotel chain is preferring and promoting one particular religion and making all other believers and nonbelievers feel like second-class guests. That is not a sign of hospitality.

I’ll have to see how they respond, but I’m guessing it will be similar to the Shoreview response, pertinent to me only. One room at a time.

But what if all freethinking guests regularly complained? Paying customers have every right to ask for fair and equal treatment. Maybe it is time for us to mount another “Bible Free Room” campaign.

[Note: In the meantime, I have not found confirmation that FFRF formally requested removal of the bibles from the Madison Hilton.]

Dan Barker is co-president of the Freedom From Religion Foundation. A teenage Christian evangelist, he got ordained, pastored in three churches, and did missionary work in Mexico, had a musical ministry and graduated from Azusa Pacific College majoring in religion. Barker preached the gospel for 19 years before he “just lost faith in faith.” Now Dan is an advocate for reason and freethought. He has participated in more than 120 debates, including at Oxford University. Dan has authored seven books including: Godless: How An Evangelical Preacher Became One of America’s Leading Atheists with a foreword by Richard Dawkins; Losing Faith In Faith: From Preacher To Atheist; Life Driven Purpose: How an Atheist Finds Meaning with a foreword by Daniel C. Dennett; and God: The Most Unpleasant Character in All Fiction with a foreword by Richard Dawkins. He’s also written three freethought books for children including Just Pretend. He’s produced three albums of freethought music released by FFRF.
All Articles by this author
PrevPreviousContemptuous responses to “In God We Trust” letters show how far atheists have to go
NextArizona’s anti-abortion law leads schools astray  Next