We at the Freedom From Religion Foundation have to keep an eye on many things at once.

This week, part of our gaze was focused on our home state, since we had to warn northern Wisconsin schools about a preacher biker dude. This fella (follow the links to check out his getup) is going around schools there using bait-and-lure tactics to draw students into his sermons. 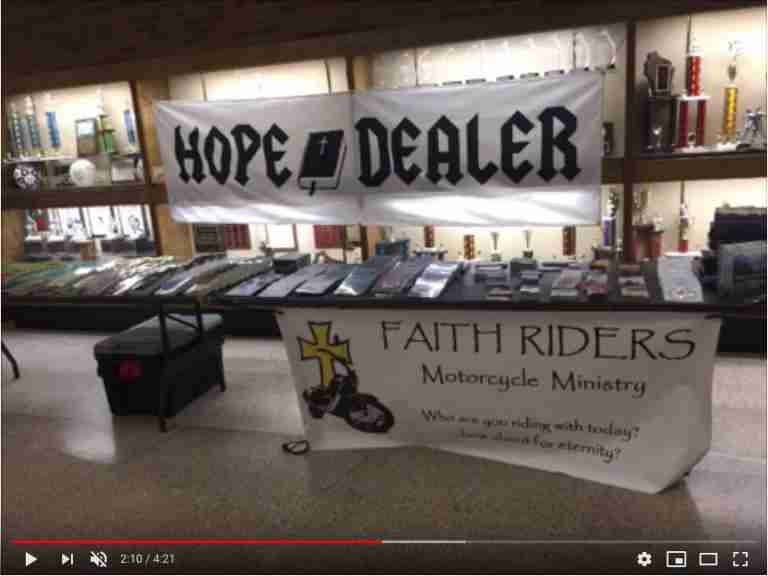 The Ohio guv puts into place his anti-women agenda
Our attention was also drawn to Ohio because of a religiously motivated egregious anti-abortion bill that theocratic Gov. Mike DeWine just signed into law there. (With all the copies of the bible at his swearing-in, we almost thought he would overdose on the book.) As more and more states pass laws essentially outlawing abortion, we noted, the traditional slogan on many a woman’s protest sign is more relevant today than ever:

“Keep your theology off my biology.” 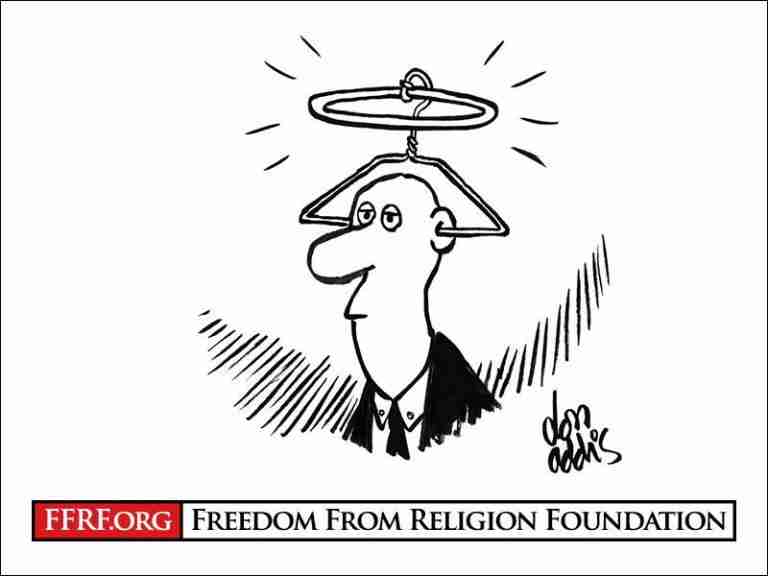 Better things to do in D.C.
We’re all for fun, educational trips to Washington, D.C., but a Kansas teacher’s unfun, noneducational outing to the nation’s capital drew our ireful notice. The vocal music director for Great Bend Senior High School arranged for students to sing at a church there and also took them to the Museum of the Bible. “Field trips, which are such important consciousness-forming experiences for students, should not be used as a pretext to foist religion on impressionable youth,” Annie Laurie remarked.

Don’t back down!
A Michigan preschool captured our attention in a positive way. We applauded school officials for their fidelity to the U.S. Constitution and urged them to ignore a theocratic group’s willful interpretation of a Christmas-time incident, after the infamous First Liberty Institute sent them a threatening letter. More power to you, Kalkaska folks!

Where in the world is Dan Barker?
FFRF Co-President Dan Barker has been constantly on the road, and those of us ensconced in Freethought Hall in Madison, Wis., have had fun keeping track. On our Facebook Live feature “Ask an Atheist” this week, Annie Laurie and I discovered that he was in Utah. The three of us also talked about Dan and Annie Laurie’s recent trip to Poland for a global atheism conference. (We saw some cool snapshots of the get-together.) And we played an excerpt from a “Freethought Matters” TV interview Annie Laurie recently conducted with the great freethinking philosopher Daniel Dennett. 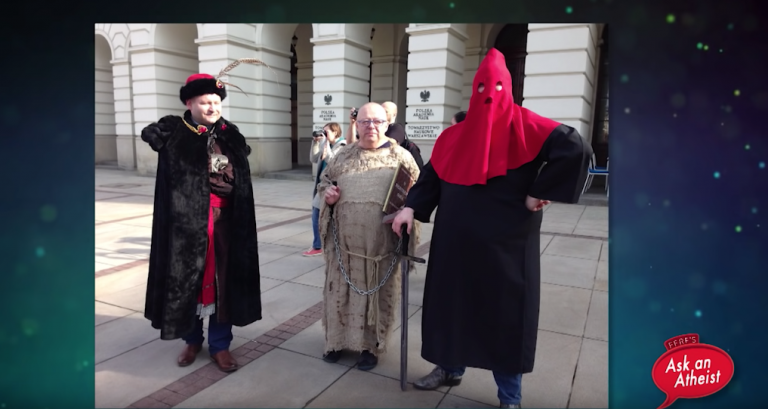 A humanist, world-famous sculptor
We’re nationally broadcasting Sunday morning (check out timings here) my interview with world-renowned sculptor Zenos Frudakis where we discuss a sculpture he created of freethinker Clarence Darrow for FFRF and talk about his other humanistic artwork. (You can catch the show on our YouTube channel here.) 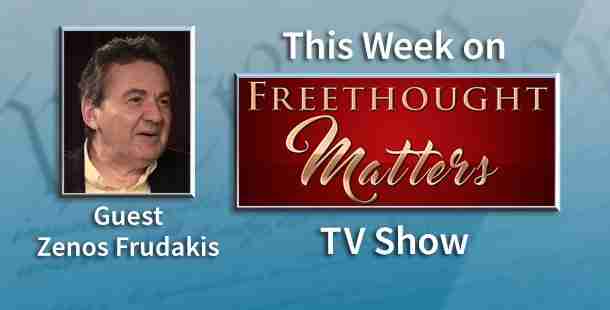 Sneak preview of upcoming TV interview
The distinguished University of Chicago law Professor Geoffrey Stone visited Freethought Hall today, where FFRF attorneys Liz Cavell and Andrew Seidel interviewed him about some of our favorite topics: the secular roots of the United States and the fate of the U.S. Supreme Court’s progressive landmarks. Pictured with him are Andrew, Annie Laurie and Liz. 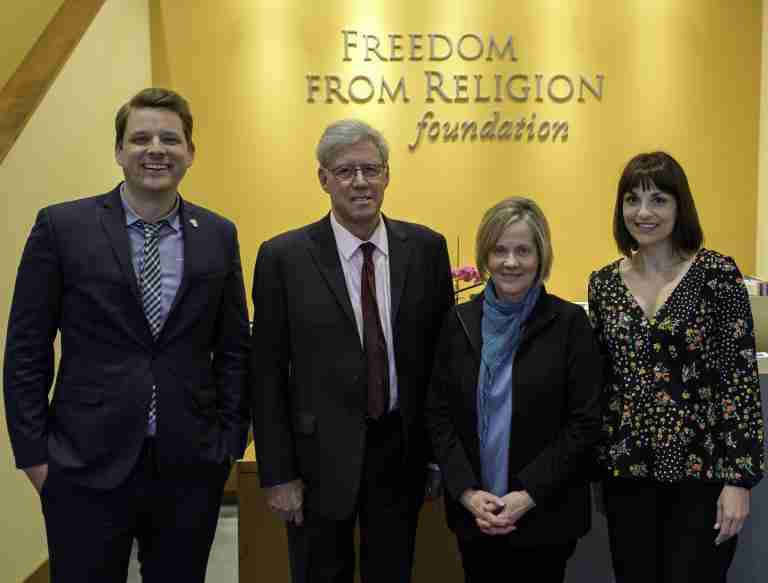 FFRF receives an award!
On our “Newsbite” this week, Annie Laurie succinctly provides highlights of the Poland trip and showcases an award FFRF received at the atheism conference. 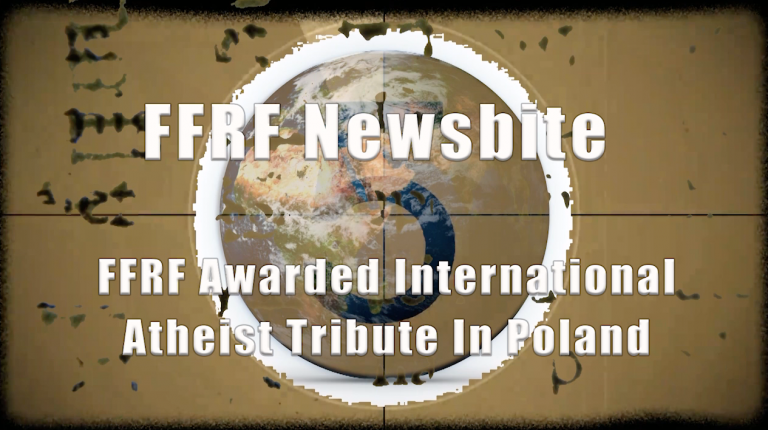 Using evolution to make sense of politics
We interviewed author, professor and clinical psychiatrist Hector A. Garcia on our radio show this week about his fascinating new book, Sex, Power, and Partisanship: How Evolutionary Science Makes Sense of Our Political Divide. And we offered a recap of the Poland conference.

Dan’s continuing adventures
Dan’s on the road in the coming week, too. Hey, all you Midwesterners, catch him in Iowa City on Tuesday, April 16, or in Minneapolis on Thursday, April 18, talking about faith, unfaith, and how to be good without God. You won’t be disappointed.

Constitutionally wayward preachers, Constitution-upholding preschools, theocratic governors, and ever-traveling Dan — we’re able to keep our eyes simultaneously on all of these only due to your backing and support.