Skip to content
PrevPreviousSo many frames of mind
NextProbing Pence: Did his Hillsdale College commencement speech get anything right?Next

The United States seems determined nowadays to show its worst face to the world.

Otherwise it is hard to explain the Trump administration’s decision not only to start and end the opening ceremony for the new U.S. Embassy in Jerusalem with Christian prayers unbecoming of a secular nation, but also to choose two pastors who represent the nastiest aspects of their faith.

One of these, Robert Jeffress, has been in the spotlight recently for being a spiritual adviser to President Trump — and for his off-the-wall outlook.

Jeffress “has maligned most world religions and condemned homosexuality, while on Fox he spouts biblical justifications for Trump’s agenda,” Mother Jones reports. “He has referred to both Islam and Mormonism as ‘a heresy from the pit of hell.’ He believes Islam, Mormonism, Hinduism, and Buddhism are all cults, and that Catholicism represents the ‘genius of Satan.’ Jews, he believes, are going to hell.”

Was it possible for the Trump administration to pick someone more prejudiced?

Mitt Romney tweeted a vehement objection to Jeffress’ selection. (You know that we’re living in bizarre times when Romney represents a voice of reason on religion.) 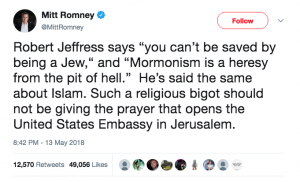 In retweeting Romney, long-time NBC reporter Andrea Mitchell added a level of outrage about Jeffress not usually found from someone working with a mainstream television network. 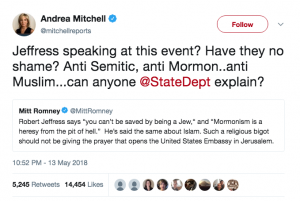 This has to be said, though: Whatever else one can accuse Jeffress of, one can’t call him a hypocrite. Jeffress responded in a tweet of his own that was an unabashed defense of his bigotry: 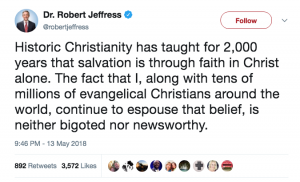 The other preacher in attendance at the embassy opening, the Rev. John Hagee (founder of Christians United for Israel), has a similarly radical perspective. Back in 2008, John McCain rejected his endorsement during his presidential bid because it emerged that Hagee believed the Holocaust was part of God’s scheme to get Jews to emigrate to Israel to hasten Jesus’ return. Actually, that’s the core of both clerics’ worldview when it comes to the Middle East: Israel is part of God’s plan to bring about the Second Coming.

“Despite their comments about Jewish people, the two pastors are among the leading pro-Israel voices in the evangelical Christian world,” the New York Times reports. “Some evangelicals believe that American foreign policy should support Israel to help fulfill biblical prophecies about the second coming of Christ.”

Times columnist Michelle Goldberg was sharper in her critique of what was going on at the Embassy ceremony.

“The event was grotesque,” she wrote. “It was a consummation of the cynical alliance between hawkish Jews and Zionist evangelicals who believe that the return of Jews to Israel will usher in the apocalypse and the return of Christ, after which Jews who don’t convert will burn forever.”

Not surprisingly, both sermons at the observance were laden with troublesome religious baggage.

“We thank you, O Lord, for President Donald Trump’s courage in acknowledging to the world a truth that was established 3,000 years ago — that Jerusalem is and always shall be the eternal capital of the Jewish people,” Hagee said.

For his part, Jeffress intoned: “We come before you, the God of Abraham, Isaac and Jacob, thanking you for bringing us to this momentous occasion in the life of your people and in the history of our world.”

But what’s even more disturbing is how closely aligned the Trump administration’s Middle East viewpoint is with the perspectives of these bible-thumpers. Look at what none other than the U.S. ambassador to Israel is saying.

“Well, first of all, I would I would take issue with beginning the history lesson in 1947,” David Friedman told NPR when asked about the history of Jerusalem. “Go back another 3,500 years, go back to the bible. I’ll tell you an interesting story. One of the great commentators on the bible, his name was Rashi, and he said the reason that the bible begins with the creation of the world is to create the chain of title from God directly to the Jewish people for the land of Israel, so that if the nations of the world say the Jewish people don’t own the land of Israel, they would point to the fact that God created the world and gave it to them.”

Or, as FFRF Co-President Dan Barker bitingly asks, “So the U.S. government is treating the bible as a historical source?”

Indeed — and sadly — it seems to be. Exhibit number two is the second in command in the current administration.

“The Jewish people’s unbreakable bond to this sacred city reaches back more than 3,000 years,” Mike Pence said in a speech to the Israeli Knesset in January, as FFRF Co-President Annie Laurie Gaylor wrote about in a blog. “It was here, in Jerusalem, on Mount Moriah, that Abraham offered his son, Isaac, and was credited with righteousness for his faith in God.”

And then he continued: “It was here, in Jerusalem, that King David consecrated the capital of the Kingdom of Israel,” adding, “By finally recognizing Jerusalem as Israel’s capital, the United States has chosen fact over fiction.”

Yes, only if you inverse fiction and fact, as this administration seems to have a singular knack for doing.

All of this is perhaps not that surprising, considering that the shift of the U.S. Embassy from Tel Aviv to Jerusalem was a major promise that Trump made to his evangelical base, 80 percent of whom decided to cast their lot with him in 2016. But the real-life consequences of the Trump administration’s implementation of the Christian fundamentalists’ desired foreign policy have been horrifying, with the massive protests and the dozens of deaths just the initial reaction to a move that will significantly tarnish this country’s image.

In the service of religious zealots, the United States is making itself a huge number of enemies all over the world.

AMITABH PAL is the Communications Director of FFRF. Prior to joining in February 2016, he was the Managing Editor of The Progressive magazine for more than a decade. He was also the editor of the Progressive Media Project, an affiliate of The Progressive that sends out op-eds through the Tribune Wire Service to hundreds of newspapers in the United States and other countries. Pal has appeared on C-SPAN and BBC and television and radio stations all over the United States and abroad. His articles have been published in school and college textbooks in the United States and Australia. Pal teaches a course at Edgewood College in Madison, Wisconsin. He has a Master's in Journalism from the University of North Carolina and a Master's in Political Science from North Carolina State University.
All Articles by this author
PrevPreviousSo many frames of mind
NextProbing Pence: Did his Hillsdale College commencement speech get anything right?Next