Skip to content
PrevPreviousGaylor to Gillibrand: Your bible is even worse than Trump!
NextHaving Solstice fun as we advocateNext

I opened my New York Times today to be greeted with the sad news that “Janet Benshoof, Women’s Champion, Dies at 70.”

I immediately thought back to my opportunity to rub shoulders with a brilliant woman. 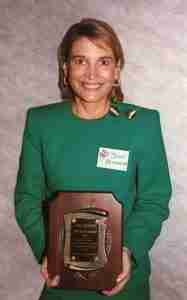 I met Janet, a brainy, Harvard-trained attorney who quickly became a star reproductive rights litigator and innovator, after inviting her to speak at a national convention of the Freedom From Religion Foundation. I and my mother, Anne Gaylor, FFRF’s principal founder and an early abortion rights activist, were especially impressed with Janet’s commitment to abortion as a right under the Establishment Clause. She “got it,” clearly understanding the religious basis of the war against reproductive rights.

We invited her to a convention in 1992, but didn’t get to meet her until the following year. To our disappointment, a sudden illness forced her to cancel at the last minute. So we joked when introducing her in Huntsville in 1993 that Janet was “a speaker worth waiting a year for.” And, indeed, she was.

In her talk, “Fundamental Rights and Fundamentalists: Is There a Middle Ground?” she told us, presciently: “When I talk about fundamentalism, I’m not just talking about the old-fashioned, conservative sects that we knew about 20 or 30 years ago. I’m talking about the growing political religious structure in this country that seeks to oppose religious freedom for everyone and impose a religious theocracy.”

We awarded Janet, as president of the Center for Reproductive Life & Policy, a “Civil Liberties Heroine” award. Among her many accomplishments up until that point was arguing a case before the Supreme Court against the Chastity Act passed by Congress. Janet argued against this based on the Establishment Clause, a strategy my mother and I felt had been sorely missing in legal arguments on the right to abortion. The Justice Department, ultimately, as a result of the court’s action in her case, was forced to adopt rigorous guidelines ensuring it didn’t promote religion.

She recounted that her first big abortion case was Harris v. McRae, lost by a 5-4 vote in the U.S. Supreme Court. That unfortunate ruling affirmed the right of Congress to pass the Hyde Amendment, cutting off federal funding for almost all abortions for women receiving Medicaid. Today, about 35 states likewise cut off state funding, leaving indigent women and the working poor out in the cold when it comes to exercising their constitutional rights under Roe v. Wade. (And that’s why I’m co-administrator of the Women’s Medical Fund volunteer abortion rights charity, which has helped almost 1,000 such Wisconsin residents pay for abortion care this year.)

As Janet explained to our sympathetic audience: “The Supreme Court in McRae struck down our claim that the Hyde Amendment violated the Establishment Clause.” But she noted her strenuous objection to such reasoning: “There was no secular justification for this discrimination when you looked at the legislative history and when you looked at what the law could do in monetary terms.”

I was pleased to sit by Janet during the banquet before her award and talk to get a little better acquainted. After the evening was over, I happened to pass by Janet speaking animatedly to her husband on a pay phone at an open booth near the hotel’s ballroom (remember, this was 1993). It’s said those who overhear talk about themselves often hear ill. But my gratitude for her outstanding legal activism and leadership turned even warmer when I heard her generally sing praises to the convention. She then pulled out a notepad and started to read notes she had taken during Dan’s concert of some of his witty lyrics. We felt we’d met a kindred “nonspirit.”

Janet’s commitment to equal rights under the law — to the forgotten women deprived of abortion rights due to religiously inspired discrimination — wins her a special place in my roster of “immortals” — whose work and legacy to contribute to humanity lives after them.

Her feisty activism included once taking out a full-page ad in the New York Times when she was with the ACLU to embarrass the state of Utah, after she discovered a provision on the books could be read to mean the death penalty for women who’ve had abortions. The provision was revoked.

But her career, as the Times’ significant obituary shows, extended far beyond the early 1990s when we’d been more closely observing it. Janet had initially directed the ACLU’s reproductive freedom project, then went on to found the separate Center for Reproductive Rights, a group that took the lead in litigating the endless attacks against Roe v. Wade. More recently, I learned, Janet established the Global Justice Center, which took such actions as training judges in Iraq on how to prosecute sexual violence against women under international law.

I was fascinated to learn that Justice Ruth Bader Ginsburg, as Janet’s longtime friend, had officiated at her wedding. And I was comforted by the Times’ report that five days before her death from a rare and aggressive cancer, Ginsburg had sent Janet a note reading, in part: “Martin Luther King said the arc of the moral universe is long, but it bends toward justice. To make that so it takes people of your commitment, will and grit.”

Janet Benshoof used her legal degree to become a freedom fighter for women and equal justice, making an enormous difference both to individual women and the law.

Annie Laurie Gaylor is co-president of the Freedom From Religion Foundation. She co-founded FFRF in 1976 as a college student with her mother Anne Nicol Gaylor. She served as the editor of FFRF’s newspaper, Freethought Today, from 1985-2009. She became FFRF co-president with Dan Barker in 2004. Annie Laurie has authored three books for FFRF: Woe to Women: The Bible Tells Me So; Woe to Women: The Bible Tells Me So; and Women Without Superstition: “No Gods – No Masters”, the first anthology of women freethinkers.
All Articles by this author
PrevPreviousGaylor to Gillibrand: Your bible is even worse than Trump!
NextHaving Solstice fun as we advocateNext