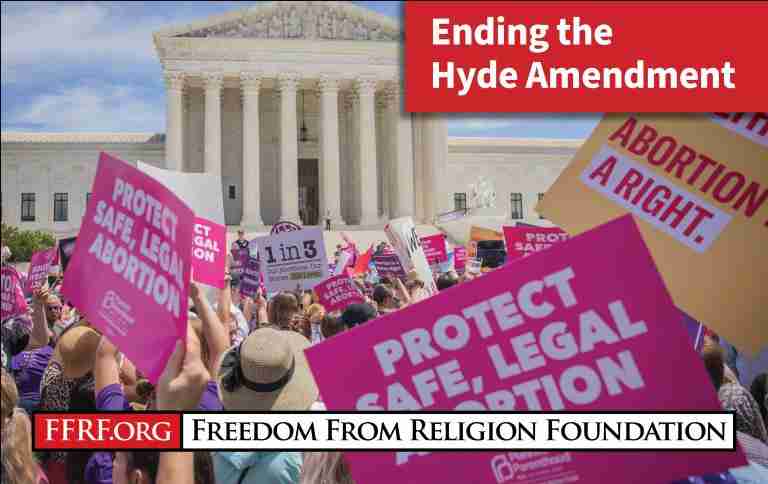 It is high time that we end the destructive Hyde Amendment, a religiously rooted piece of legislation that denies abortion coverage for otherwise eligible federal health care recipients. Simply put, the Hyde Amendment is based on religious intent — not science. And the impact is ruinous.

The Hyde Amendment was introduced by staunchly Catholic Rep. Henry J. Hyde and first enacted in Congress in 1976. Hyde’s intent with this amendment was to make abortion as inaccessible as possible. On the heels of the Supreme Court’s landmark case Roe v. Wade, which made abortion a constitutional right, Hyde sought an opportunity to restrict abortion on a broad scale. He found that by targeting low-income women and women on federal health plans, he could do just that. And since 1976, the Hyde Amendment has been included in every Congressional appropriation act.

Due to the Hyde Amendment, low-income women on Medicaid, federal employees, women in federal prisons, Peace Corps volunteers, those in the Children’s Health Insurance Program and Native American women on the Indian Health Service program are ineligible to receive subsidized abortion care. When abortion care can range anywhere from $500 to $2,000, these out-of-pocket expenses can cost families up to one-third of their monthly income.

Thankfully, the Equal Access to Abortion Coverage in Health Insurance Act of 2021, or the EACH Act, was reintroduced last week. This bill, which currently has 127 co-sponsors in the House and 22 in the Senate, would end the draconian Hyde Amendment and make abortion accessible and affordable to millions of women throughout the country. The Freedom From Religion Foundation has joined All* Above All, a women of color coalition, and 150 other groups, including Planned Parenthood Federation of America, Religious Coalition for Reproductive Choice, and SisterSong: Women of Color Reproductive Justice Collective, to champion this bill.

As a result of the Hyde Amendment, millions of women are delayed or denied abortion care. For example, in 2018, 20 percent, or roughly 13 million women of reproductive age, were on Medicaid.

While some states elect to use their own funds to subsidize this legal medical procedure, 34 states and the District of Columbia do not. As such, low-income women and racial minorities, like Black and Hispanic women (31 percent and 27 percent respectively), are disproportionately denied their constitutional right. This leads to poor maternal health outcomes, since states with more abortion restrictions have higher maternal and infant mortality rates.

Hyde explained his religious reasoning for this patronizing and damaging legislation:

“When the time comes, as it surely will, when we face that awesome moment, the final judgment, I’ve often thought, as Fulton Sheen wrote, that it is a terrible moment of loneliness. You have no advocates, you are there alone standing before God — and a terror will rip your soul like nothing you can imagine. But I really think that those in the pro-life movement will not be alone. I think there’ll be a chorus of voices that have never been heard in this world but are heard beautifully and clearly in the next world — and they will plead for everyone who has been in this movement. They will say to God, ‘Spare him, because he loved us!’”

The Catholic Church praised Hyde for his efforts to strip women of their bodily autonomy. As a nation founded on the separation of state and church, there is no room for this religious fusion in our health care legislation.

That’s why it is imperative that we pass the EACH Act. Not only would it reverse the Hyde Amendment, but it would also prohibit the federal interference related to decisions by state and private insurance companies related to abortion coverage. Additionally, the EACH Act would end unnecessary restrictions on state health plans. Furthermore, 62 percent of Americans support abortion coverage on Medicaid.

Christian nationalist efforts to restrict abortion care are not backed by science or by the majority of people. A 2020 survey of FFRF’s membership found that a whopping 98.8 percent support abortion rights. Clearly, FFRF’ers are well aware of the role religion is playing in denial of basic reproductive and human rights. Let’s make our secular voices heard and call on our legislators to support the EACH Act immediately.

BARBARA ALVAREZ is a contributing writer for the Freedom From Religion Foundation. Previously she had held the role as FFRF's inaugural Anne Nicol Gaylor Reproductive Rights Intern, a program set up to memorialize FFRF’s principal founder, who was an early abortion rights activist and author of the book Abortion is a Blessing. Barbara was a major winner in FFRF’s essay competition for graduate students, writing about the bible’s role in the abortion battle.
All Articles by this author
PrevPreviousA new phase of civilization
NextNew anti-abortion bills are anti-scienceNext