It could happen here — especially with Barrett on the Supreme Court 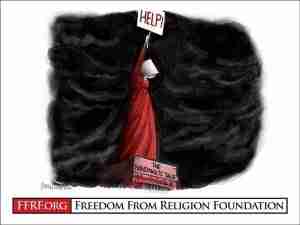 I came home from a trip to Poland last year ago on high alert over the precarious state of abortion rights, rights of conscience and other fundamental civil rights in the United States. The Polish situation is a wake-up call about how quickly rights can be lost when religion and government work hand in glove.

It could happen here. It is happening here. Poland is the cautionary tale.

The country used to be a reproductive rights beacon in Europe, with Polish women enjoying years of abortion rights dating back to the 1950s. Today, abortion is outlawed there in all but the most extreme cases. Polish women watched helplessly as abortion rights were stripped away in front of their eyes by 1993, after a union between the Solidarity government and the Catholic Church.

We mustn’t watch helplessly as abortion and other rights dependent on keeping our laws secular are stripped away. The time to speak up is now.

Amy Coney Barrett, President Trump’s nominee to replace feminist civil libertarian Justice Ruth Bader Ginsburg, is a devout, old-school Roman Catholic who has stated that abortion is “always immoral.” She tutored as a law clerk under Justice Antonin Scalia, and like him, claims to be a constitutional “originalist.” Scalia wrote: “I do not believe — and no one believed for 200 years — that the Constitution contains a right to abortion.”

Barrett would become the sixth anti-abortion extremist on the high court, with only Chief Justice John Roberts a possible moderating force among them. As court observers have pointed out, once Barrett is approved, Roberts will have little incentive to serve as the swing vote. One of the chief justice’s main perks is choosing who writes the majority opinion — but only if he sides with the majority.

With an unprecedented number of states passing draconian anti-abortion bills, it won’t take long for the “Ruthless” court, with Barrett’s addition, to overturn Roe. It is hard to see how the landmark case could survive until 2023, its 50th anniversary.

The best-case scenario is that the justices turn it back to the states. However, at least nine states, such as Wisconsin, have retained recklessly outdated statutes on the books criminalizing abortion. Wisconsin’s 1849 law would throw physicians in jail for up to six years for committing the felony of abortion care. We in Wisconsin are no closer to persuading the Wisconsin Legislature to repeal this anti-abortion law than we were in the early 1970s. Only the courts have ensured reproductive rights in many areas of the country, as they had ensured voting rights and civil rights for Blacks. “States’ rights” most often means no rights. Fundamental rights cannot be dependent on what state you happen to live in. It’s one thing for a state to pass its own speed limit, quite another to force unwilling individuals to continue unwanted pregnancies.

With nearly one in four U.S. women having an abortion by age 45 and legal abortion the law of the land since 1973, it may seem inconceivable that our nation will return to the pre-Roe days. But think about Poland.

I was a teenager and remember those pre-Roe days, when only a handful of states had passed liberalized abortion laws. When the very word abortion could only be whispered. I remember when my mother, an early abortion rights activist who later became principal founder of the Freedom From Religion Foundation, referred women to Mexico City for safe abortion care. Women suffered, risked lives, were maimed or even died attempting to end unwanted pregnancies. Tragic news stories about infanticide — usually involving a dead newborn discovered in a garbage can after a desperate teen hid a pregnancy and gave birth all alone — were not uncommon when I was growing up. Unmarried pregnant women and teens became social pariahs hustled off to invariably religious “homes for unwed mothers,” where their babies were adopted out.

I remember the overwhelming relief and joy when Roe v. Wade was handed down — because our highest court recognized the vital right “to be free from unwarranted governmental intrusion into matters so fundamentally affecting a person as the decision whether to bear or beget a child.”

I remember when President Carter commissioned a study on alternatives to abortion that had to disband in 1977, after it concluded the only real alternatives are “suicide, motherhood, and some would add, madness.”

It is madness that our nation stands at this crossroad today.

Let’s learn a lesson from Poland. . . . Demand that your senators delay the nomination vote until after the inauguration. Call, email, speak up.

Annie Laurie Gaylor is co-president of the Freedom From Religion Foundation. She co-founded FFRF in 1976 as a college student with her mother Anne Nicol Gaylor. She served as the editor of FFRF’s newspaper, Freethought Today, from 1985-2009. She became FFRF co-president with Dan Barker in 2004. Annie Laurie has authored three books for FFRF: Woe to Women: The Bible Tells Me So; Woe to Women: The Bible Tells Me So; and Women Without Superstition: “No Gods – No Masters”, the first anthology of women freethinkers.
All Articles by this author
PrevPreviousJustice Ginsburg, a court filing, a legal symposium and a multimedia cultural treat
NextDoes Amy Coney Barrett babble in tongues?Next