What are good Christian consumers supposed to do when the organizations leading the charge in the War on the War on Christmas can’t agree on which retailers are righteous enough to visit this holiday—sorry, this Christmas—season?

It’s hard to distinguish between all the Orwellian-named Christian advocacy organizations out there, so you’re forgiven if, like me, you glossed over the fact that there are multiple lists telling consumers which retailers are pro-Christmas enough to deserve patronage. The American Family Association has its “Naughty – or – Nice” list and Liberty Counsel has its list  where retailers are deemed “Naughty” or “Nice.” 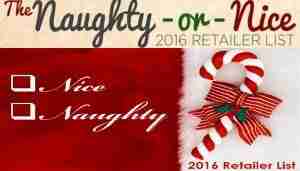 Given the identical premise and the *totally serious* issue of Christian persecution in the United States, you might assume that these pro-Christian organizations could agree on which retailers belong in which camp. But you’d be wrong. Unlike Santa, these groups made their list twice and checked it not at all.

So what is a Christian soldier to do when the generals can’t agree on which retailers are persecuting Christians? How about calling off the angry army? It may be time to acknowledge that in a country where 70% of individuals identify as Christian, Christians have it pretty good. In fact, U.S. Christians enjoy significant privilege not enjoyed by most minority religious and nonreligious citizens.

Both American Family Association and Liberty Counsel have resorted to counting how many times companies use “Merry Christmas” versus “Happy Holidays” in their advertising in order to rate them as pro- or anti-Christmas. At best, this is a pitiful public relations stunt. At worst, it perpetuates the myth that Christians are suffering real discrimination in this country.

I can’t believe that I need to write this, but apparently it needs to be stated: Having your specific religious holiday acknowledged in corporate advertising is a privilege—a frivolous, frivolous privilege.

It’s easy to laugh at this sad attempt to perpetuate the Christian persecution myth, but unfortunately this lie has deep roots and serious consequences. In 2013, the Texas Legislature took the persecution narrative so seriously that they actually passed a Merry Christmas Law, HB 308, which needlessly declares that public school teachers and students can wish each other a “Merry Christmas.” They already had that right, of course, and no one is trying to take it away from them.

The problem with the Merry Christmas Law is that it emboldens teachers to go beyond what’s legal and endorse their personal religious beliefs to students. Promotion of religion by government officials undercuts the freedom of religious choice that we all have in this country.

Another pro-Christian organization with a name straight out of 1984, Texas Values, is currently promoting their “Merry Christmas Texas” campaign to increase awareness of the bill. Texas Values includes a list of “Attacks on Christmas in Texas Public Schools,” including such horrors as “Renaming of Christmas Tree to ‘Holiday Tree’ and Christmas Party to ‘Winter Party.'” Oh, the humanity!

There is one legitimate example of censoring Christian speech on Texas Values’ list: A principal once wrongly prevented a student from distributing Christian-themed candy cane pens at a school holiday party. That’s student speech, not government speech. Texas Values puts this incident front and center on its list. The problem? That incident happened in 2003. The 8-year-old boy who was wrongly censored is now old enough to spike his own eggnog.

Texas Values needed to reach back over a decade to find the centerpiece for its persecution narrative. American Family Association and Liberty Counsel can’t even agree on which private retailers are persecuting them. And the persecution they’re complaining about is insufficiently frequent references to Christmas in advertisements. In 2016, can we please retire the tired trope of a war on Christmas?

There are real constitutional violations happening right now. Many of them are related to the holidays. But the vast majority concern members of the religious majority co-opting the government in an effort to endorse an exclusively Christian message. When this happens you can count on the Freedom From Religion Foundation to protect the interests of underrepresented minority religious and nonreligious people. Because, honestly, we all deserve a happy and coercion-free holiday season.

Sam Grover received his B.A. in philosophy and government from Wesleyan University in 2008. He first worked for FFRF in 2010 as a legal intern while attending Boston University School of Law. In 2011, his article on the religious exemptions in the Affordable Care Act’s individual health insurance mandate was published in the American Journal of Law and Medicine. After receiving his J.D. from Boston University in 2012, Sam worked as a law clerk for the Vermont Office of Legislative Council where he drafted legislation on health care, human services, and tax issues. He returned to work as a constitutional consultant for FFRF in the fall of 2013. Sam has written a paper on counterterrorism and the law that was published by the Memorial Institute for the Prevention of Terrorism in Oklahoma City and has traveled to southern Africa to work under Justice Unity Dow of Botswana’s High Court.
All Articles by this author
PrevPreviousSupport companies that seek an inclusive holiday season
NextWe were engaged in rapid responseNext