I love Paris, and detest terrorism

If he were alive today, Voltaire would translate his motto “Écrasez l’Infâme” (“Crush the Infamy” — referring to the Roman Catholic Church) into Arabic.

Many people agree with songwriter Cole Porter: “I love Paris every moment of the year.” That’s why Paris is the most popular tourist destination in the world — something I didn’t realize until Dan and I had a too-short vacation there in mid-May. A sign in front of one of the art museums informed us about 32 million people visit the “City of Light” every year. And it felt like we ran into half of them!

The city was dense with tourists like ourselves drinking in the romantic ambience and architecture, world-class museums and restaurants, history and just plain tourist attractions. That popularity, I suppose, was another reason (besides the truly obscene description of Paris as a “capital of prostitution and obscenity”) for the Islamic State to have targeted it, again.

We saw only a few reminders in May of the January massacres, some leftover placards in second-story apartment windows bearing the motto, “Nous sommes tout Charlie,” and the magazine itself being sold at news kiosks.

But how wonderfully fast, after Friday’s attack, was Charlie Hebdo artist Joann Sfar to respond via Instagram to those knee-jerk, empty offers of “prayers for Paris”: 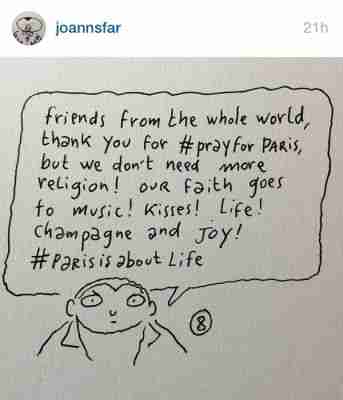 During our four days there, we wound up accidentally making a little secular pilgrimage to Voltaire sites. We happened on Quai Voltaire, by the Seine, when we were hungry and spotted the bistro, Le Voltaire, below the room where Voltaire died in 1778. There’s a historic plaque marking the building. (Voltaire’s final words, reportedly in response to a priest demanding he renounce Satan, were: “Now is not the time for making new enemies.”) At the last minute we visited the Pantheon, not realizing it contains the crypt of Voltaire. Friends had buried his body secretly in Champagne after the Church denied Voltaire the infidel a burial. In 1791, the National Assembly of France brought his remains back to Paris to enshrine in the Pantheon, with an estimated million people in attendance.

We thought it was pretty cool that the French government, after the death of Victor Hugo in 1885, officially turned what first was a Roman Catholic church, then a mausoleum, into the Pantheon — an official secular “shrine” to Voltaire, reason and other brilliant French men and women.

Also very cool was the dome of the rotunda, making it the peoples’ pantheon as it is filled with the diverse faces of everyday men and women, not Catholic imagery. Instead of rosaries and crucifixes, the Pantheon sells Voltaire’s books and cards and magnets bearing his image. I thought Voltaire would have relished knowing that his memory would become the main attraction in what was formerly a sacred Catholic place of worship. We did all the usual touristy things we had time for: going up the Tour Eiffel, where we drank some champagne at the top. We went up the 284 steps at the Arc de Triomphe in search of more views, walked down Champs-Elysées, visited the Louvre and viewed the impressionist art I love at Musée d’Orsay and l’Orangerie. We only sprang for one real dinner, at La Botanique Restaurant, an intimate little restaurant recommended by our small hotel. Since it only seemed to be catering to American tourists, I asked the waiter where all the French people were. He explained that restaurants count on tourists for weekday business and locals for weekends, when they can afford the time and a more expensive meal. That’s where many Parisians were when terrorists took aim last Friday night.

Since we stayed on the Left Bank, we didn’t get to Boulevard Voltaire, where gunmen mowed down 89 people in the Bataclan concert hall. We had stopped off in Paris en route to a conference in Cologne, Germany, sponsored by IBKA (a German freethought organization) and Atheist Alliance International. The theme of the conference, which now seems painfully timely, was: “Give Peace a Chance — Secularism and Global Conflict.”

In three days’ time, the Islamic State claimed responsibility for two suicide bombings in Beirut, killing at least 43 people Thursday and wounding more than 200. Another 26 persons died in a blast in Baghdad on Friday. At least 129 Parisians and tourists were killed in Friday’s attacks in Paris, 352 wounded — many in critical condition. The Islamic State chillingly called the attacks “the first of the storm.”

Europe is already reeling from the unending influx of displaced Syrian immigrants fleeing war and violence, many directly seeking asylum from the Islamic State. (At least one of Friday’s assailants gained EU entry passing as a Syrian refugee.) It’s a nightmare. And what a nightmare religious fanaticism creates. Yes, George W. Bush (another religious fanatic) and his misguided war after 9/11 ultimately helped unleash the Islamic State.

There are usually political resentments, vengeance and other contributing factors fueling religious wars. But religion always makes conflict worse. Only religious fanaticism brings out the suicide bombers. Suicide bombers are evidence that heaven is not some benign myth. The Islamists’ belief in how to gain entry into heaven is creating hell here on earth.

The Islamic State is drawing France, the United States and other Western nations into more warfare, more bloodshed. What would Voltaire think of Friday’s terrorism?

If he were alive today, I think Voltaire would translate his motto “Écrasez l’Infâme” (“Crush the Infamy” — referencing the Roman Catholic Church) into Arabic. I’m sure Voltaire would agree with me that the number one “sin” of religion is placing dogma above humanity. When that happens, watch out. All hell breaks loose.

Annie Laurie Gaylor is co-president of the Freedom From Religion Foundation. She co-founded FFRF in 1976 as a college student with her mother Anne Nicol Gaylor. She served as the editor of FFRF’s newspaper, Freethought Today, from 1985-2009. She became FFRF co-president with Dan Barker in 2004. Annie Laurie has authored three books for FFRF: Woe to Women: The Bible Tells Me So; Woe to Women: The Bible Tells Me So; and Women Without Superstition: “No Gods – No Masters”, the first anthology of women freethinkers.
All Articles by this author
PrevPreviousJe suis Paris, je t’aime Paris
NextBlind spots: Religion’s pervasive ‘holy terror’Next