Skip to content
PrevPreviousOur Defenses Are up
NextYes, Questions of Religion Can Be Fair Game for Senate Confirmation HearingsNext

Hurricanes Harvey and Irma Expose the Futility of Prayer

“The hands that help are better far than lips that pray.”—Robert G. Ingersoll

This year’s hurricane season proves beyond all doubt that nothing fails like prayer.

On Sunday, when the full force of Hurricane Irma was battering its way across the peninsula, Florida Governor Rick Scott desperately cried out, “Pray, pray for everybody in Florida.”

Did he forget? We’ve been there, done that.

Religious Americans have been fervently praying for protection and singing “God Bless America” for a long time. Has it made any difference? Did it stop 9/11 or other terrorist attacks? Every year since the 1950s, the President has issued a proclamation on the National Day of Prayer, formally requesting blessings from heaven. (FFRF challenged that law.) The National Day of Prayer Taskforce theme for 2017 was: “For Your Great Name’s Sake! Hear Us … Forgive Us … Heal Us!” But we didn’t get healed this year. We got thrashed. Two of the most destructive hurricanes in U.S. history have “blessed” our nation since that time, not to mention the shootings, wildfires and other disasters.

Although the natural outpouring of help for hurricane victims has been encouraging, the calamitous needs are enormous. The Freedom From Religion Foundation’s charitable arm, Nonbelief Relief, sent $10,000 to the Greater Houston Community Foundation’s “Hurricane Harvey Relief Fund.” This week we will be deciding how to help victims of Hurricane Irma. The most practical assistance is to meet real needs in the real world, and therefore is material, not spiritual.

Hurricanes are natural disasters, but many misguided government officials believe, incredibly, against all evidence, that their causes and solutions are supernatural. On August 31, after Harvey’s widespread devastation was fully revealed, Texas Governor Greg Abbott issued a Proclamation For a Day of Prayer. Although he acknowledged “the outpouring of support and resources from around the country and around the world that have been sent to Texas,” he called on citizens “to seek God’s wisdom . . . and ask for His merciful intervention and healing in this time of crisis. . . . for the rebuilding of communities and the restoration of the entire region struck by this disaster.” The Freedom From Religion Foundation protested that unconstitutional Day of Prayer Proclamation. We have repeatedly advised public officials to “get off your knees and get to work.”

Bizarrely, it was reported that Texas Secretary of State Rolando Pablos, an Abbott appointment, had declined an offer for help from Quebec for blankets, beds and hydro crews.

Quebec International Relations Minister Christine St-Pierre told media, “Maybe you find it very surprising but what he had asked is that he wants prayers from people from Quebec.” After Pablos’ incomprehensible response was publicized by media, Pablos admitted to asking for prayers, but said belatedly that his office wasn’t responsible for accepting such aid. The Texas Department of Public Safety agreed to accept 5,000 emergency hygiene kits.

Certainly, Abbott and Pablos must understand that rebuilding is accomplished by people, not gods.

Governor Abbott should know that prayers do not work, because his very own prayers have been completely ineffective. Months before hurricane season, he had issued a similar proclamation for the May 4 National Day of Prayer, asking God “for America’s protection from danger . . . recognizing the power of prayer.” Sixteen weeks later, his prayer was answered with destruction from heaven. Why does he think today’s prayers will be any different?

Florida Governor Rick Scott mirrored Abbott with his own May 4 proclamation encouraging citizens to “pray for blessings in our state and nation.” Eighteen weeks later, his supplication for “blessings” was answered with devastation. On the day hurricane Irma hit the state, Governor Scott, still believing in supernatural help, said, “Pray for us!”

What use is a day of prayer? Why should public officials be issuing any prayer proclamations at all?

Days of prayer are useless

President Trump’s congressionally mandated May 4 National Day of Prayer proclamation implored: “to ask for His continued protection . . . We pray for . . . God’s love and mercy.” I’m sure the hurricane victims are not feeling much divine protection, love, or mercy right now. Whatever help they get is coming from us down on the ground. 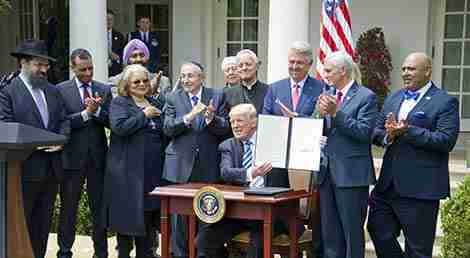 During that Day of Prayer ceremony in the Rose Garden, after a singer performed “Great Is Thy Faithfulness” and Vice President Mike Pence said “The united cry of the nation will be heard on high and answered with blessing,” Dr. Jack Graham, past president of the Southern Baptist Convention and current pastor at Prestonwood Baptist Church (Dallas, Texas), prayed: “We thank you for your amazing grace . . . for your provision and protection in our lives and upon our nation.” That protection was clearly not granted. But the rest of his prayer exposed a huge contradiction: “Now unto him who is able to do exceedingly and abundantly above all that we could ask or think or hope, to him be glory in the church for all ages . . . in the dear name of Jesus, Amen.” Apparently, such supernatural power does not encompass stopping a killer hurricane, even though millions of believers fervently asked and hoped it would.

At that same ceremony, Rabbi Marvin Hier may have been prophetic when his prayer hinted that that blessing would not actually happen: “There is much to fear because the heavens belong to God, but the earth belongs to man” (Psalm 115:16). The winds from heaven have indeed been “much to fear” this summer.

On September 3, President Trump declared yet another useless Day of Prayer, this time for the victims of Hurricane Harvey. But why are they victims? If God had answered Trump’s earlier prayers, there would be no victims. Acknowledging “friend helping friend, neighbor helping neighbor,” the president, like the governors of Texas and Florida, went on to violate his public office by mixing religion with state. “God is our refuge and strength,” he said (quoting Psalm 46:1), “a very present help in trouble.”

Citizens, not government, can pray

Citizens are free to pray, but the government must not mandate prayer. As President Thomas Jefferson noted in an 1808 letter to Rev. Samuel Miller, it is beyond the scope of the executive branch to prescribe or recommend prayer: “Civil powers alone have been given to the president of the United States and no authority to direct the religious exercises of his constituents.” When Trump proclaimed, “I urge Americans of all faiths and religious traditions and backgrounds to offer prayers today for all those harmed by Hurricane Harvey,” he did precisely what the founding father and author of the Declaration of Independence precluded.

Is God malevolent, or just deaf?

On Labor Day, less than a week before Irma slammed into Florida, a group called BridgeBuilders International (“Mobilizing tens of thousands of people in strategic prayer”) implored: “Just as Jesus spoke to the raging storm in Mark 4, we speak to Hurricane Irma and say, ‘Peace be still.’ In Jesus’ name, we speak to the storm to turn away from populated areas and go back into the sea.” Even though that same Jesus promised that “All things whatsoever you shall ask in prayer believing, you shall receive” (Matthew 21:22), the storm took its own counsel and refused to go back into the sea. Six days later, on the “Lord’s Day,” it hammered into the Sunshine State. It follows that 1) The bible is wrong, or 2) Those “tens of thousands” of strategic prayer warriors did not really believe (so why should anyone else?) or 3) There is no God. Or at least there is no god who answers prayer. There is no evidence for a god, but if such a creature does exist, it appears to be a malevolent monster who replies to desperate pleas for help with even more devastation. (See my book GOD: The Most Unpleasant Character in All Fiction for biblical documentation of that likelihood.)

On the day Irma hit Florida, The New York Times ran a story about victims turning to prayer during cleanup after Hurricane Harvey: “Hobbled and Humbled, Texans Assemble to Pray, then Rebuild.” Angie and Jeff Klimple, standing in the front yard of their devastated home in Wharton County among people who had come to help, prayed: “Father, we come to you and thank you for all these people you sent us.” Instead of blaming God “for the storm you sent us,” or admitting the futility of prayer, Angie said, “Lord, I want to thank you that we’re not in worse shape than we are, because we know that others have suffered even more.” Does she think her loving God punished others more severely than her? I think even those devout believers must be sensing that something is very wrong here: “Father, somehow, some way, you can turn it out for good,” she continued. “I don’t understand it. I can’t wrap my mind around it. I cried out for you, Lord, why did you let that happen? Why?”

The only answer to that question is to get off our knees, roll up our sleeves, and—human to human—help those who are suffering.

Dan Barker is co-president of the Freedom From Religion Foundation. A teenage Christian evangelist, he got ordained, pastored in three churches, and did missionary work in Mexico, had a musical ministry and graduated from Azusa Pacific College majoring in religion. Barker preached the gospel for 19 years before he “just lost faith in faith.” Now Dan is an advocate for reason and freethought. He has participated in more than 120 debates, including at Oxford University. Dan has authored seven books including: Godless: How An Evangelical Preacher Became One of America’s Leading Atheists with a foreword by Richard Dawkins; Losing Faith In Faith: From Preacher To Atheist; Life Driven Purpose: How an Atheist Finds Meaning with a foreword by Daniel C. Dennett; and God: The Most Unpleasant Character in All Fiction with a foreword by Richard Dawkins. He’s also written three freethought books for children including Just Pretend. He’s produced three albums of freethought music released by FFRF.
All Articles by this author
PrevPreviousOur Defenses Are up
NextYes, Questions of Religion Can Be Fair Game for Senate Confirmation HearingsNext