Skip to content
PrevPreviousVaccine disinformation, godly Little League, an intellectual treat, and a great life philosophy
NextBirth control pills should be available over the counter nationwideNext

Human progress has been due to progressives 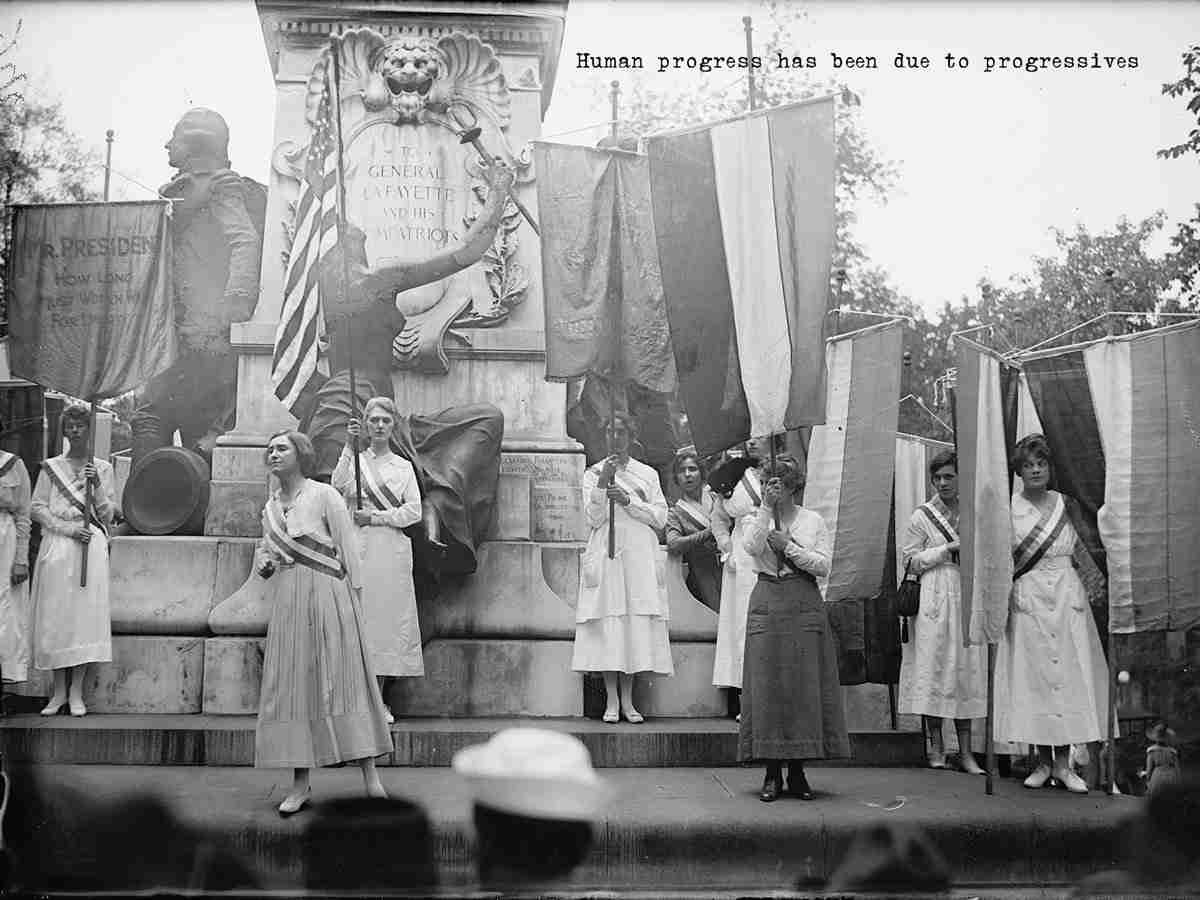 Human society has been enormously improved since The Enlightenment, chiefly because crusading liberals have overcome conservative resistance — time after time.

Modern democracy arose because America’s radical Founders renounced the divine right of kings and took up arms against England and King George III. They created a government of the people, with no aristocracy.
Slavery ended because radical abolitionists hammered the entrenched institution until the Civil War wiped it out.
Women gained the right to vote because radical suffragettes fought for decades against their inferior status. Couples gained the right to birth control because radical feminists battled against prudes and the church.
Workers gained the right to organize unions because Franklin Roosevelt’s New Deal policies defeated corporate opposition and legalized it. Retirees gained Social Security pensions because the progressive New Deal framework created the safety net program. Jobless people gained unemployment benefits and worker’s compensation because the New Deal created them, too. And it set the 40-hour work week, banned child labor and set a minimum wage.
The historic civil rights movement and the progressive Supreme Court under Chief Justice Earl Warren struck down America’s cruel Jim Crow segregation. The Warren court also ended government-led prayer in schools — and wiped out state laws against birth control. Later liberal justices gave women and girls a right to choose to end pregnancies.
Censorship of sexy books, magazines and movies was wiped out by progressive court cases. So were bluenose laws forcing stores to close on the Sabbath. Taboos against lotteries, liquor clubs and other “sins” fell away. Strides toward universal health care as a human right for everyone have included Medicare, Medicaid, Children’s Health Insurance, veteran care, government employee coverage and, finally, Obamacare.
Conservatives tried to prevent teaching of evolution in public schools, but they failed.
Conservatives tried to block sex education in public schools, but they failed.
Conservatives tried to teach “creation” in public schools, but they failed.
Right-wingers made racial intermarriage a crime, but the liberal Warren court legalized it. Puritanical right-wingers jailed gay lovers, but progressives on the high court legalized gay sex. Fundamentalists fought gay marriage, but Democratic state legislatures and the Supreme Court legalized it.
Humanism means helping people, and secularism means doing it without supernatural religion. Decade after decade, century after century, progressive reformers defeated conservatives to advance secular humanism. At the same time, churches and their magical beliefs faded enormously from Western democracies.
Pioneer Unitarian minister Theodore Parker said that the arc of history bends toward justice — and Martin Luther King Jr., who regularly attended Unitarian services as a young man, adopted the phrase masterfully.
The past shows a clear pattern of human progress — of civilization bending toward justice. Let’s hope it continues.
This column is adapted from a piece that originally appeared on July 19, 2021, at Daylight Atheism.

James A. Haught, syndicated by PeaceVoice, was the longtime editor at the Charleston Gazette and has been the editor emeritus since 2015. He has won two dozen national newswriting awards and is author of 12 books and 150 magazine essays. He also is a senior editor of Free Inquiry magazine and was writer-in-residence for the United Coalition of Reason.
All Articles by this author
PrevPreviousVaccine disinformation, godly Little League, an intellectual treat, and a great life philosophy
NextBirth control pills should be available over the counter nationwideNext