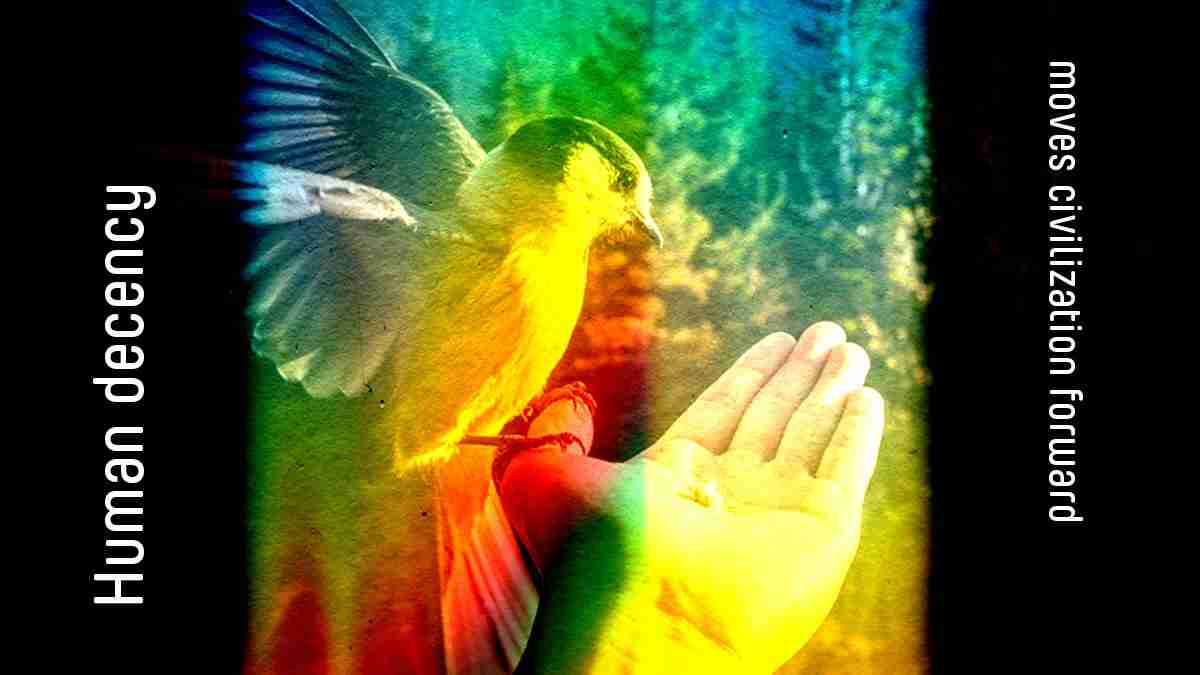 A deadly Soviet Union nuclear submarine, capable of killing millions of Americans, suffers engine trouble and is forced to surface in a little New England fishing village. After some awkward dealings, villagers with shotguns and rifles go to the waterfront. Soviet sailors line the deck with machine guns. Weapons aimed, they face each other in a tense standoff. If anyone pulls a trigger, a double massacre will occur.

Suddenly, a little boy, watching the drama from a church belfry, falls and is caught screeching tangled in a rope suspended high above the ground. Abruptly, both Russians and Americans put down their guns and rush to rescue the child. Sailors form a human pyramid and untangle him. Then both Russians and Americans join in a hugging, back-slapping celebration. Village girls kiss Russian sailors. U.S. warplanes arrived to destroy the stranded sub, but villagers shield it with their fishing boats and escort it safely back to sea.

The movie has a deep meaning: Human decency — the urge to save a child — is stronger than political conflicts and military hostilities.

A similar message occurred on Christmas Eve, 1914, when British and German soldiers paused their hideous trench warfare on the Western Front for a spontaneous truce. They sang carols to each other, shouted holiday greetings, then got out of their bunkers to meet in no man’s land, where they traded small gifts and cordialities. Afterward, commanders had difficulty forcing the men to resume shooting each other.

Actually, human decency is the lifeblood of civilization. Abraham Lincoln poetically called it “the better angels of our nature.” The desire to help each other — or at least not kill each other — keeps humanity surviving and thriving.

And decency is winning slowly. Several scholars have written books outlining this progress. For example, Harvard psychologist Steven Pinker asserts that rampant killing was 1,000 times worse in medieval times than today. In The Better Angels of Our Nature: Why Violence Has Declined, he notes that international warfare has almost vanished in the 21st century — and that murder, rape, genocide, torture, wife-beating, lynching, gay-bashing, dueling, racial attacks and even cruelty to animals are vastly less than in the past.

Today’s instant flashing of lurid news scenes makes it appear that terrible killings are everywhere — but it’s misleading. All statistics show a clear decline in savagery. Humanity is kinder and fairer than before.

The improvements arise from the best human urges. Intelligent democracy makes it possible for kindly instincts — the humane empathy locked in everyone’s inner mind — to prevail. Researchers at the University of California’s Greater Good Science Center assert that compassion evolved as humanity did, and is crucial for social progress.

As long as supposed enemies drop their guns to rescue a dangling child, there’s hope that decency can outweigh the world’s ugliness, and civilization can keep on improving.

This column is adapted from a piece originally published in Counterpunch on Sept. 21, 2016.

James A. Haught, syndicated by PeaceVoice, was the longtime editor at the Charleston Gazette and has been the editor emeritus since 2015. He has won two dozen national newswriting awards and is author of 12 books and 150 magazine essays. He also is a senior editor of Free Inquiry magazine and was writer-in-residence for the United Coalition of Reason.
All Articles by this author
PrevPreviousWinter Solstice celebrations, secular outcomes, media play and must-read columns
NextThe fraud of supernatural beliefsNext