On Fox News, Huckabee bungles the Constitution and Pensacola Cross

On Monday, June 19, FFRF won our case against a 34-foot Christian cross erected on government property in Pensacola, Fla., which we litigated with our friends at the American Humanist Association. The judge ruled that the cross has to come down. On Tuesday, Fox News, as fair and balanced as ever, interviewed us about the case. Excuse me, I meant to write that Fox News interviewed Mike Huckabee, a preacher, failed presidential candidate and former governor with no ties to the case whatsoever. 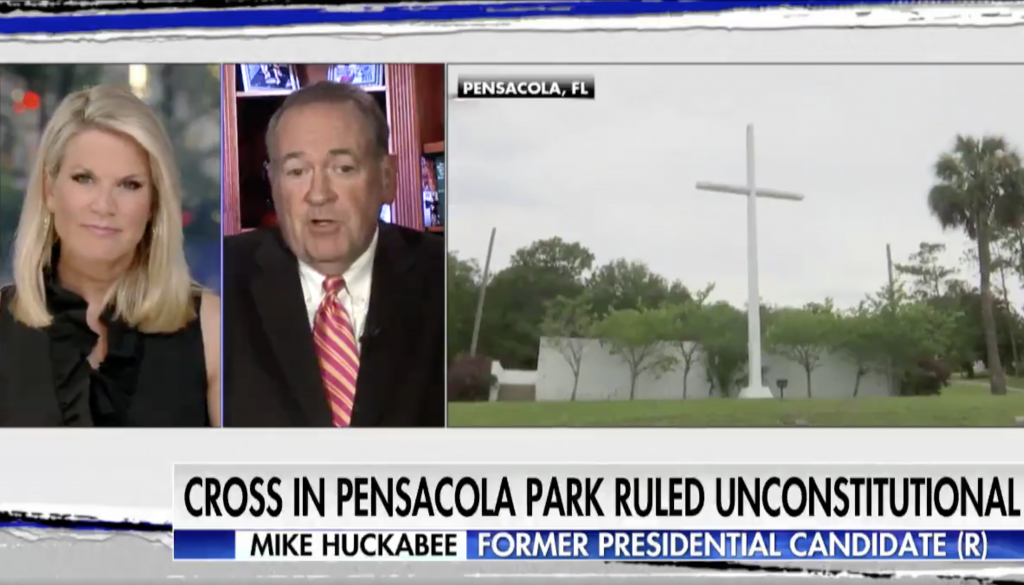 .@GovMikeHuckabee on cross critics: “They just can’t stand the fact that there are some people who believe in God.” https://t.co/H7UVFwLIXH pic.twitter.com/2x9R2jiBHq

In less than a minute, Huckabee hit six favorite talking points of those seeking to tear down the wall of separation between church and state. These fabrications are so common that this interview is worth taking point by point:

“Well, it’s absurd. Four people — FOUR PEOPLE — in Pensacola said that they had a problem with this. Tens of thousands of people have enjoyed the fact that it’s there.”

Oy vey. There are two problems here. First, it wasn’t only four people that “had a problem with” the giant Christian cross on government property, it was “We the people” — it was our Constitution. Sure, four brave local residents who were excluded by the cross were also willing to stand up for the Constitution, but that wouldn’t have been necessary if the government hadn’t breached its duty. Second, it doesn’t matter how many people approve a constitutional violation (imagine using such an argument against other constitutional violations like slavery or segregation or discrimination). As I’ve said many times, the Bill of Rights exists to protect the minority from the tyranny of the majority.

“Tens of thousands of people have enjoyed the fact that it’s there. They’ve seen it. They haven’t been offended by it.” And, “If this cross in Pensacola is somehow offensive to the point that people can’t even go by there without being overwhelmed with religion . . .”

This is probably the most common calumny hurled at the secular movement. The goal is to sketch secularism as touchy, emotional, sensitive — as fringe. This shifts the conversation from the all-important Constitution to the feelings of “perpetually offended” snowflakes. Is erecting a symbol of death and torture on public land offensive? Sure. Is that the only reason why we sued? No, we also sued because it violates the Constitution and the government wouldn’t listen to reasoned requests.

Yes, in a way, he was. Judge Roger Vinson, who actually ran the organization that erected the cross, was not able to decide this case on his personal beliefs. He wanted to keep the cross up, writing in his opinion that the Founding Fathers “would have most likely found this lawsuit absurd. And if I were deciding this case on a blank slate, I would agree and grant the plaintiffs no relief. But, alas, that is not what we have here.” The judge’s personal desires were boxed in by the Constitution, which separates state and church, and by his oath to uphold that document. So Huckabee got one right.

“. . . then tell me: When are we going to take all the crosses down at Arlington National Cemetery? . . . When will those come down? Is that not offensive?”

The frequently heard Arlington crosses claim is not a serious concern or even meant to argue the slippery slope, it’s meant to paint secularism as unpatriotic, which is odd since secularism seeks to uphold the First Amendment. The jab is an extension of the mistaken notion that to be American is to be Christian. The old canard about “no atheists in foxholes” furthers this prejudice as much as it suggests that fear pushes people into religion.

But since this comes up so often, let me answer Huckabee. Nobody has suggested that we tear down the Arlington crosses. There is a significant difference between those markers and the Pensacola cross. An individual who sacrificed his or her life for this country chose a personal memorial to be placed in a forum designed to hold individual monuments. That choice is not limited to crosses, they can choose from nearly 70 different “emblems of belief” including a sandhill crane, a pomegranate, a druid symbol, a landing eagle, infinity, a Wiccan star, the humanist symbol, and an atheist symbol.

A better analogy would ask: What would FFRF do if the government insisted that all service members get a cross on their memorial, regardless of personal belief or choice? And in fact, we see war memorials that use a Christian cross to represent every soldier all the time: Camp Pendleton (Cali.), Mt. Soledad (Cali.), Belle Plaine (Minn.), Alto (Mich.) Taos (N.M.), Longwood (Fla.), Bladensburg (Md.), Whitewater Memorial State Park (Ind.), Coos Bay (Ore.), Woonsocket (R.I.), Ogle County (Ill.), and the Mojave Desert. We’ve even seen the military mark the graves of unknown soldiers, who could’ve been atheists, Jews, nonreligious, or something else, with Christian crosses.

These are public memorials meant to honor all our heroes, but which only pay homage to Christians. They are exclusionary. This is all the more galling given that there are atheists in foxholes and nearly one-quarter of the U.S. military is nonreligious. Similarly, one-fourth of FFRF’s members are or were military. It is sacrilegious to deliberately ignore the sacrifice of atheist, agnostic, nonreligious, Buddhist, Muslim, Hindu, and Jewish service members. They bled red and died just like the Christians. How dare we honor some and not others?

In his penultimate flub, Huckabee took direct aim at FFRF and missed, “This is absurd, we are a nation that has freedom of religion, not freedom from religion.”

The Supreme Court explicitly rejected the idea that the Constitution only prohibits the government from preferring one sect over another: “This court has rejected unequivocally the contention that the Establishment Clause forbids only governmental preference of one religion over another.” The best expression of this came 30-odd years ago. In 1985, the Supreme Court wrote: “[W]hen the underlying principle has been examined in the crucible of litigation, the court has unambiguously concluded that the individual freedom of conscience protected by the First Amendment embraces the right to select any religious faith or none at all.”

“They just can’t stand the fact that there are some people who believe in God.”

This trope is meant to paint FFRF’s fight to uphold a hallowed constitutional principle — state-church separation — as the persecution of Christians. It’s hard to know whether Huckabee is deliberately misreading the lawsuit and decision, or if this is a product of a hypersensitive persecution complex. Either way, it’s wrong.

We don’t care that Huckabee believes in god. We care that he is using our government to support his belief in a personal god. It’s not about the belief — it’s about using the government to promote that belief. That’s what FFRF is fighting. No amount of Huckabee’s bloviating will stop us.

Andrew L. Seidel is a constitutional attorney and the Director of Strategic Response at the Freedom From Religion Foundation. His first book The Founding Myth: Why Christian Nationalism Is Un-American was burned by a Tennessee preacher. His second book, American Crusade: How the Supreme Court is Weaponizing Religious Freedom, is due out in 2022. He's won numerous academic awards and holds two law degrees: a J.D. magna cum laude from Tulane University Law School and an L.L.M. from Denver University’s Sturm College of Law. Andrew has a B.S. in neuroscience and environmental studies from Tulane. Before dedicating his life and law degree to keeping state and church separate, Andrew was a Grand Canyon tour guide and an accomplished nature photographer. Andrew has appeared on Fox News to debate Bill O’Reilly, MSNBC, and hundreds of other media outlets speaking on behalf of FFRF.
All Articles by this author
PrevPreviousWe oppose bad ideas
NextWe want folks to adhere to the ConstitutionNext