How the majestic mountains in my state were created 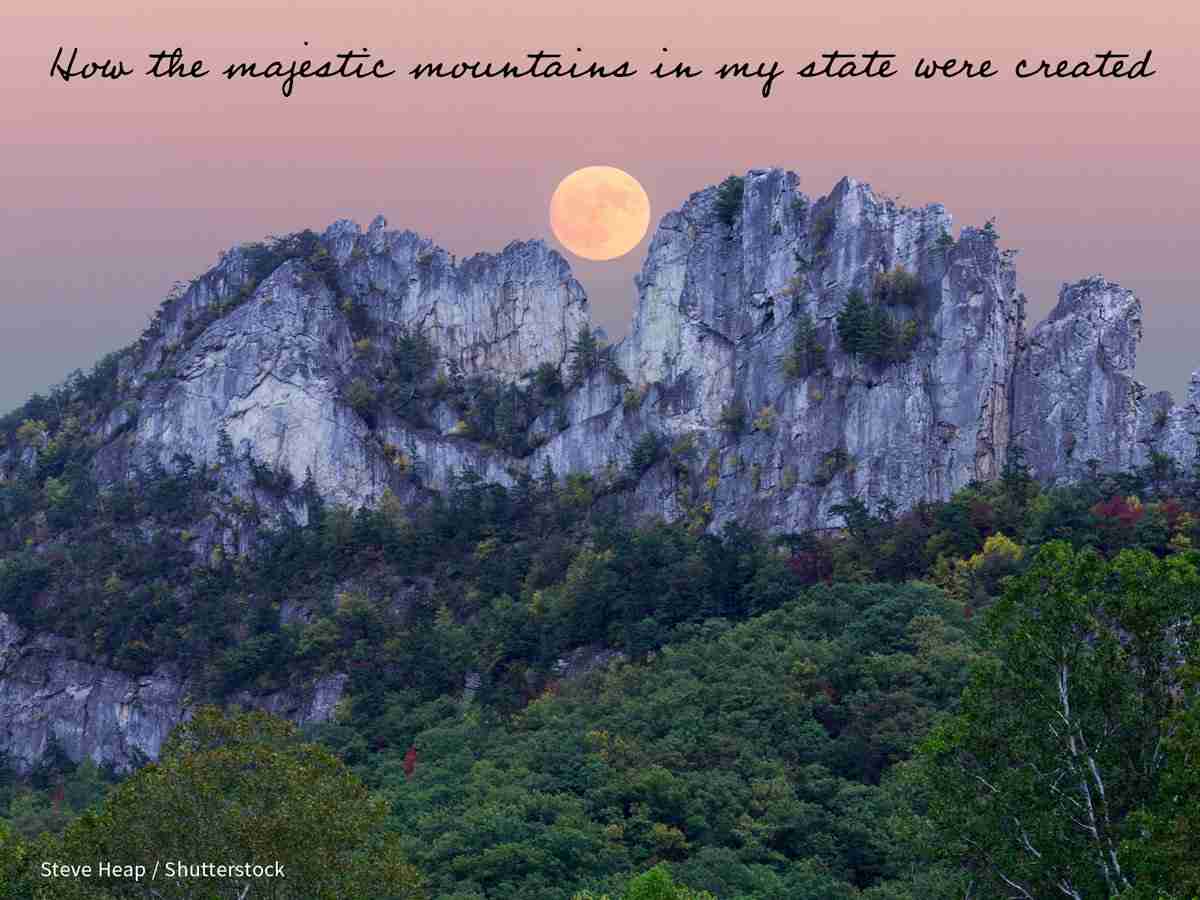 Even if you’ve lived all your life in Appalachia, the immensity of the mountains still can be awesome.

Whenever I’ve driven down the turnpike to Beckley, then east on I-64 to the Shenandoah Valley, the colossal convolutions have been as boggling as ever.

The looming peaks and slopes are especially impressive with October sunshine sparkling on the red-orange-yellow forest. But the crests are as gigantic in any season. They dwarf human activity along the roadways, making it seem trivial and transient.

By our brief standard — the outlook that considers the Roman Empire ancient — the mountains are eternal. They stood long before prehistoric men hunted mammoths by the rivers. They’ll stand long after our generation is as forgotten as the mammoth-hunters. But to geologists, mountains are just temporary changes.

Around White Sulphur Springs, the strata of roadside cliffs tilt almost on end, and some rock layers twist like pretzels. Obviously, the crust of the planet ruptured in the far past. Signs advertising limestone caverns in Greenbrier County remind us that this land once was an ocean bed. Seashell deposits filled the sedimentary rock with lime, which slowly dissolved to leave caves.

The scenic drive spurred me to find a plate tectonics book and restudy how the Appalachians were born. Here’s the explanation by Walter Sullivan, onetime science editor of The New York Times, in his Landprints:

Earth’s surface is fragmented into enormous plates that move perpetually, impelled by currents in the semi-molten interior and by lava extruding from cracks in ocean floors. The North American plate, for instance, moves westward about two inches a year. That may seem insignificant, but consider the vastness of geologic time: In a million years, the continent might travel 30 miles — and in 100 million years, 3,000 miles.

More than 1 billion years ago, Sullivan says, eastern North America crunched against an unknown land mass in what scientists call the Grenville collision. Then the masses separated, opening the prehistoric Atlantic Ocean, which existed for hundreds of millions of years before closing again.

Around 500 million years ago, North America began crushing toward the European and African plates. During the approach, great sections of ocean floor several miles thick broke upward and thrust over the Eastern Seaboard. Volcanos sprouted in the region. Then the western edge of Africa jammed into North America, buckling and crumpling the zone from Maine to Georgia.

Amazingly, the Appalachians originally rose perhaps eight miles high — compared to today’s mile-high peaks. Erosion at a rate of about one foot every 4,000 years gradually lowered the crests, and cut valleys in softer material.

While the mountain range was aging and shriveling, North America was separating from Europe and Africa. Lava rising through a long fault spread the floor of the new Atlantic Ocean, century by century, millennium by millennium.

As North America moved westward, the newer Rocky Mountains were created from Pacific island chains scooped up by the plate advancing “like a continent-sized bulldozer,” Sullivan states.

All this, according to the best scientific evidence, is how West Virginia came to be a topsy-turvy land: a place of rugged vistas and sparse population — a place too jumbled to be overrun entirely by shopping malls, subdivisions and office complexes.

The wild tumult may not be commercially advantageous, but it has a beauty and majesty affecting the soul.

This article is adapted from a piece that originally appeared on Oct. 28, 1995, in the Charleston Gazette.

James A. Haught, syndicated by PeaceVoice, was the longtime editor at the Charleston Gazette and has been the editor emeritus since 2015. He has won two dozen national newswriting awards and is author of 12 books and 150 magazine essays. He also is a senior editor of Free Inquiry magazine and was writer-in-residence for the United Coalition of Reason.
All Articles by this author
PrevPreviousSports, hospitals, movies and music
NextAnti-abortion centers should not receive public fundingNext