How freethought was born 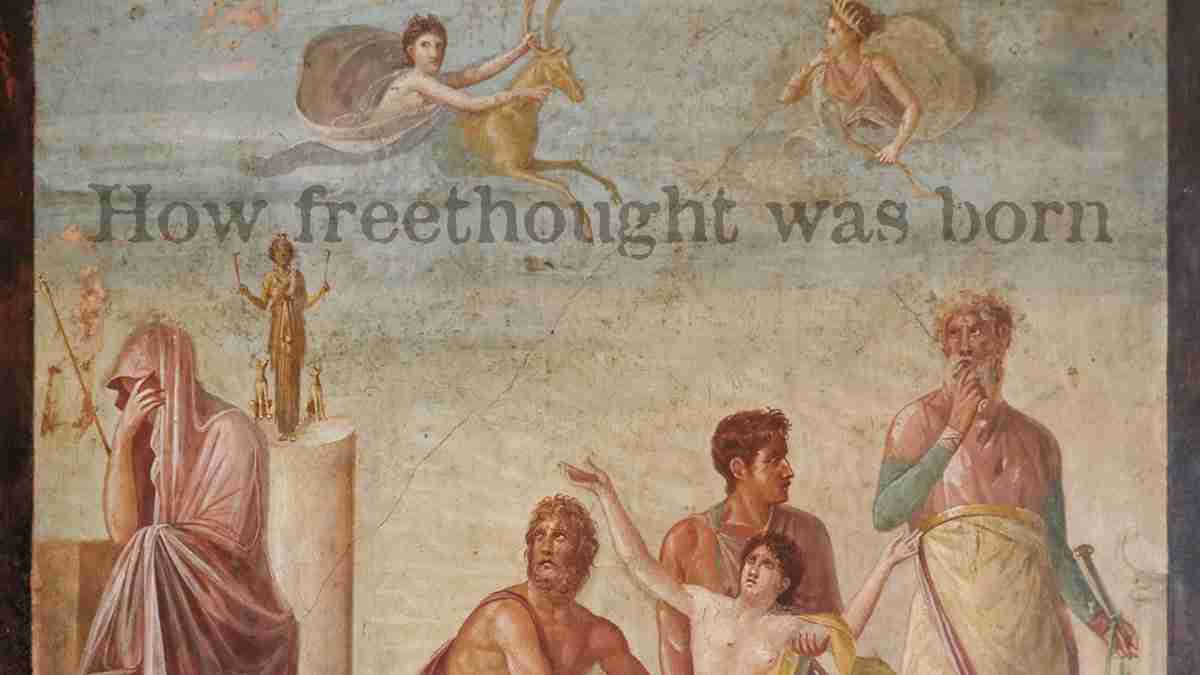 The war between science and religion began in Ancient Greece. More than two millennia ago, the Greek peninsula was the first known place where a few intelligent thinkers sought natural explanations for phenomena instead of swallowing supernatural ones.

At that time, magical faith abounded. Greeks sacrificed thousands of animals to a zoo of absurd gods who supposedly lived atop Mount Olympus. Greeks also flocked to oracles — who supposedly relayed messages from the gods.

In fact, oracle temples reaped so much wealth from gullible listeners that a series of “sacred wars” erupted over oracle riches — and the wars enabled neighboring Macedonia to seize Greece, wiping out city-states and launching the reign of Alexander the Great. Amid this supernatural chaos, pioneer thinkers took early steps toward scientific knowledge, often at the risk of death because those who disagreed with religion were prosecuted for “impiety.”

An excellent recent account of this birth of freethought is An Archaeology of Disbelief: The Origin of Secular Philosophy by retired Professor Edward “Mike” Jayne. His 200-page volume gives detailed information about a multitude of classic Greeks and their schools of thought, along with their successors, Cicero and Lucretius in Rome. The book begins: “There is no evidence of outspoken religious disbelief until the sixth century BCE, roughly twenty-five hundred years ago. This repudiation first occurred in Ancient Greece when so-called natural philosophers began to engage in speculative inquiry.”

Jayne acknowledges that some other early civilizations, in China, India and Iran, had traces of freethought — but not with the scientific spirit of Greek nonconformists. For example, in India, the now extinct Charvaka school of Hinduism had no gods or afterlife. And Jainism, founded in India in ancient times, has no creator god. (I wonder if Jayne feels kinship with the Jains.)

Regardless, those brave first Greek skeptics planted the roots of freethinking in the West.

· Epicurus (341-270 BCE) saw “the problem of evil” — that terrible diseases, natural disasters and predator cruelties prove no all-loving, all-merciful, father-creator-god can exist.
· Socrates (470-399 BCE) was sentenced to death for “refusing to recognize the gods” of Athens.
· Stilpo of Megara (360-280 BCE), charged with saying that Athena was “not a god,” joked at his trial that she was a goddess instead. He was exiled.
· Aspasia, beloved mistress of the ruler Pericles (495-429 BCE), likewise was tried for impiety, but his pleas saved her.
· Diagoras of Melos (5th century BCE) was sentenced to death as a “godless person,” but escaped into exile.
· Anaxagoras (5th century BCE) was prosecuted for saying the sun and moon are natural objects, not deities. He also fled Athens.
· Protagoras (485-415 BCE) wrote that it’s impossible to know whether gods exist. Charged with impiety, he tried to escape to Sicily, but drowned at sea.
· Xenophanes (560-478 BCE) joked that if oxen, lions and horses could envision gods, they would make them look like oxen, lions and horses.
·  Even the mighty Aristotle (384-322 BCE) was accused of doubt, and fled Athens.

In the play Bellerophon by Euripides (484-406 BCE), the main character says: “Doth someone say that there be gods above? There are not. No, there are not. Let no fool, led by the old false fable, thus deceive you.” And in the play Knights by Aristophanes (448-380 BCE), a character scoffs: “Shrines! Shrines! Surely you don’t believe in the gods. What’s your argument? Where’s your proof?”

All this skepticism arose in Ancient Greece. It was suppressed under Christianity in the Dark Ages, but sprang back in the Renaissance, the Enlightenment and the Age of Reason to finally blossom in modern scientific times.

This column is adapted from a column originally published at Daylight Atheism on Dec. 2, 2019.

James A. Haught, syndicated by PeaceVoice, was the longtime editor at the Charleston Gazette and has been the editor emeritus since 2015. He has won two dozen national newswriting awards and is author of 12 books and 150 magazine essays. He also is a senior editor of Free Inquiry magazine and was writer-in-residence for the United Coalition of Reason.
All Articles by this author
PrevPreviousAaron Rodgers tries another Hail Mary but fumbles spectacularly
NextChallenging Aaron Rodgers, Rev. Franklin Graham, the Ariz. guv & a CongressmanNext