Skip to content
PrevPreviousMike Pence, Paula White, stellar ratings, ‘60 Minutes’ — among much else
NextWe thank you for making it all possibleNext

The Freedom From Religion Foundation has been creating quite a few waves this week, and we don’t mind it at all.

Our court victory over the denial of a freethinking license plate to a Kentucky FFRF member has received national media coverage. 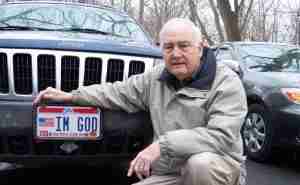 “A federal court this week ruled that the Kentucky Transportation Cabinet was wrong to rule a man could not have a personalized license plate reading ‘IM GOD,’” reports The Hill, a D.C.-based publication. “Bennie Hart, a retired postal worker, applied for the plate in 2016 but was denied, with the cabinet saying that the plate qualified as government speech and thus did not have free speech protections. Hart, who was backed in the lawsuit by the American Civil Liberties Union of Kentucky and the Freedom From Religion Foundation, said in a statement that he was ‘thankful to finally have the same opportunity to select a personal message for my license plate just as any other driver.’”

It’s a free speech victory for freethinkers that we’re thrilled to have played a part in. On our “Newsbite” segment, FFRF Litigation Attorney Patrick Elliott explains the broader implications of the case. 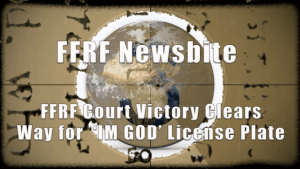 What’s up with the live Nativity scene?!
The Oklahoma media noticed our intervention that altered the holiday plans of a public school in the state.

“Edmond Public Schools officials said they have made changes to an elementary school’s annual holiday concert that depicts a live Nativity scene after the group Freedom From Religion Foundation said it was inappropriate,” reports a TV station in the state. “According to a letter the Freedom from Religion Foundation sent to Edmond Public Schools officials, a member of the Edmond community told the group that third-grade teachers at Chisholm Elementary School are having students rehearse a live Nativity scene and then having them perform it during the school’s annual holiday concert.”

Tomfoolery in our home state
The media in our home state thinks of us promptly whenever there is a state/church issue, and we were very much in demand due to religious shenanigans at the Wisconsin Statehouse.

“The Wisconsin Assembly’s ‘National Bible Week’ resolution may seem benign to many. It’s not,” wrote FFRF Director of Strategic Response Andrew Seidel in Madison’s hometown paper in decrying a ridiculous measure that the Assembly recently passed. “Resolutions like this one are often part of an explicit Christian nationalist campaign to rewrite American history and the American identity.”

And when Wisconsin’s new governor announced a sensible change, the folks in the Assembly absurdly pushed back.

“Wisconsin Gov. Tony Evers has gone back to calling the evergreen on display at the state Capitol a holiday tree, reversing his predecessor who declared it a Christmas tree,” the Associated Press reported on a commendable move that was voted down by the Legislature. “Annie Laurie Gaylor, co-president of the Freedom from Religion Foundation, applauded Evers’ decision to rename the tree. She said the move shows the governor is trying to be inclusive and noted the Christmas tree originates from pagan traditions.”

Watch TV coverage of these issues, including an interview with Annie Laurie.

Warning about imperiled abortion rights
We installed a new billboard in Madison (just blocks from the Capitol) warning about the growing dangers to abortion rights due to the influence of religion on our courts and government. And the Wisconsin State Journal published Annie Laurie’s op-ed in conjunction with that. “Abortion rights are under siege — everywhere from Poland to Wisconsin,” she warned. 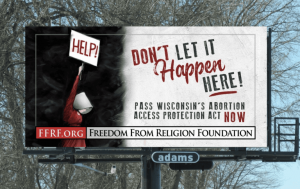 Watch a freethinking member of Congress
Our hometown member of Congress made a splash when he declared himself a freethinker at our recent annual convention, and we’re delighted to interview him on our national TV show “Freethought Matters” this Sunday. U.S. Rep. Mark Pocan defends our attempt to deliver a freethinking invocation in Congress — and gives the lowdown on other hot topics. Find out where you can catch him on television on Nov. 17. The interview is already up on our YouTube channel. 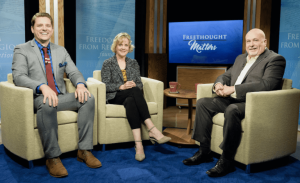 We have a scoop for you
Our radio show this week has a scoop for you. Author and researcher Frederick Clarkson tells us about his latest major exposé regarding Project Blitz, a not-so-stealthy campaign to impose Christian Nationalist legislation at the state level. The project has been trying to rebrand itself, and Fred (literally) listened in. 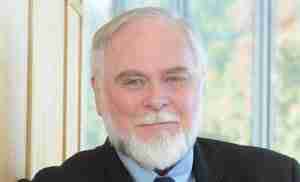 No voucher school schemes!
We engaged in some important legal work this week, weighing in on the most noteworthy state/church case — concerning governmental funding of religious education — before the U.S. Supreme Court this term. In a concise 18-page friend-of-the-court brief filed this week on the Espinoza case, we cogently argued (joined by other secular groups) that true religious liberty would be imperiled if the court strikes down a provision of Montana’s Constitution that prohibits official funding of religious education. On our Facebook Live “Ask An Atheist” feature, Andrew and Patrick, joined by FFRF Attorney Liz Cavell, offer insights into the case and its significance.

Persevering in the “small stuff”
We didn’t forget the “small stuff” in all of this. We obtained another victory in Chino Valley, Calif., (site of a huge win for us earlier this year) when we persuaded a public school to not hold an awards night event inside a local church. And we chalked up a major triumph for the Constitution when a Wisconsin county stopped its tens of thousands of dollars in annual giveaways to a Christian youth group after we objected. We urged a Virginia public school to remove a blatantly Christian large prayer sign from its lunchroom. And we mobilized you all to thwart a theocratic nominee to the federal bench. 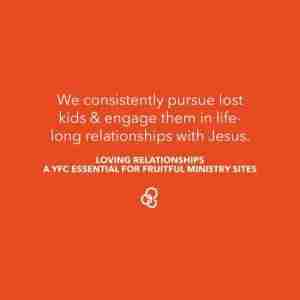 It’s not even Thanksgiving yet but the Christmas warriors are at it already, and FFRF is ready to counter them, thanks to your support.

All Articles by this author
PrevPreviousMike Pence, Paula White, stellar ratings, ‘60 Minutes’ — among much else
NextWe thank you for making it all possibleNext