Skip to content
PrevPreviousSecular activists, the time is ripe to advocate for abortion
NextOur interventions, scintillating guests, abortion rights and the absurdities of religionNext

Hate, sexism, discrimination and phony health care — all in the name of religion 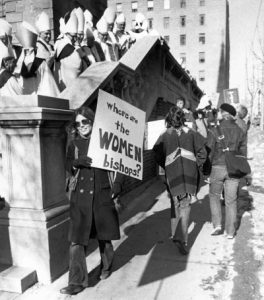 In case you missed some of these news developments over the last couple of weeks, here’s more evidence of the condition pondered centuries ago by poet Robert Burns: “Why has a religious turn of mind always a tendency to narrow and harden the heart?”

“They called for female leadership at the Vatican. They were arrested.”
This headline by Religion News Service tells the story in a nutshell. Kudos to seven brave women urging the Catholic leadership to “Ordain Women” and protesting that “It’s Reigning Men” while confronting 197 Catholic cardinals arriving at the Vatican on Aug. 29 for a papal meeting. The Catholic feminists handed out leaflets saying, “Remember your sisters who remain outside.” Some quarter of an hour later, police took them to a police station where they were detained for three hours. The event was organized by the Women’s Ordination Conference. Once again, female ordination has been pronounced “off the table” by Pope Francis.

This brought back gleeful memories of an impromptu picket my feisty mother Anne Gaylor, FFRF’s principal founder, organized when she was a speaker during an International Women’s Day event in the late 1970s. She urged many of us to go from that rally and walk a few blocks to a Catholic church in downtown Madison, Wis., to picket what is quaintly called the “installment” of a bishop and protest the church’s sexism. A good number of us showed up. We naifs were truly shocked by the look and demeanor of the motley collection of priests, monsignors and bishops who heckled us, some swearing. It was a heady and memorable picket.

But it took place more than 40 years ago! The more things stay the same. . .

The clarification followed the filing of a lawsuit by Grant Park Christian Academy in Tampa, Fla., (represented by the extremist Christian nationalist outfit, Alliance Defending Freedom) seeking an exemption from nondiscrimination provisions in Title IX, which ensures equal opportunity at educational institutions. The lawsuit alleges it should be free to discriminate because the school teaches a “biblical worldview about marriage, sexuality and the human person.” (What a self-indictment.)

The USDA granted the exemption after the July lawsuit was filed, and told Religion News Service, “USDA regulations do not require a religious educational institution to submit a written request for a Title IX exemption in order to claim that exemption. USDA’s recent guidance is meant to clarify this process.”

Even though the USDA is claiming religious schools can seek exemptions, some schools so badly want to discriminate on the basis of gender and sexual identity that they are still withdrawing from the subsidized lunch program! For instance, on Aug. 16, the Archdiocese of St. Louis withdrew from the subsidized lunch program, arguing that the clarification wasn’t good enough and “would subject archdiocesan schools to federal mandates that could impede a school’s ability to faithfully carry out the teachings of the Catholic Church.”

I have no doubt the Roman Catholic Church has ample funds to feed its own parochial school students. But it signifies how the haters keep hating — in the name of religion.

But wait, it gets worse!
This week, a federal judge in Texas appointed by George W. Bush created chaos and deprivation by ruling that religious employers can be exempt from the Affordable Care Act’s requirements for private insurance to cover preventive medicine, in this case specifically exempting an employer from covering a drug to help prevent AIDS. U.S. Judge Reed O’Connor’s action, as The New York Times puts it, “could jeopardize millions of Americans’ access to preventive services, including cancer screenings, alcohol abuse counseling and drugs that prevent HIV infection.”

Part of the ruling was technical, but it clearly stated that ACA’s requirement for private insurance to provide preventive health care “burdens the religious exercise” of Braidwood Management, a company run by a well-known Republican donor who has previously challenged the ACA. The judge recited the fact that the owner, Dr. Steven R. Hotze, believes that covering the HIV-prevention drugs “facilitates and encourages homosexual behavior, intravenous drug use and sexual activity outside of marriage between one man and one woman.”

The decision undoubtedly will be appealed — and end up before a religiously extreme Supreme Court that even before Donald Trump packed it had issued the appalling “Hobby Lobby” ruling in 2014 allowing religious employers to deny women employees coverage of any contraceptive methods the employers oppose.

Rep. Jared Huffman’s campaign for transparency from health care sharing ministries gets press.
But let’s end on a positive note. An important bill introduced this summer by Rep. Jared Huffman, co-founder and co-chair of the Congressional Freethought Caucus, got a lot of deserving press this past week.

The Freedom From Religion Foundation has written a lot about what’s wrong with health care sharing ministries. Huffman even appeared last year on “Freethought Matters” in a show devoted to publicizing concerns with the ministries, which are not health insurance. Churches have taken advantage of the loophole in the Affordable Care Act to expand health care sharing ministries, in which consumers are supposed to pool money to pay for medical emergencies. These customers are exempted from having to sign up for real health insurance. Religion News Service reports that such ministries have grown from about 100,000 members in 2010 to 1.5 million members in 2020.

Unfortunately, health care ministries don’t comply with government health benefit requirements and often exclude treatment based on moral indictment for substance abuse, illnesses that might be associated with obesity, mental health problems and drinking or smoking, to name some exceptions.

Huffman is in a good position to lead the charge against these misleading and unscrupulous “cooperatives,” since he represents many citizens in  California. Early this year, California Attorney General Rob Bonta sued a health care sharing ministry for allegedly retaining nearly 84 percent of member contributions. Religion News Service reports that more than a dozen other states have previously taken action against such entities.

Discrimination against and exclusion of women and LGBTQ, plus phony health insurance … they’re all in a day’s work for the Roman Catholic hierarchy and the fundamentalist Protestants who want to pervert religious liberty from a shield into a weapon.

Annie Laurie Gaylor is co-president of the Freedom From Religion Foundation. She co-founded FFRF in 1976 as a college student with her mother Anne Nicol Gaylor. She served as the editor of FFRF’s newspaper, Freethought Today, from 1985-2009. She became FFRF co-president with Dan Barker in 2004. Annie Laurie has authored three books for FFRF: Woe to Women: The Bible Tells Me So; Woe to Women: The Bible Tells Me So; and Women Without Superstition: “No Gods – No Masters”, the first anthology of women freethinkers.
All Articles by this author
PrevPreviousSecular activists, the time is ripe to advocate for abortion
NextOur interventions, scintillating guests, abortion rights and the absurdities of religionNext