Guide: How to Communicate about Abortion 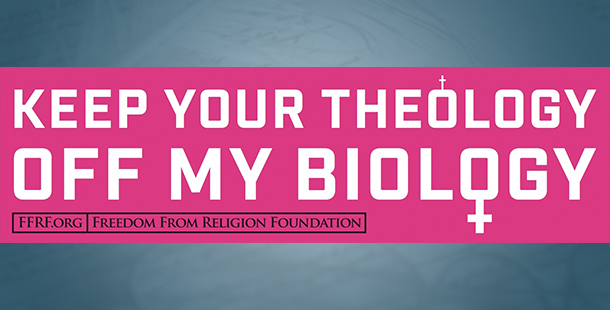 The holiday season is upon us — and brings with it potentially contentious familial discussions about current events and social issues. Abortion is bound to be one of them. You may find yourself wondering how to communicate your values as a secular voter. This guide is intended to help you do just that.

Reflection questions
I encourage you to set aside some time, grab a pen and paper, and reflect on these questions.

Step 1: Why do YOU care about abortion rights? See if you can narrow your explanation down to one or two sentences. A simple statement can help you remind yourself about why this issue is so important. My reason is: “Abortion is health care — and everybody deserves access to health care.”

Step 2: How have abortion bans/restrictions had an impact on your community? Reproductive rights have been under siege for decades. From local anti-abortion ordinances to state-mandated restrictions, abortion access has withered away over the years. Jot down a few notes about how you’ve seen this diminution of rights manifested in your own area or how you’ve personally seen abortion access decline.

In FFRF’s home state of Wisconsin, abortion is unavailable because of an 1849 anti-abortion criminalization law that is still on the books. This exacerbates existing inequalities for marginalized communities. For example, Black women in Wisconsin are five times more likely than white women to die during or within one year of pregnancy. We should be expanding comprehensive reproductive health care — not restricting it. Learn what is going on in your state at the Guttmacher Institute.

Step 3: How does being a secular voter inform your support for abortion? Abortion has overwhelming public support for people of all faiths and nonfaiths. Secular citizens pave the way, with 84 percent (and up to 98.8 percent if you’re an FFRF member) saying that abortion should be legal in all or most cases. Why are you part of that 84 percent? What about your secular identity connects with abortion rights? For me, it’s because there is no evidence or medical-based reason to restrict abortion. In fact, there is no organized opposition to abortion, except from Christian nationalists. As a result, health care legislation should reflect science — not religion.

Communicating your support
By now you should feel fairly grounded in your stance on abortion. Now let’s learn how to communicate that. Personally, I find it powerful if you can weave together facts with the personal to show the impact.

You may wish to think of it as a basic formula: Facts + Personal + Impact = Support.

Let’s break this down further.

Facts: Anti-abortion rhetoric and legislation is rooted in emotions rather than facts. When speaking with people who are focused on the emotional aspect of abortion, it is important to stick to the facts. Here are just a few derived from “Abortion Is an Atheist Issue.” You can access more at FFRF’s “Guide to the Religious War Against Abortion.”

Personal: Now that you’ve laid out the facts about abortion, you can incorporate your own personal aspects. This is where you can refer to your answers from the reflection questions. How do the facts connect with your values as a secular voter? And how do these facts connect with what you’ve seen happen to abortion in your own community? For instance, you can say “Studies have found that abortion is an extremely safe procedure. As a secular voter, I believe that health care should reflect science.”

Impact: The last part of the formula is to focus on the future —  not the past. Refrain from fear-mongering rhetoric about going back to the 1950s, coat hangers, and back-alley abortions. Instead, I recommend discussing Reproductive Justice, a framework founded by Black reproductive health activists and advocates in 1994. It is defined as “the human right to maintain personal bodily autonomy, have children, not have children, and parent the children we have in safe and sustainable communities.” This means that we can work toward a future in which nobody is denied health care and everybody can choose the option that is best for them.

Some final thoughts
When advocating for abortion as a secular voter, make sure that you don’t put down anybody’s faith or dismiss someone’s feelings or experiences. You can make space for both of those while also upholding facts and your secular values. This guide is really only helpful if the other person is willing to have a healthy dialogue. If the individual becomes antagonistic or rude,  you can simply respond with “I disagree” and end the conversation there. Lastly, you may find that someone wants to communicate with you in the future about abortion. Keep the door open —  communicating about abortion is typically not a one-and-done situation.

For more ideas, check out my posts at Freethought Now.

Lastly, Giving Tuesday is coming up! Consider supporting the Women’s Medical Fund, which was started by FFRF’s principal co-founder Anne Nicol Gaylor. The fund has helped more than 1,000 Wisconsin residents obtain affordable abortion care in 2022. You can make a tax-deductible donation here.

BARBARA ALVAREZ is a contributing writer for the Freedom From Religion Foundation. Previously she had held the role as FFRF's inaugural Anne Nicol Gaylor Reproductive Rights Intern, a program set up to memorialize FFRF’s principal founder, who was an early abortion rights activist and author of the book Abortion is a Blessing. Barbara was a major winner in FFRF’s essay competition for graduate students, writing about the bible’s role in the abortion battle.
All Articles by this author
PrevPreviousShooting shows harm of violent rhetoric against LGBTQIA+
NextYou’re one in 8 billion — and why that’s no complimentNext