Get biblical politics out of U.S. foreign policy, Pence 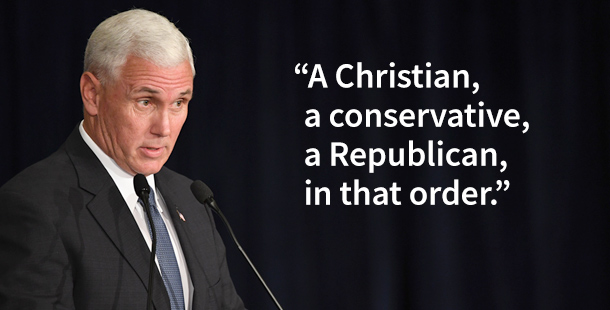 It’s shocking that America’s vice president would give an address to the Israeli Knesset riddled with such inappropriate biblical references and prophecy that Christian Palestinians are condemning it.

Mike Pence’s recent speech was excruciating in its religious pandering, such as referring to Israelis as “the People of the Book.” Not surprisingly for someone who famously describes himself as “a Christian, a conservative, a Republican, in that order,” Pence intoned:

“My country’s very first settlers also saw themselves as pilgrims, sent by Providence, to build a new Promised Land. The songs and stories of the people of Israel were their anthems, and they faithfully taught them to their children, and do to this day. And our founders, as others have said, turned to the wisdom of the Hebrew Bible for direction, guidance, and inspiration.”

Pence invoked the bible over and over in his official address to another nation’s parliament. “The Jewish people’s unbreakable bond to this sacred city reaches back more than 3,000 years. It was here, in Jerusalem, on Mount Moriah, that Abraham offered his son, Isaac, and was credited with righteousness for his faith in God,” Pence droned on, with unmitigated admiration for this morally bankrupt tale.

He continued, “It was here, in Jerusalem, that King David consecrated the capital of the Kingdom of Israel.” That led to the heart of Pence’s speech: praise for President Trump’s acknowledgment of Jerusalem as Israel’s capital. Jaw-droppingly, after his numbing recitation of biblical fiction, Pence added, “By finally recognizing Jerusalem as Israel’s capital, the United States has chosen fact over fiction.”

We can agree or disagree on our country’s policy on Israel, Jerusalem and other political matters that are beyond FFRF’s parameters. But once our nation’s leaders start claiming biblical authority for these decisions, it’s time for secular folks to draw the line.

The vice president’s address raised hackles among Christians in the area. Even with Pence pledging “more than $110 million to assist Christian and other religious minorities across the wider Middle East” (say what?), Palestinian Christians were not assuaged. “When I say Jesus is love, they want my Jesus to be a political Jesus,” demurred Munib Younan, retired bishop of the Evangelical Lutheran church in Jordan and the Holy Land.

Bethlehem’s Mayor Anton Salman, a Catholic, said Pence “would need to change his thoughts and behavior . . . and recognize the rights of Arab Palestinian Christians who are the people of this land, to support their rights to have their independence, their freedom and East Jerusalem as our capital.”

Analysts have long pointed out that there’s a very creepy reason why Christian zealots such as Pence go ga-ga over Israel. Organizations such as Christians United for Israel, directed by Texas pastor John Hagee, believe in end-time prophecies predicated on the restoration of a Jewish homeland before Armageddon can take place. (Incidentally, that means only those who “believe in Jesus,” i.e., no Jews or other non-Christians, will be “saved.”) As recently as last year, Pence addressed Christians United for Israel, saying “though Israel was built by human hands, it is impossible not to sense that just beneath its history lies the hand of heaven.”

This exercise in faithful bibliolatry by the man who’s a heartbeat away from the presidency is more than troubling.

Annie Laurie Gaylor is co-president of the Freedom From Religion Foundation. She co-founded FFRF in 1976 as a college student with her mother Anne Nicol Gaylor. She served as the editor of FFRF’s newspaper, Freethought Today, from 1985-2009. She became FFRF co-president with Dan Barker in 2004. Annie Laurie has authored three books for FFRF: Woe to Women: The Bible Tells Me So; Woe to Women: The Bible Tells Me So; and Women Without Superstition: “No Gods – No Masters”, the first anthology of women freethinkers.
All Articles by this author
PrevPreviousWe tackle the big guys
NextWhy there is a flood of bad bills and what you can do to stop itNext