Fox’s ‘fair and balanced’ means 4 against 1 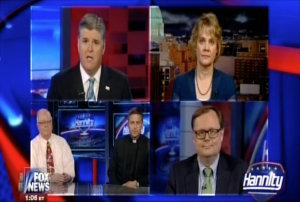 Please click on the image above or here to view a clip from The Hannity Show.

How many angry Christian men does it take to debate one atheist woman? According to Sean Hannity, at least four.

I was ganged up on Hannity’s July 1 show on the national Fox News network. I was told the show would focus on the Oklahoma Supreme Court’s 7-2 decision the day before that declared unconstitutional the Ten Commandments monument on the State Capitol grounds.

Before agreeing to appear, I asked who else would be on and was told that state Attorney General Scott Pruitt, whom FFRF has tussled with repeatedly, would be on the segment before me. Then I would join Hannity, “Father” Jonathan Morris (Fox’s favorite Catholic priest) and blowhard Bill Donohue, president of the Catholic League. I asked the producer somewhat incredulously, “Do they really need three men just to counter me?”

As I sat in the darkened studio for about half an hour awaiting my turn, a voice came through my earpiece telling me I wouldn’t be on right after the attorney general and the loquaciously disjointed sponsor of the Ten Commandments legislation. I was told that a woman whose name I didn’t recognize would be on next. Confused, I asked who that was.

The next guest was a Mississippi county clerk who had resigned rather than provide marriage licenses to gay couples. Morris, Donohue, plus (surprise!) Todd Starnes — the notorious Fox personality who makes Hannity appear liberal — would appear with me after that, I was instructed.

I assumed they were taping the show out of order, so there the camera found me, with my head down, thinking about Ten Commandments repartee, and listening to this misguidedly bigoted woman, later to be simperingly referred to as a “dear lady” and “sweet grandmother.” No one cued me that I was on. But suddenly I was, trying not to look startled, as Hannity directed a leading question to me, not about the Oklahoma case, but trying to make me say what is patently not true — that poor, “persecuted” Christian churches would be forced to host gay weddings.

If you watch the segment or read the transcript, you can tell that I was hardly allowed to complete a sentence. Hannity and his three buddies, all in the studio, interrupted me, ostensibly directing questions at me that they humorously then wouldn’t let me answer. Below is a sampling of the interruptions:

Trying to get a word in edgewise at one point, I sought to interject a comment. Donohue had the ironic temerity to reprimand me: “Hold on, ma’am. We’re having a conversation here.” They then proceeded to “talk amongst themselves” and direct jibes at me.

“I don’t believe this Annie one bit, by the way. I’ve followed her organization for years,” said Donohue. (I had been previously asked on the air if my first name is “Annie” and had already told them it’s “Annie Laurie.”)

“It seems as though the humanists have declared some sort of a secular fatwa,” opined Starnes.

“They’re lying when it comes to the separation of church and state,” Donohue added.

Morris the priest then smugly said, “The good news is that Annie doesn’t represent most atheists in our country, who are so much more rational and compassionate and tolerant.”

“Thank you!” I said (a remark stricken from the show transcript).

So much for “a conversation.”

Postscript: In a statement July 7, Gov. Mary Fallin said “the court got it wrong,” adding, “Attorney General Scott Pruitt, with my support, has filed a petition requesting a rehearing of the Ten Commandments case. Additionally, our Legislature has signaled its support for pursuing changes to our state Constitution that will make it clear the Ten Commandments monument is legally permissible. If legislative efforts are successful, the people of Oklahoma will get to vote on the issue.”

Annie Laurie Gaylor is co-president of the Freedom From Religion Foundation. She co-founded FFRF in 1976 as a college student with her mother Anne Nicol Gaylor. She served as the editor of FFRF’s newspaper, Freethought Today, from 1985-2009. She became FFRF co-president with Dan Barker in 2004. Annie Laurie has authored three books for FFRF: Woe to Women: The Bible Tells Me So; Woe to Women: The Bible Tells Me So; and Women Without Superstition: “No Gods – No Masters”, the first anthology of women freethinkers.
All Articles by this author
PrevPreviousI’m proud to be an American
NextAn open letter to attendees at the July 18 Glencoe Christian flag rallyNext