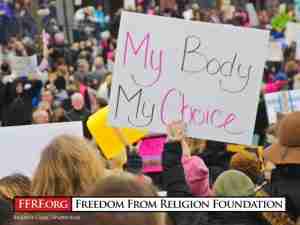 I was scrolling through Twitter when I saw this post by Qasim Rashid, a congressional candidate from Virginia. 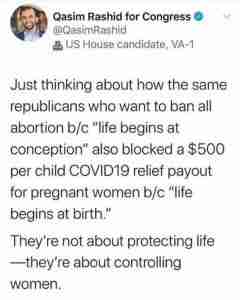 In the comments of the tweet, Rashid responded with a link to an article that outlined how much of a stimulus check someone is eligible to receive. Based on the FAQs, a pregnant woman would not be able to claim a fetus as a child until childbirth. It’s the same thing on tax returns: You can’t claim an unborn child. This is the standard, so why should we care?

Well, as I thought more about Rashid’s tweet, I realized that something disingenuous is lurking amid the heated discussions about masks and school reopenings. No, I’m not talking about the tax dollars that have been given to religious schools and religious medical facilities (including crisis pregnancy centers that aren’t even licensed health clinics). And I’m not referring to the fact that Republicans temporarily blocked women from getting abortion care because they deemed abortion nonessential.

While all of these are abhorrent displays of religious exceptionalism in a secular country, they don’t explain the underlying concept that allows them to exist. I am referring instead to the hypocrisy of the Religious Right’s standard bearer: “Life begins at conception.” Conservatives have used their religious conviction that “life begins at conception” to make these and other sweeping abortion restrictions for decades.

Let me count the ways:

• They’ve enacted the Hyde Amendment, which prevents federal dollars going toward abortion health care for citizens otherwise eligible for Medicaid or Medicare help, leaving the most marginalized of women without funding or abortion access.
• They’ve supported the Global Gag rule, which restricts foreign dollars to any organization that so much as mentions the word “abortion.” This is a factor contributing to the appalling fact that there are 25 million unsafe abortions each year around the world.
• They’ve effectively taken away Title X funding from abortion-care providers such as Planned Parenthood.
• They’ve imposed countless TRAP (Targeted Regulation of Abortion Providers) laws that make abortion care highly restricted. In fact, 23 states have medically unnecessary abortion restrictions.
• They’ve denied contraceptive care based on “moral” grounds and prevented children from accessing comprehensive sex education programs.

All of this is in the name of life supposedly beginning at conception. If they believe that life begins at conception, why don’t they allow fetuses to be counted for stimulus checks (and taxes for that matter)? In fact, why don’t religious conservatives support subsidized neonatal care? Why don’t they legislate about in vitro fertilization?

The answer is simple: To them, fetal life counts — except when it doesn’t fit their agenda. All of their conception rhetoric is more marketable than simply admitting that they don’t want women to control their own bodies.

To be clear, the bible doesn’t even say that life begins at conception. Instead the bible refers to life as “breath” in many significant passages, including the creation story in Genesis 2:7. Additionally, the bible doesn’t say anything against abortion. If it’s so important, why is it completely absent?

But even if there was consistency between the bible, the Religious Right and the notion of when life begins, it still shouldn’t matter to women’s health care. We are not a theocracy. We are a secular nation founded on the separation of state and church. And we must fight against all attempts to control women’s bodies and reproductive choices, especially through religious rhetoric.

Until then, the Religious Right will continue to impose their inconsistent religious rhetoric in health and tax laws. Because to them, life begins at convenience.

BARBARA ALVAREZ is a contributing writer for the Freedom From Religion Foundation. Previously she had held the role as FFRF's inaugural Anne Nicol Gaylor Reproductive Rights Intern, a program set up to memorialize FFRF’s principal founder, who was an early abortion rights activist and author of the book Abortion is a Blessing. Barbara was a major winner in FFRF’s essay competition for graduate students, writing about the bible’s role in the abortion battle.
All Articles by this author
PrevPreviousVouchers, travel bans — and lots of blogs & public appearances
NextRacial bigotry is rampant among White ChristiansNext