Do you remember the Supreme Court’s Hobby Lobby decision that allowed for-profit corporations to exercise their so-called “religious conscience” in order to restrict employees’ access to contraceptives? Have you been watching the legal battles over cake decorators and municipal clerks like Kim Davis who want to be able to discriminate against gay couples in the name of “religious freedom?” Now a bill has been pre-filed in Florida for the 2016 legislative session that would allow any person (or corporation) to legally discriminate in the name of their personal religion.

To put it plainly, this bill would (1) allow adoption agencies to refuse services to gay couples; (2) allow doctors/pharmacists to refuse to provide contraceptives to patients/customers; and (3) allow Christian bakers, florists, and other business owners to refuse services to gay customers or anyone else they don’t like based on their religious beliefs (atheists, Muslims, people wearing mixed fabrics, etc.). Apparently Rep. Gonzalez thinks he has solved all of Florida’s other problems and can now use his public office to impose his Catholic values on every citizen, Catholic or not.

Sadly, even though this bill would turn gay people, women, and religious minorities into second-class citizens, it actually has a chance of passing. Michigan passed a similar, but far more detailed bill to obstruct adoptions by gay couples earlier this year. And Florida’s House of Representatives approved an anti-gay adoption bill this legislative session, though fortunately the bill died in the Senate Rules Committee.

There is simply no justification for this kind of legislation beyond religiously-motivated animus and bigotry. The Constitution already protects the free exercise of religion. And Florida already has a RFRA law that allows the religious to use their beliefs as a sword to strike down generally applicable laws. Rep. Gonzalez isn’t seeking religious freedom; he’s trying to legalize religiously-motivated oppression. 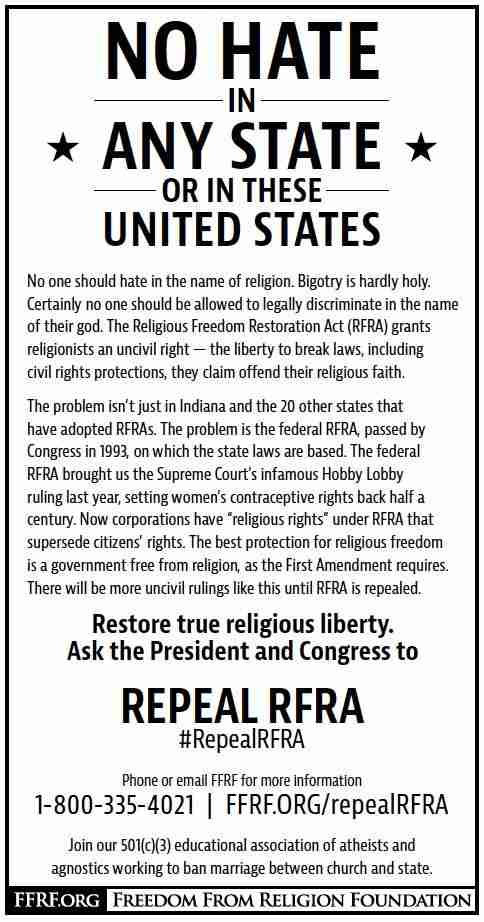 This second wave of so called “religious freedom” bills is a natural next step for legislators interested in imposing their personal religion on their diverse constituents. The federal and state RFRA bills were the first wave and FFRF has been a vocal opponent of them: we filed a brief in the Hobby Lobby case arguing that the federal RFRA is unconstitutional and have called for the repeal of state RFRAs. You can learn more about why these bills are bad policy on our website. But while the ACLU and other civil rights organizations have finally joined our cause, religious politicians continue to promote their conservative Christian agenda.

The United States is not a theocracy, as much as Rep. Gonzalez may want it to be. HB 401 cannot legalize discrimination outlawed by the Constitution. But it can embolden those in the religious majority to find new, aggressive ways to impose their beliefs on others. That may sound like a good idea to Rep. Gonzalez, but it’s a terrible idea for the country and would spell disaster for Florida.

Sam Grover received his B.A. in philosophy and government from Wesleyan University in 2008. He first worked for FFRF in 2010 as a legal intern while attending Boston University School of Law. In 2011, his article on the religious exemptions in the Affordable Care Act’s individual health insurance mandate was published in the American Journal of Law and Medicine. After receiving his J.D. from Boston University in 2012, Sam worked as a law clerk for the Vermont Office of Legislative Council where he drafted legislation on health care, human services, and tax issues. He returned to work as a constitutional consultant for FFRF in the fall of 2013. Sam has written a paper on counterterrorism and the law that was published by the Memorial Institute for the Prevention of Terrorism in Oklahoma City and has traveled to southern Africa to work under Justice Unity Dow of Botswana’s High Court.
All Articles by this author
PrevPreviousUpholding the First Amendment? You’re the Atheist Taliban
NextHobby Lobby, owners under federal investigation for “looting artifacts”Next