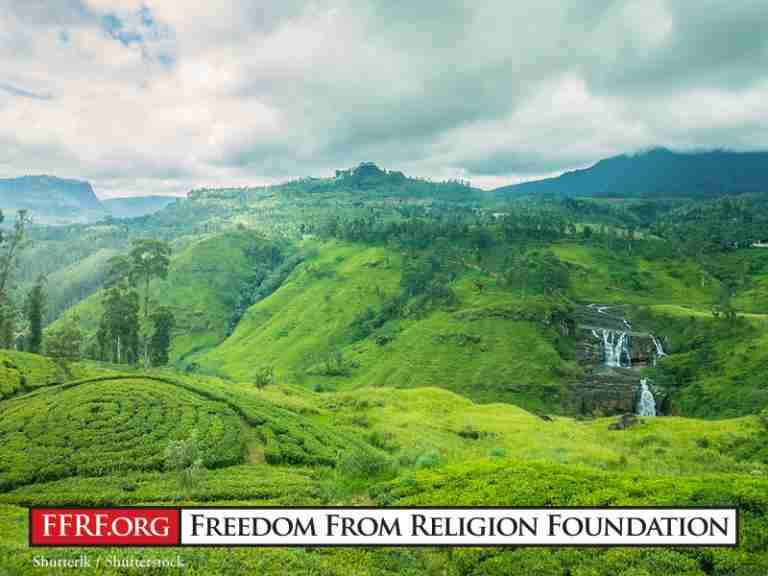 Below is a first-person account about the ongoing religious divisiveness in Sri Lanka. The writer is a refugee from Pakistan now living in Sri Lanka and a recipient of an emergency stipend from Nonbelief Relief as part of FFRF’s campaign to aid endangered nonbelievers. Now he is endangered once again:

I have been living as an asylum seeker in Sri Lanka for the last two years with my wife. We had been peacefully residing in the town of Negombo, but on Easter Sunday this town was hit by one of the worst terrorist attacks in Sri Lankan history.

After multiple suicide blasts around the country, the small island nation has been in a state of utter shock. Never in my wildest dreams had I ever thought that such a horrific incident could happen in Sri Lanka today. Pakistan, where I come from, is the country where suicide bombings happen on a regular basis; mobs gather and kill minorities and people who think differently; and houses and settlements are attacked, with people forcibly evicted.

I had already fled my home in Pakistan in a state of fear that I would be imprisoned or killed because of allegations of blasphemy or apostasy. Pakistan was no longer safe for me. In fear and extreme shock, my wife and I departed from Pakistan and came to Sri Lanka. We left everything behind: friends, family and relatives, and our house and jobs.

Now, Sri Lanka has become the same. We have been forced out of the house that we lived in. A mob gathered outside our house and people started kicking at the entrance. I opened the door because I knew resisting would only aggravate the situation. A person who was more than 6 feet feet tall pushed me, slapped me and grabbed me by the collar. I barely managed to stay on my feet. Two policemen behind him said, “You have to go to the police station.” Their eyes were red and full of rage. Then another person started to curse me in the Sinhalese language. He moved toward me, but our landlord’s wife stepped in between. She argued in Sinhalese, and also said something to the police officers.

Another man entered the house, asking: “Who did these attacks?” I said that I wasn’t a Muslim. He replied, “But you are Pakistani. Who did this attack?” At this point, I realized that there was no point in arguing. Some people were roaming in the house like raging bulls, with one of them shouting at my wife, who was crying. I told them, “We will go from here. Don’t worry.”

Then one of the police officer told us to gather our things and get to the police station. We took our passports and other important documents, and put the small amount of money that we had in my wallet, as a guy followed me through the house like a shadow.

The saddest thing for us was that our two cats, which we had adopted when we came to Sri Lanka, had gotten scared and had fled. These cats were like our kids, but there was nothing that we could do. My wife put some food and water for the poor animals. I called our landlord in the evening, but one of the cats was still nowhere to be found. They are trained to live inside the house, and we are really worried what will happen to them on the street.

But who will care for a few insignificant animals when humans are suffering on such a scale? When we came to the police station, it was like a fish market, with all the people crammed in a small parking area. People had chosen different spots for themselves and were afraid that someone else would take their spot to sleep. More people were pouring in every hour: Children were here and there without shoes, pregnant women, the sick and old — all were sitting in a hopeless condition. No one knew what would happen, and how long we would be in this situation. It was an impossible situation, even for one night.

Everybody had a story to tell — from being beaten to being dragged by the hair, robbed by the mob, and even robbed by their own landlords and neighbors. Pakistanis who had arrived empty-handed fearing for their lives because extremists wanted to kill them back home were now victims of violence here. These included Christian women who were raped in Pakistan and fled to Sri Lanka to save themselves and their families. There were Ahmadis, a heterodox Muslim sect who are non-Muslims according to Pakistan’s Constitution. They cannot identify themselves as Muslims in Pakistan, and ironically here they are being persecuted and thrown out of their houses for being Muslims. Catholic Christians who are persecuted in Pakistan for being Christians are being kicked out for being Pakistanis. Even the Catholic Church cannot convince Catholics to protect these Pakistani Catholics. It’s chaos.

Terrorism has succeeded in creating anarchy in Sri Lanka. People don’t know how to take their anger out and on whom. So the most fragile and weak people, who are Pakistani refugees, are the target. In Pakistan, minorities are easy targets, and likewise now in Sri Lanka.

So many human lives have been lost in these attacks. Negombo has been hit really badly, with scores dead, but are the refugees who have been victims of extremist violence in Pakistan the ones to blame? We would never choose to come to Sri Lanka if it was safe for us in Pakistan. And now Sri Lanka has become Pakistan. But will mob justice and mob mentality stop terrorism? I think not.

The life of a refugee is very difficult. It is not possible for an ordinary person living a peaceful life to understand the horrors refugees face. One day we are worried about financial difficulties, the next day sickness. Then there is the anxiety. Our children are sick and not getting an education, old people are in pain, and there’s no work.

UNHCR’s refugee and resettlement process is a tiring and difficult wait. People become psychologically scarred. Most of the refugees have traumatic experiences from Pakistan. Now, all the horrors are coming back. I haven’t been able to sleep well since I arrived in Sri Lanka. My wife suffered from depression. There is a similar story in every family; we’ve known of people dying in Sri Lanka waiting to be rehabilitated. It takes at least three years for a refugee to be relocated to a safe country.

I urge the United Nations, other countries and humanitarian organizations to take steps for the safety of refugees in Sri Lanka. Rapid relocation to a safe country is the long-term solution. In the short term, the Sri Lankan government should at least run an awareness campaign for the safety of refugees, and make it known to the Sri Lankan masses these these refugees are already victims of extremism.