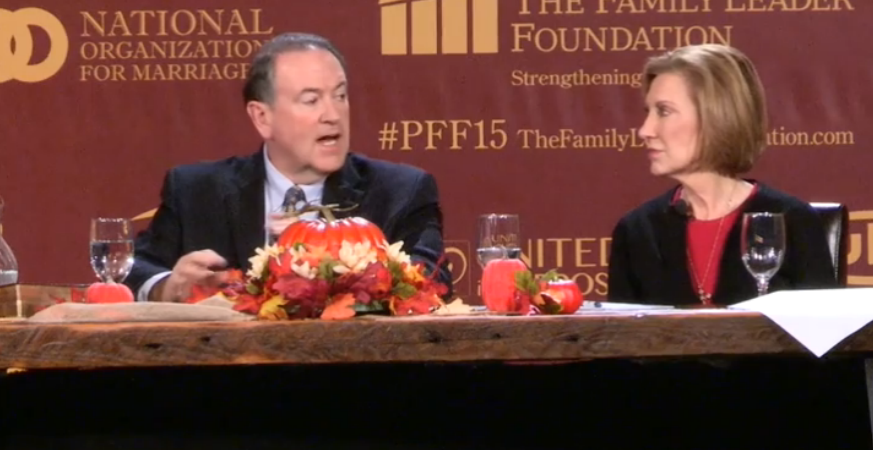 Fiorina concluded her intolerant remarks, “It’s important to elect a leader of faith who knows more — not less — prayer is necessary in public life.”

Isn’t the Islamic State led by “people of faith” who want more — not less — prayer in public life? Weren’t the terrorists who attacked Paris last week and last February “people of faith”? Was not Osama bin Laden a leader with faith? “People of faith” have, needless to say, launched many a war or violent assault in the name of faith. Far from instilling humility, such confidence that they know what God wants them to do has scorched our Earth.

This isn’t the first time Fiorina has made this offensive and ignorant assertion. Back in June, at the Faith and Freedom Coalition’s Road to Majority conference, she first asserted that “people of sincere faith make better leaders,” because “faith gives us humility,” “empathy” and “optimism.”

Recycling her statement in Iowa, Fiorina said people of faith “know there is something better than this, there is someone bigger than us.” (Will she next say, “My god is bigger than yours”?)

Previous to endorsing her virtual religious test for public office, Fiorina made a long-winded defamation of Planned Parenthood for “harvesting body parts,” an attack on the Supreme Court for “redefining” marriage and unilateral endorsement of the deplorable Religious Freedom Restoration Act.

The Iowa forum was an embarrassment to reason and secular politics, with the seven current GOP presidential aspirants spoon-fed questions sure to elicit pious replies, such as “When is the last time you cursed God?”

Watching the entire forum is only for those with strong stomachs. It opened with a prayer, which humorously singled out “donors.”

Mike Huckabee probably out-sermonized everyone else. After a distasteful question about who he’d call after the scenario of a horrific attack on Sept. 11, 2017, Huckabee said: “The very first call — you get on your knees and you make your call to God.”

Huckabee castigated seculars: “The greatest threat we have is loss of God consciousness, the fact that we don’t believe that we’re ultimately accountable other than to the people that we see.”

Putting dogma and “god” above people. Isn’t that the very essence of fundamentalism, and a disastrous recipe for religious intolerance and authoritarianism?

This event was sponsored by the Family Leader Foundation, led by Bob Vander Plaats. Check out Esquire’s “Dispatch from Des Moines” by Charles Pierce, “A particularly ugly dinner with Ted Cruz, Ben Carson, Mike Huckabee and the Gang”. Pierce warns: “If you are a Republican candidate for president, and you run afoul of Vander Plaats and his legions, you are not going to get out of Iowa alive.”

Annie Laurie Gaylor is co-president of the Freedom From Religion Foundation. She co-founded FFRF in 1976 as a college student with her mother Anne Nicol Gaylor. She served as the editor of FFRF’s newspaper, Freethought Today, from 1985-2009. She became FFRF co-president with Dan Barker in 2004. Annie Laurie has authored three books for FFRF: Woe to Women: The Bible Tells Me So; Woe to Women: The Bible Tells Me So; and Women Without Superstition: “No Gods – No Masters”, the first anthology of women freethinkers.
All Articles by this author
PrevPreviousHere’s to more Mormons waking up
NextAn open letter to Sheriff Jolley: taking Harris County, GA back to Jim Crow one sign at timeNext