The ‘War on Christmas’ is back — or rather, people are saying it’s back

The “War on Christmas” is fear-mongering drivel, as I’ve laid out repeatedly. It’s not even that scary as far as fear-mongering goes. The “war” talk dates to 2005 and was later discovered by Bill O’Reilly who, before he was ousted for sexual harassment to the tune of $32 million, ran with the fabricated war, sacrificing facts on the altar of ratings (it’s the Fox News way). 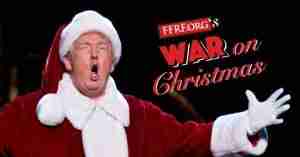 Bill O’Reilly called the Freedom From Religion Foundation, “the most aggressive” group fighting this war. And he would be right . . . if there were a war on Christmas. There’s not. There’s a war to uphold the Constitution, to enforce the First Amendment, to defend the wall of separation between state and church.

And even though O’Reilly declared victory a few years back — it’s easy to win a war that exists in your head, Bill — his friends continue to tilt at windmills.

Last night, Tucker Carlson took over the mantle of leading the counterattack on the “War on Christmas”:

Tucker Carlson: “We’re on the cusp of December and you know what’s coming, not just cold weather and shopping and carolling, but also new progressive attacks on Christmas. They mock the idea that there is a War on Christmas even as they wage it.”

Yes, Tucker, we mock the idea that fiction is reality.

So let me say again what I’ve been saying for years. There is no war on Christmas. But many Christians are waging a war on the Constitution. They are seeking to use a government belonging to We the People to promote their personal religious beliefs. They are abusing the power of their office because they’ve never been challenged. The war is not on Christmas, but on Christian privilege. And despite what Trump, Zinke and Tucker say, Christianity is losing.

The Freedom From Religion Foundation is a national nonprofit dedicated to keeping state and church separate and educating about nontheism. We depend on member support, please join today. We need you more than ever. Seriously, now is the time.

Andrew L. Seidel is a constitutional attorney and the Director of Strategic Response at the Freedom From Religion Foundation. His first book The Founding Myth: Why Christian Nationalism Is Un-American was burned by a Tennessee preacher. His second book, American Crusade: How the Supreme Court is Weaponizing Religious Freedom, is due out in 2022. He's won numerous academic awards and holds two law degrees: a J.D. magna cum laude from Tulane University Law School and an L.L.M. from Denver University’s Sturm College of Law. Andrew has a B.S. in neuroscience and environmental studies from Tulane. Before dedicating his life and law degree to keeping state and church separate, Andrew was a Grand Canyon tour guide and an accomplished nature photographer. Andrew has appeared on Fox News to debate Bill O’Reilly, MSNBC, and hundreds of other media outlets speaking on behalf of FFRF.
All Articles by this author
PrevPreviousBittersweet Memories
NextThe Supreme Court, Capitol displays, religious clubs, and Mark TwainNext