Gaylor to Gillibrand: Your bible is even worse than Trump!

Your avowal to President Trump that “You cannot silence me or the millions of women . . .” is inspiring, as is your forthright repudiation of Trump’s tweet about you as a “sexist smear attempting to silence my voice.”

But isn’t it imperative upon you to apply those same feminist standards to a book whose essence might best be described as a “sexist smear attempting to silence women’s voices”? That book happens to be the very one you were reported to be engaged in studying with a bipartisan congressional group when you first became aware of Trump’s Dec. 12 offensive tweet.

The book I am talking about is the bible.

It’s courageous and commendable to stand up to a sexist and lewd president, yet unfortunate that by your participation in a congressional bible study you appear to be blessing a book that has smeared women for millennia. As our great feminist foremother, Elizabeth Cady Stanton, put it in The Woman’s Bible: “. . . The Old and New Testaments contain . . . customs that degrade the female sex of all human and animal life, stated in most questionable language that could not be read in a promiscuous assembly, and call all this ‘The Word of God.’ ”

I defy even Donald Trump to trump the misogynistic biblical tirades against women. In your bible, women are routinely scapegoated and branded as “whores” and “harlots,” as “evil” temptresses, who even lie “in wait as for prey, and increase transgressors among men,” as Proverbs 23:27-28 puts it. “Her filthiness is in her skirts,” lewdly states Lamentations 1:8-17. Lessons of disrespect and contempt for women proliferate in the bible, which is full of petty putdowns and insults, stereotypes and demeaning advice about women’s “nature.” “Who can find a virtuous woman?” (Proverbs 31) Women are unclean. Even Mary is reputedly unclean after giving birth to Jesus! The bible promotes the Jezebel stereotype who “eateth and wipeth her mouth” (Proverbs 20:3, speaking of sexually free women).

Of special relevance in today’s #MeToo environment of unending revelations of sexual harassment and worse are the biblical sanctions of molestation, rape and sexual assault. Roy Moore is not just a product of the Religious Right, but of the bible. As a literalist, he sincerely believes civil law takes a back seat to his version of “God’s law,” and that law clearly defines women as male property to do with, in many instances, as men like. Biblical women are possessions: Fathers own them, sell them into bondage, even sacrifice them. Women are commanded to be inferior and subservient to their husbands. “To every man a damsel or two” (Judges 5:30) is a verse that typifies biblical law about sexual assault. Virgins are booty, the spoils of war. When nations rebel or displease the biblical lord, they’re referred to as lewd women, and graphic descriptions of their punishment, frequently sadistic and sexual, are offered.

The biblical deity himself is described as a rapist. In a distasteful passage in Isaiah, the biblical lord is shockingly described as punishing “haughty women” by smiting them and discovering their “secret parts” (Isaiah 3:16-17). Biblical imagery of women is often degrading and graphic: “I will discover thy skirts upon thy face. . .” (Nahum 3:4-6). The bible establishes woman’s inferior status, her uncleanliness, her transgressions and her God-ordained master/servant relationship to man, all by the third chapter of Genesis. Revilement of female sexuality reaches a particularly intemperate pitch in Proverbs, many of the prophecies and in the epistles of Paul.

“Let your women keep silence in the churches: for it is not permitted unto them to speak; but they are commanded to be under obedience as also saith the law.

“And if they will learn anything, let them ask their husbands at home: for it is a shame for women to speak in the church.” (I Corinthians 14:34-35)

The bible very brutally silenced women for more than 2,000 years, until our brave foremothers gathered the courage to rebel against church orthodoxy. Stanton, who launched the modern women’s movement and was condemned by younger feminists for authoring the critical Woman’s Bible, wisely noted of women that the less they believe, the better for their happiness. The Religious Right continues to rely on the bible as a handbook for women’s subjection in its quest to silence women, return them to kinder, kirche, kuche, and deprive them of reproductive rights and choice. 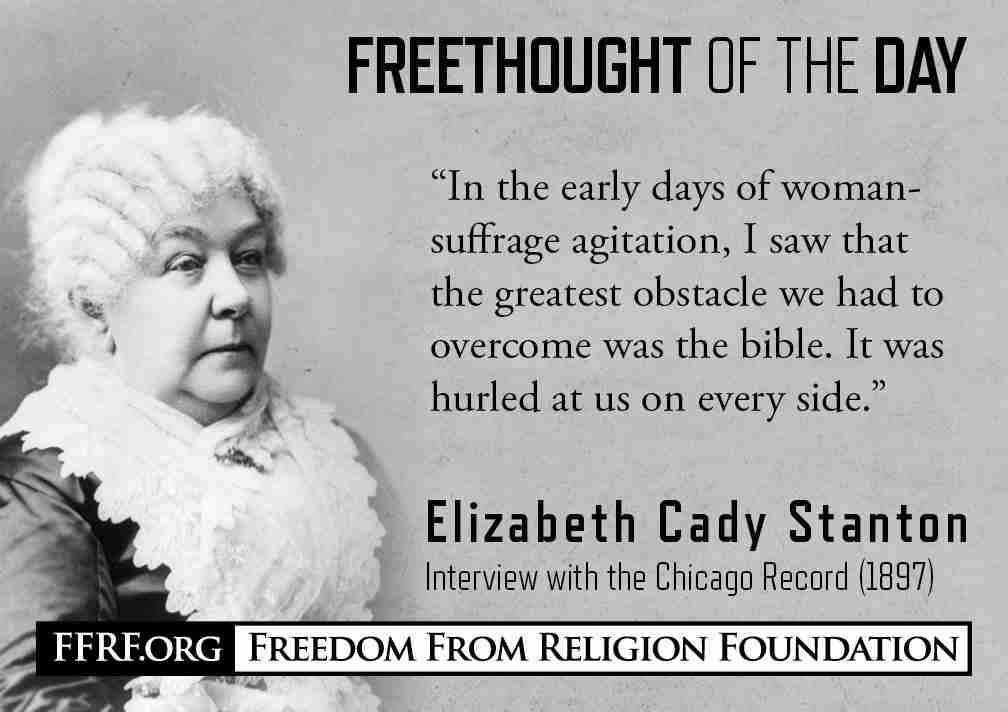 After reading the bible cover to cover, Senator Gillibrand, I concurred with my friend Ruth Green (author of The Born Again Skeptic’s Guide to the Bible) that felt the need to wash my hands in Grandma’s Lye Soap every time I opened that vaunted volume. I wrote a book, Woe to the Women: The Bible Tells Me So, sent to you under separate cover, to update Elizabeth Cady Stanton’s bible critique.  (If you are going to continue studying the bible, at least balance that reading to “know thine enemy.”) Suffragist and feminist Helen H. Gardener noted in her 1884 book, Men, Women and Gods, “Of all human beings a woman should spurn the Bible first.” Charlotte Perkins Gilman, the well-known turn-of-the-century feminist and reformer, pointed out that all “death-based” religions make the same mistake of turning women into servants. 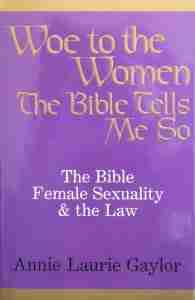 Senator Gillibrand, aside from the bible’s highly objectionable treatment of women, there is another major concern. It truly is neither appropriate nor seemly for members of Congress to engage in bible study on the job. The framers of our godless Constitution envisioned a nation where individuals would be free to believe or disbelieve, but where government would not be free to settle the question of who is right. These “bipartisan bible studies” clearly violate the spirit of the Jeffersonian wall of separation between church and state, appearing to single out one religion’s “holy” book and to confer official governmental support for the study and application of the bible.

One of the greatest disinformation campaigns civil libertarians confront today is the lie that our government is founded on God, religion, the bible and the Ten Commandments. When you join a congressional bible study you lend credence to the myth that America’s government is intended to be religious. You add fuel to Religious Right politicians who routinely promote “Year of the Bible” or other resolutions uniting the state with religion.

Senator Gillibrand, your actions are praiseworthy, but your bible is not. I urge you to send a message to the Religious Right and misogynists everywhere: Stop studying the bible. Denounce its sexism as you denounce political sexism. Look for inspiration to reason, compassion, feminist, humanist and Enlightenment values, not flawed and uneven Bronze Age teachings predicated on supernatural authority and the subjugation of women.

Annie Laurie Gaylor is co-president of the Freedom From Religion Foundation. She co-founded FFRF in 1976 as a college student with her mother Anne Nicol Gaylor. She served as the editor of FFRF’s newspaper, Freethought Today, from 1985-2009. She became FFRF co-president with Dan Barker in 2004. Annie Laurie has authored three books for FFRF: Woe to Women: The Bible Tells Me So; Woe to Women: The Bible Tells Me So; and Women Without Superstition: “No Gods – No Masters”, the first anthology of women freethinkers.
All Articles by this author
PrevPrevious’Tis the season . . . for clueless pious politicians
NextJanet Benshoof: A freedom fighter for women who opposed religious tyrannyNext