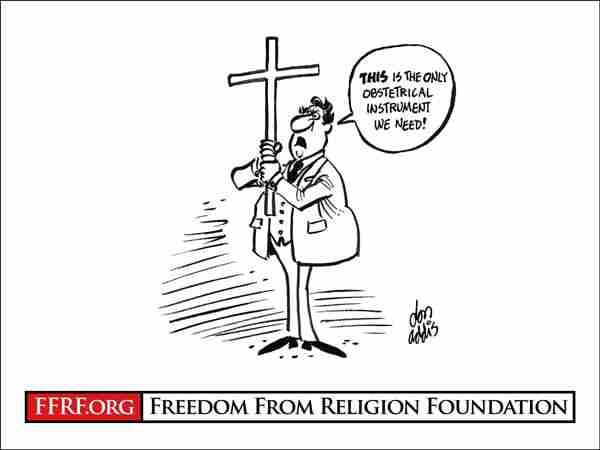 Abortion is extremely safe. In fact, researchers at the University of California San Francisco’s Bixby Center for Reproductive Health have determined that major complications from abortion occurs in less than a quarter of a percent of procedures. Comparatively, wisdom teeth removals and tonsillectomies have more complications. And yet, legislators do not add burdensome restrictions to wisdom teeth or tonsillectomy procedures. Instead, they make exceptions for abortion based on religious ideology. This must end.

Perhaps one of the most unduly regulated areas is the provision of abortion medication. Mifepristone, a prescription medication that is used to safely terminate early pregnancies, has been used by more than 3 million women in the United States for over 20 years. Women who are pregnant can safely use mifepristone, and its companion misoprostol, for up to 10 weeks of pregnancy. This method is 99.6 percent effective. For context, five men die from Viagra-related drug reactions out of every 100,000 prescriptions that are written. Additionally, every year there are 150 accidental overdoses of Tylenol that lead to deadly kidney failure. Adverse reaction rates in commonly used and prescribed medications like Lipitor (12.9 percent), Ritalin (3.1 percent), and Clarinex (10 percent) far exceed the adverse effects of mifepristone (.28 percent). And yet, these medications are not as nearly regulated as mifepristone.

Despite its safety and efficacy, the Food and Drug Administration (FDA) requires that the drug can only be obtained directly from a medical provider in a clinic, medical office or hospital. This means that it cannot be dispensed at retail pharmacies like most other medications. Instead, in 2007, the George H.W. Bush administration added mifepristone to the FDA’s Risk Evaluation and Mitigation Strategy program. This classification is typically for drugs with potentially serious complications, like opioids, antipsychotics and drugs that treat cancer and multiple sclerosis. It certainly should not be weaponized to block women’s health care.

Because of the Bush administration-initiated move, it is incredibly complicated to actually obtain mifepristone. For example, in Wisconsin, the home state of FFRF, women must have three in-person appointments: The first appointment is when the provider explains the abortion process to the patient. The pregnant woman must then return no sooner than 24 hours later to actually obtain the medication, a visit that can take up to three hours. The patient must again return for a third appointment within one-two weeks to ensure that the abortion is complete. Not only is this time-consuming, but it is expensive. Since Wisconsin is one of 34 states that does not cover abortion through Medicaid due to the religiously rooted Hyde Amendment, a medication abortion can cost anywhere from $500 to $2,000.

The American College of Obstetricians and Gynecologists (ACOG) supports the removal of mifepristone from this program: “In line with its safety record and to improve access, ACOG recommends that mifepristone for reproductive health indications be made available in retail pharmacies like other prescription drugs and without unique provider certification or patient consent requirements.” Additionally, in a recent New England Journal of Medicine commentary, health experts called on the elimination of mifepristone from the program. In the piece, the doctors and researchers explain that mifepristone is far safer than other prescriptions that are not regulated as heavily and that it is safer than childbirth. Indeed, childbirth is 14 times more dangerous than an abortion.

Medical abortion access is especially important during a pandemic that has claimed over 535,000 lives in the United States. In fact, the FDA provision was temporarily suspended in July when the American Civil Liberties Union filed a lawsuit on behalf of medical experts and reproductive justice advocates led by the American College of Obstetricians and Gynecologists. This meant that pregnant women could obtain mifepristone by telehealth and mail — making the entire process safer during stay-at-home orders.

However, in January, at the behest of the Trump administration, the ultraconservative Supreme Court, which consists of anti-abortion Christian nationalists like Amy Coney Barrett, reinstated these medically unnecessary provisions. As such, women must find child care, transportation, and make multiple trips to health centers during a deadly pandemic so that they can exercise their constitutional right to an abortion. One in five women has to travel  more than 43 miles for an abortion, and some much farther.

The time to permanently lift these unscientific, discriminatory burdens is now. There is no medical reason to prevent women from accessing mifepristone. Abortion is health care and a secular nation should use science to guide health care legislation — not religion. On Feb. 9, a group of Democrats urged Dr. Janet Woodcock, acting commissioner of the FDA, to lift these restrictions. Additionally, the Biden-Harris administration has the power to suspend enforcement of the in-person requirement for mifepristone, as well as initiate a comprehensive FDA review of all of the restrictions on mifepristone.

We must put the pressure on our legislators and presidential administration. Let’s demand that they stand up for science by protecting abortion care. We must make mifepristone accessible now.

In the meantime, consider supporting abortion funds like like the volunteer Women’s Medical Fund of Wisconsin. This volunteer fund was founded by FFRF’s principal founder Anne Nicol Gaylor. It helps an average of 900-1,000 Wisconsin residents obtain affordable abortion care. You can make a tax-deductible donation here.

BARBARA ALVAREZ is a contributing writer for the Freedom From Religion Foundation. Previously she had held the role as FFRF's inaugural Anne Nicol Gaylor Reproductive Rights Intern, a program set up to memorialize FFRF’s principal founder, who was an early abortion rights activist and author of the book Abortion is a Blessing. Barbara was a major winner in FFRF’s essay competition for graduate students, writing about the bible’s role in the abortion battle.
All Articles by this author
PrevPreviousMenstruation is a secular issue
NextEinstein was a brilliant skepticNext