FAQs about a post-Roe U.S. 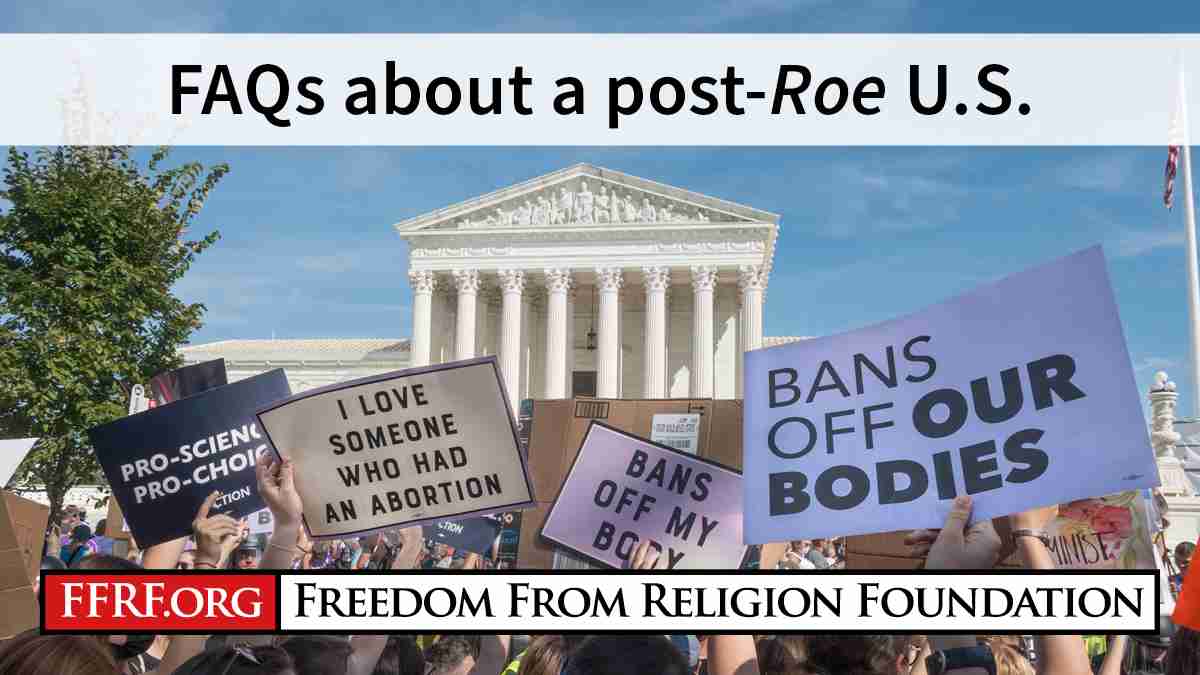 The U.S. Supreme Court is slated to determine the future of Roe v. Wade any day — and the future of abortion appears grim. How did we get here? What will be the consequences of banning abortion? And what can secular activists do? Here’s some background information and tips on how you can continue to defend abortion rights.

What is Dobbs v. Jackson Women’s Health Organization about? And why is it so consequential?
In 2018, legislators in Mississippi passed a law that prohibits abortion after 15 weeks of gestation barring rare instances. This law is counter to the U.S. Supreme Court’s 1973 decision of Roe v. Wade, which decrees that states cannot ban abortion before viability. Viability is generally considered to be about 24 weeks of gestation, but even then, medical experts explain that each pregnancy is unique. This was reaffirmed in 1992 in Planned Parenthood of Southeastern Pennsylvania v. Casey when the Supreme Court upheld Roe and its overall standards for viability. Unfortunately, that case also paved the way for a number of abortion restrictions prior to viability, such as unnecessary waiting periods.

The sole abortion clinic in Mississippi, Jackson Women’s Health Organization, and one of its doctors challenged the unconstitutional restriction in court. Both the U.S. District Court for the South District of Mississippi and the 5th U.S. Circuit Court of Appeals agreed that the law was unconstitutional. Nevertheless, the state appealed to the U.S. Supreme Court, which agreed to review it. Dobbs v. Jackson Women’s Health Organization is consequential because it is counter to nearly 50 years of long-held Supreme Court precedent. After the case was accepted by the high court, the state of Mississippi then directly asked the justices to overturn Roe altogether.

What will happen if the Supreme Court rules in favor of Mississippi?
In early May, a draft opinion was leaked in which the high court stated that it will overturn abortion in the United States. In the majority draft, Justice Samuel Alito penned, “We hold that Roe and Casey must be overruled” and that “Roe was egregiously wrong from the start.” Furthermore, the opinion calls to “return the issue of abortion to the people’s elected representatives.” Essentially, this would not only allow the Mississippi abortion ban to be in effect, but it would make abortion a state issue — leaving millions of people without access to abortion care.

What would a post-Roe country look like?
Since abortion would become a state’s issue, it will be protected in some areas of the country and highly restricted or outright banned in other areas. Abortion care is already unequal. For example, states like Texas, Oklahoma, and Idaho have draconian laws that ban abortion totally or at just six weeks gestation. These states also have bounty-hunting provisions that allow everyday citizens to enforce the law and earn thousands of dollars for successfully suing anyone for aiding and abetting someone in obtaining an abortion. This is horrifying and will get worse with the absence of Roe v. Wade.

For example, the Guttmacher Institute explains that 22 states have laws that could be used to restrict the legal status of abortion. Thirteen of these states have trigger bans, which are laws that will go into effect if Roe v. Wade is overturned. They are: Arkansas, Idaho, Kentucky, Louisiana, Mississippi, Missouri, North Dakota, Oklahoma, South Dakota, Tennessee, Texas, Utah and Wyoming. Seven states, including the Freedom From Religion Foundation’s home state of Wisconsin, have pre-Roe bans that could be enforced: Alabama, Arizona, Arkansas, Mississippi, Oklahoma, West Virginia plus Wisconsin. (Michigan has a pre-Roe ban that is temporarily enjoined by court order.)

For comparison, 16 states and the District of Columbia have laws that protect abortion rights.

This interactive map by the Guttmacher Institute gives a peek into what the current landscape of abortion in the United States is like and what is may look like in the future. As shown in the map, women in entire geographic regions will be without legal abortion care. This will create abortion deserts in which people have to travel at least 100 miles to the nearest abortion clinic. Currently, 27 cities in the United States are considered abortion deserts. This number will dramatically increase.

What happens when abortion is illegal?
Banning abortion does not advance health care. The Turnaway Study, a comprehensive analysis of what happens to women who are denied abortion care, has determined that preventing abortion leads to greater economic hardship and insecurity, a higher chance of staying in violent relationships, a negative impact on the financial well-being and development of children, and serious health problems for the woman.

We are seeing the harmful consequences of abortion restrictions in other countries. In Poland, a country that has banned abortion except in very rare circumstances, women are already unnecessarily dying in horrifying ways because doctors are too afraid to perform life-saving procedures. In El Salvador, a country that bans abortion in all cases, women have been imprisoned for decades simply for having miscarriages. In fact, the World Health Organization estimates that unsafe abortions are the leading cause for maternal deaths and morbidities.

And while the advent of abortion pills and activist organizations that facilitate information about abortion pills have made self-managed abortions much safer, women who are low-income and those who are minors or experiencing domestic violence are far less likely to be able to obtain abortion pills and self-administer an abortion privately and securely. Simply put, any and all forms of abortion bans are violent.

Why is this an atheist issue?
Abortion is health care. That has been affirmed by the U.N. Human Rights Committee, the American College of Obstetricians and Gynecologists, the American Medical Association, the American Society for Reproductive Medicine, the World Health Organization, Amnesty International and the American Civil Liberties Union, among other groups.

As a secular nation, our health care laws should reflect science — not religion. There is no evidence-based reason to ban abortions. In fact, extensive research has found that abortion restrictions are not rooted in science. And FFRF members agree: An overwhelming 98.9 percent support abortion rights.

Lastly, abortion is a common medical procedure. In fact, one in four women in the United States will have an abortion by age 45. This number does not account for trans and nonbinary people who also receive abortions. People of all backgrounds have abortions, including religious individuals.

The Religious Right is the only organized opposition to abortion care in the United States. For decades, it has passed harmful legislation. These include laws and amendments that allow physicians to refuse to perform an abortion on religious grounds, deny federal funding to low-income women, those on the Indian Health Service Plan, Peace Corps volunteers, and women in federal prisons and the military, and prohibit U.S. funding to any foreign nongovernmental organization that so much as mentions “abortion.” All of these restrictions have been done in the name of religion and have left millions of women without crucial abortion services, information, counseling and care.

What can FFRF members do?
These are indeed scary times. But we’re stronger together. There are several things that FFRF members can do to stand up for abortion rights.
1) Sign up for and utilize FFRF action alerts. The Freedom From Religion Foundation sends out action alerts that defend reproductive rights and we need all hands on deck. Your voice matters.
2) Speak to your friends, family and neighbors about protecting abortion rights. You can also read and share these blog posts with your networks. They cite evidence-based studies and research — not biblical scripture.
• Reproductive health is a state/church issue.
• Read my reflection on the bible and abortion legislation.
• To be anti-abortion is to be anti-science.
• Abortion bans further threaten victims of domestic violence.
• Abortion prohibitions would spike pregnancy-related deaths.
• This is the endgame for all of these abortion restrictions.
• We need to codify abortion rights.
• Here’s a guide for fighting for abortion rights alongside FFRF.
3) Submit a letter to your local newspaper.
4) Contact your representative.
5) Consider donating to the Women’s Medical Fund, which was co-founded by Anne Nicol Gaylor, FFRF’s principal founder, in 1972. One of the oldest abortion funds in the nation, it helps about 1,500 Wisconsin residents per year obtain abortion care. It is all-volunteer, with donations paying for abortion care. Make a donation, deductible for income-tax purposes.

There has never been a more urgent time to proclaim that abortion rights are secular values. The future is undoubtedly rocky. We’re grateful to have you by our side as we defend reproductive rights.

BARBARA ALVAREZ is a contributing writer for the Freedom From Religion Foundation. Previously she had held the role as FFRF's inaugural Anne Nicol Gaylor Reproductive Rights Intern, a program set up to memorialize FFRF’s principal founder, who was an early abortion rights activist and author of the book Abortion is a Blessing. Barbara was a major winner in FFRF’s essay competition for graduate students, writing about the bible’s role in the abortion battle.
All Articles by this author
PrevPreviousWayward officials, Catholic Church history, Jan. 6 Capitol attack and abortion rights
NextBush’s unfunny biblical Iraq War propheciesNext