The Facts vs. The O’Reilly Factor

Here, in honor of the toppling of Bill O’Reilly last week from Fox News Network, is an article I wrote after my first appearance on “The O’Reilly Factor” in the fall of 2000. (FFRF was unable to find a video link to this program.) 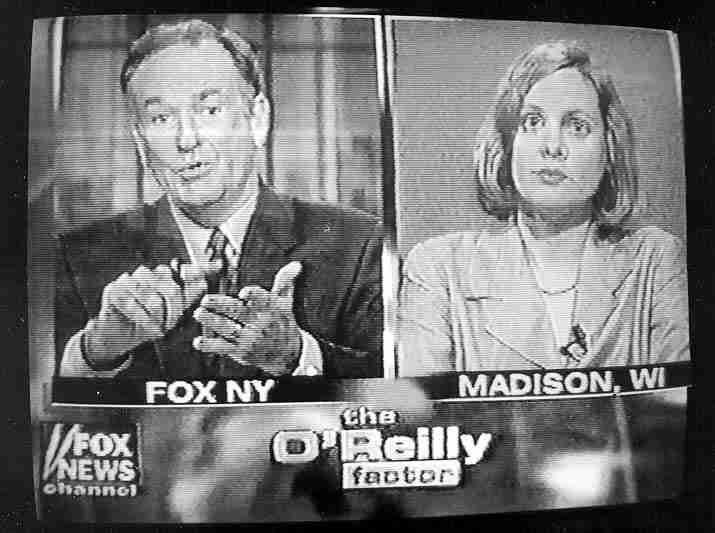 The day after Joseph Lieberman’s now-infamous remarks on religion to a black congregation in Detroit, I got a call from Fox TV network inviting me to appear on “The O’Reilly Factor.”

As I had never heard of this show, I couldn’t help asking the polite assistant: “The host isn’t one of these ‘hate radio’ types, is he?” I was assured that Mr. O’Reilly belonged more in the “devil’s advocate” category.

I was the only guest interviewed via satellite hook-up at a local studio for a five-minute opening segment, taped that afternoon and airing that night. The taping started with Bill O’Reilly’s opening editorial, called “Talking Points.”

He called it “ridiculous” and “madness” to contend it is “dangerous” to “talk about God and to pray in public,” attacking the recent court decision against student-led football prayers in public schools. “Spirituality is a positive in our selfish society and if that opinion hurts somebody’s feelings, I’m not sorry at all.” Then he introduced me, and the fireworks began.

Although I felt brow-beaten during the quick interview, I left the studio mostly bemused.

At 7 p.m. we turned on the TV to watch how it came off. A teaser on Lieberman, O’Reilly’s editorial and my interview started the show. When an increasingly excited O’Reilly proceeded to call me “crazy” for correctly stating there were no prayers at the Constitutional Convention, my shocked 24-year-old stepdaughter Kristi loyally exclaimed, “Dad, you shouldn’t let him treat her that way!” Even cool and collected Dan shook his head in amazement.

I have to admit I was surprised when my November Brill’s Content informed me that O’Reilly appears on its list of this year’s top 50 influential members of the media, and that his book is on the New York Times bestseller list. I thought readers might be interested in what O’Reilly’s “influential” views are. Here is the transcript from the interview:

O’Reilly: Now our story tonight: Senator Joseph Lieberman’s spirituality on the campaign trail. Some people don’t like the fact that he often talks about God.

(Videotape of Lieberman in a church, saying, “I hope that it will reinforce a belief, that I feel as strongly as anything else, that there must be a place for faith in America’s public life.”)

(Different cutaway of Lieberman: “The profound and ultimately most important reality is that we are not only citizens of this blessed country, we are children of the same awesome God.”)

O’Reilly: Joining us now from Madison, Wisconsin, is Annie Laurie Gaylor, co-founder of the Freedom From Religion Foundation. So you have a beef with Senator Lieberman?

O’Reilly: I didn’t hear him say that, Ms. Gaylor.

Gaylor: Yes, he said there is freedom of religion but no freedom from religion.

O’Reilly: But I didn’t hear him say that nonbelievers were less equal than believers, did you?

Gaylor: This is certainly the implication–

O’Reilly: Oh, the implication? Ok. All right, go ahead.

O’Reilly: All right. But if 90 percent of the population of America believes in God, as they do, the polls show that, and if the founding fathers based the legal system on Judeo-Christian tradition–

O’Reilly: –which they did–

Gaylor: No, they certainly didn’t.

O’Reilly: Oh, yes they did. I mean, look. Anybody who reads history, who reads the letters of Thomas Jefferson to James Madison, knows that the framers of the Constitution took into account the Ten Commandments and basing the religious aspect of the government, in the sense that they say this is right, this is wrong, this is what they do and this is what they don’t do.

Gaylor: No, I think that Senator Lieberman and you, possibly, have never read our U.S. Constitution–

Gaylor: It is a godless Constitution, and the only references to religion in it are exclusionary. And if you contrast our Bill of Rights, which is couched in positives, the rights we have, versus the Ten Commandments, which are all negative, I think you can see no comparison. There is no religion in our Constitution, and we should be proud of the fact that we were the first country to adopt a secular Constitution.

O’Reilly: Well, look. In every meeting of the framers they had a prayer.

Gaylor: No, that was–

O’Reilly: Yes, they did!

O’Reilly: Yes, they did! In the records of the meetings there is the prayer, Ms. Gaylor.

Gaylor: No, no. Ben Franklin said that they should pray and there was nobody else who wanted to and it’s in his records–

Gaylor: You’re confusing the Articles of Confederation with–

Now, Senator Lieberman. We may disagree on this and I’m not saying that you’re not entitled to your opinion, but I’m quoting historical documents, and if you’re going to say that I’m wrong, I’m going to say you’re crazy.

But, in this case, Senator Lieberman is basically saying, exercising his freedom of speech, by giving his opinion of what America is and should be. What’s wrong with that?

Gaylor: He has crossed the line, not only of what is proper for a politician but what is good manners. I mean we’ve all been told you don’t bring up religion at a party or social gathering, and he’s simply pandering. And he’s running as Mr. Holier-Than-Thou–

Gaylor: –to pander to voters.

O’Reilly: Let’s make it a little personal. If I run for office and I say, you know, one of the reasons I want to be in a position of power is to help other people, because I’m a follower of Jesus Christ and that’s what he did, am I wrong?

Gaylor: Well, I think that is what George Bush has said, and many people are very alarmed–

O’Reilly: Are you? Would you say I would be wrong to say that?

Gaylor: I think that if you, at every opportunity, would preach at people who are basically a captive audience, using–

O’Reilly: No, I’m not preaching, I’m just saying I want to help people, because Jesus Christ did.

Gaylor: You are a public servant. You are running for an office that is paid with tax dollars–

Gaylor: –and you have no business telling people what religion they should–

O’Reilly: I’m not telling people anything. I’m telling you what I believe, and you’re trying to deny my freedom to do that.

Gaylor: And I think that everyone should beware of pious politicians–

Gaylor: And it does raise the question, why does Senator Lieberman–

O’Reilly: You say they shouldn’t be able to say that, and that’s wrong.

O’Reilly: Well, Ms. Gaylor, we respect your opinion. I think you’re absolutely dead wrong about your history and I hope you’ll go back and read it, and perhaps we’ll have another discussion.

O’Reilly: I have, many times. Thank you very much for appearing.

For the record, of course I think candidates may express, but should not campaign on, their views on religion, although I prefer the Bill Bradleys of the world who keep it to themselves.

After the show aired, I went out for some errands. When I got back, Kristi informed me a woman had gone to the trouble of hunting me down and calling long distance to argue. When Kristi told her I wasn’t home, she tried to argue with Kristi, saying I was too ignorant to be allowed on “national TV,” and concluding her rant with this clincher before slamming down the phone: “You tell that Annie Laurie Gaylor for me that she gives blondes a bad name!” (Which is a neat trick, considering I’m not blonde.)

I was surprised how many acquaintances caught the show. We also heard from people around the country who wanted to learn more about our group, and received an email from Civil Libertarian Nat Hentoff, who kindly faxed his column to us on the Lieberman matter.

Liz Uhr, a longtime volunteer at our office (and one of the smartest and best-read women of my acquaintance), had the moxie to tune in the show the following day, convinced O’Reilly would have to retract. She turned out to be right in her hunch, although the “retraction” left something to be desired.

“Well, I hope you saw our report last night about politics and religion,” O’Reilly said. “I was so steamed after the segment that I decided to make it the subject of this evening’s Talking Points memo. My guest was Annie Laurie Gaylor, the co-founder of the Freedom From Religion Foundation. Ms. Gaylor’s contention is that the founding fathers wanted no spirituality whatsoever associated with the governance of America. I said she was flat out wrong.

“Now after the program I went home and hit my library.” What followed was self-serving, but O’Reilly did sneak into the middle of it a semi-mea culpa: “The Constitution itself is a secular document. . .”

Sometimes, in this business of educating about the separation of church and state, we have to be content with tiny victories.

Annie Laurie Gaylor is co-president of the Freedom From Religion Foundation. She co-founded FFRF in 1976 as a college student with her mother Anne Nicol Gaylor. She served as the editor of FFRF’s newspaper, Freethought Today, from 1985-2009. She became FFRF co-president with Dan Barker in 2004. Annie Laurie has authored three books for FFRF: Woe to Women: The Bible Tells Me So; Woe to Women: The Bible Tells Me So; and Women Without Superstition: “No Gods – No Masters”, the first anthology of women freethinkers.
All Articles by this author
PrevPreviousWe’re tanglin’ and tusslin’ on your behalf
NextWe enjoy being in the spotlightNext