Existentialism: a philosophy for secular humanists 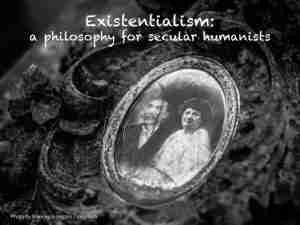 When I came of age in the 1950s and began to think about life, I developed a strange feeling that the world is senseless, irrational, chaotic.

Tens of millions had just been killed in World War II, and everyone said how noble and heroic it was. But the “Big One” was only the latest of innumerable gory wars stretching back before the earliest written records began. Honduras and El Salvador fought a 1969 war over a soccer match. England fought one with Spain in the 1700s because a British ship captain’s ear was cut off by Spaniards. I wondered if this was what people do to each other: send their patriotic young men to kill other young men who feel just as patriotically for the opposite side?

I also observed three-fourths of humanity praying to invisible spirits and hoping to go to magical heavens. Politicians invoked the gods, but without evidence that any of it’s real. I thought: It is crazy to worship something that probably doesn’t exist — yet billions of people do it.

I witnessed the cruel unfairness of life: How some are blind or killed by drunken drivers or dragged down by wasting diseases, while others are not. It’s an incomprehensible lottery: Spin the wheel to see whether you’ll have a long, healthy life or die early in agony.

Our lives are just brief blips in the enormous span of human history. We could have been prehistoric primates — or medieval serfs — or people centuries in the future — serving our short stays, then gone. Sometimes it boggles me to realize that people during the Crusades or bubonic plague times or the Civil War tried just as fervently to cope with their daily lives and problems as we’re doing today in the middle of a pandemic. Then death erased them.

When a life is over, the question lingers: Was there any point, really? Was it all meaningless? What was achieved by the lifelong hassle of earning money, raising children, fending off illness, and finally succumbing? I guess the answer is: Each person’s life is intensely real and vital to him or her while it’s in progress — then it ends. Afterward, did it really matter?

That was my confused and bemused condition in the 1950s, when existentialism burst onto the global scene like a tidal wave of new thinking.

It said, yes, life is absurd and ultimately pointless. We find ourselves living lives, but we don’t know why we are here. We are doomed to die without ever knowing why we were “thrown into the world.” The only thing we have is our own individual lives, which are temporary. We exist — period — which provides the name: existentialism. We are “condemned to be free,” to live inside our own minds and skulls, separated from others.

And yet, no matter how much chaos and cruelty are around us, each of us has no choice but to formulate values and decide how we will behave, personally. We must craft an “authentic” life for ourselves, regardless of what the surrounding society does.

I once saw the absurdist play “Waiting for Godot,” in which nothing really makes sense, nothing is quite understood, everything is confused and uncertain (with patriotic-sounding political language that actually is gibberish). I thought the play was a brilliant reflection of daily reality. When I was a kid in the 1930s, there was a Gene Ahern comic strip in which a bearded little man always said “Nov shmoz ka pop.” Eventually, I latched onto it as a marvelous expression of meaninglessness.

Somehow, existentialism seems a perfect philosophy for secular humanists — for nonconformists who can’t embrace the majority god-chanting and war-fever chest-thumping and entrenched unfairnesses of society all around them. It’s for misfit thinkers who see the world as half-loony, so they each seek a private, personal path, outside the mainstream, trying to be honest and devoted to values that seem right to them alone.

This piece is adapted and updated from a column in the April-May 2013 issue of Free Inquiry.

James A. Haught, syndicated by PeaceVoice, was the longtime editor at the Charleston Gazette and has been the editor emeritus since 2015. He has won two dozen national newswriting awards and is author of 12 books and 150 magazine essays. He also is a senior editor of Free Inquiry magazine and was writer-in-residence for the United Coalition of Reason.
All Articles by this author
PrevPreviousTax dollars shouldn’t finance fake abortion clinics
NextMultibillion religious giveaways, billboards, masks — and a perfect philosophyNext