Einstein was a brilliant skeptic 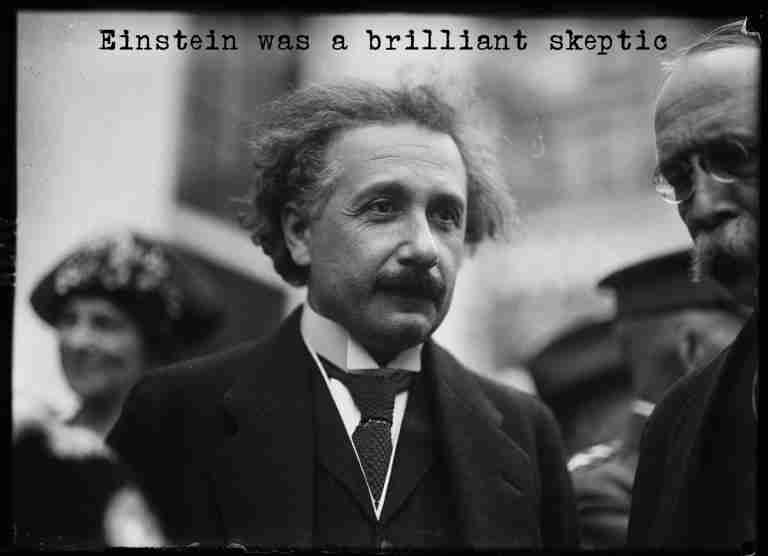 Everyone, everywhere knows of Albert Einstein, whose birth anniversary we celebrated a few days ago, as a worldwide symbol of scientific genius. What is less known is his skepticism.

Einstein sometimes used the word “God” to mean the amazing laws of the universe, but he was a functional atheist. For example, he wrote in The New York Times in 1930: “I cannot imagine a god who rewards and punishes the objects of his creation, whose purposes are modeled after our own — a god, in short, who is but a reflection of human frailty. Neither can I believe that the individual survives the death of his body, although feeble souls harbor such thoughts through fear and ridiculous egotism.”

Even his work — the range and the brilliance — is ironically little understood. Of course, a lot of people remember that his famed 1905 equation E=MC2 — showing that a small amount of matter can be transformed into a stupendous amount of energy — paved the way for nuclear power and bombs. But otherwise, even well-educated folks often are vague about all that Einstein did to become the planet’s most famous scientist. I’ve read a simplified book, Essential Einstein, and distilled this thumbnail sketch:

Between 1902 and 1909, while living in Bern, Switzerland, Einstein published 32 scientific papers. In 1905, his “miracle year,” he stunned the world with four revolutions plus another work:
— Photoelectric effect: He confirmed quantum theory by showing that light is quantized, traveling in individual energy packets, photons, that cause electrons to pop randomly from metal. For this, he got the 1921 Nobel Prize in physics.
— Special Relativity: After the 1887 Michelson-Morley experiment showed that the speed of light is absolutely constant, Einstein deduced that everything else must vary as speed increases: Time slows, mass increases, dimensions shorten in the direction of movement. This has deep philosophical implications because it shows that reality isn’t as fixed and tangible as we think it is. Many modern tests have confirmed the weird changes.
— Interchangeability of matter and energy, as demonstrated by his renowned equation E=MC2.
— Brownian motion: Einstein confirmed the theory of atoms by showing that gases and liquids consist of vast numbers of hypersmall invisible particles darting and ricocheting.
— Dimensions of molecules: His doctoral dissertation showed how to calculate the size of molecules and Avogadro’s number, the tally of molecules in a quantity of gas called a mole.

In subsequent years, he engaged in a cavalcade of similarly groundbreaking research:

1906 — A paper on heat radiation.
1907 — The Equivalence Principle, in which Einstein showed that gravity and acceleration are indistinguishable in effects they produce.
1910 — A paper on opalescence, the scattering of blue in the daytime sky.
1911 — His famous theory that gravity bends light waves, which was confirmed during a 1919 eclipse when astronomers saw that stars behind the masked sun’s position appeared slightly out of place.
1915 — General Relativity, showing that gravity from matter warps space around it.
1917 — Einstein mostly started the field of cosmology by applying General Relativity to the entire universe. This work contained predictions of black holes and the expanding universe.
1925 — Bose-Einstein condensate: He joined Indian physicist Satyendra Bose in hypothesizing a fifth state of matter (after solid, liquid, gas and plasma). If matter is cooled to near absolute zero, they predicted, quantum effects will take over, giving it weird behavior such as climbing out of its container. This was achieved in 1995 by three U.S. physicists who won the 2001 Nobel Prize for it.
1936 — Gravitational lens: Einstein predicted that gravity from whole galaxies or clusters of galaxies would bend passing light so much that distant stars could appear in several places simultaneously. Now such “Einstein rings” and “Einstein crosses” are found in the sky.

Despite his astounding intellect, Einstein had gentle humility and the ability to laugh at himself. The shaggy genius — who wore proper suits when young but progressed to wild hair and sweatshirts — is also known for his humanitarian pursuits such as his anti-war campaigns and attempts to establish a world government.

He was a marvel, perhaps history’s greatest example of profound capability within the human mind. And he was a skeptic on top of that.

This article is adapted from a piece that originally appeared in the Charleston Gazette-Mail on July 6, 2008.

James A. Haught, syndicated by PeaceVoice, was the longtime editor at the Charleston Gazette and has been the editor emeritus since 2015. He has won two dozen national newswriting awards and is author of 12 books and 150 magazine essays. He also is a senior editor of Free Inquiry magazine and was writer-in-residence for the United Coalition of Reason.
All Articles by this author
PrevPreviousFDA’s regulation of abortion medication is unscientific
NextHappy spring: Victories, denunciations, court cases and multimedia treatsNext