This year, Easter falls on April Fools’ Day, a delightful coincidence that turns the tables on Christians. Jesus’ pundits have been saying for years that atheists do actually have a holiday, April Fools’ Day. That old biblical canard, “The fool hath said in his heart, there is no God,” gets thrown our way quite a bit, especially as March, lamblike, bids farewell. My response is usually “ … and the wise man says it out loud, ‘There is no God.’” The rejoinder once silenced a member of the obnoxious Westboro Baptist Church.

Last year, Fox News’ Todd Starnes took this tiresome swipe in a story about FFRF. (Starnes’ story misstated the facts; the city did wisely accede to FFRF’s request to remedy this violation.)

And here’s Matt Barber, when he was at Liberty Counsel, also invoking FFRF by name to make the same lame crack:

Of course, Christians who deliver this line from Psalm 14 as though throwing a punch tend not to know what Jesus says in the Book of Matthew. He warns: “Anyone who says, ‘You fool!’ will be in danger of the fire of hell.” Yes. According to the author of Matthew, Jesus thinks the Psalmist is burning in Hell. Later in Matthew, Jesus calls people “blind fools,” so I guess he’s in Hell too. The more one reads the bible, the more its contradictions seem to breed like bunnies.

The Council of Nicaea in 325 set that floating date to coincide with pagan celebrations of spring and rebirth. Christianity deliberately imposed one of its holy days on non-Christians to ease conversions. The vernal equinox/full moon date aren’t the only profane artifacts on the Easter holiday. Eggs are a symbol of fertility and bunnies are popular not because they were present at the crucifixion, but because their procreative abilities are legendary.

It’s easy to see the council’s thought process: “Hey, these heathens already celebrate rebirth and spring, so what if we say that our guy was reborn — resurrected — at this time too? A spoonful of sugar and all that …”

But of course, they can only celebrate the resurrection after first celebrating the death of their god. I’ve always thought “Good Friday” showed the moral bankruptcy of Christianity: What kind of faith celebrates the murder of an innocent as “good”?

In honor of this odd holiday season, I read Killing Jesus: A History by Bill O’Reilly and Martin Dugard. The book is history the way Fox News is news — it’s not. Basically, O’Reilly and Dugard claim the book is real history, not just religion, and then proceed to retell stories from the bible. They salt in a few facts and a lengthy digression on Julius Caesar that has no relevance to make the book seem legit. It’s anything but. 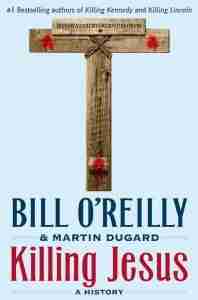 Here is the final, big point O’Reilly wants to make:

“There is no doubt that Jesus of Nazareth is the most famous human being the world has ever known. But Jesus had no infrastructure. He had no government behind him. He had no corporation . . . In the history of mankind, no one has achieved worldwide fame with no outside resources whatsoever.”

It’s hard to believe a Catholic wrote that paragraph. Jesus was not famous during his lifetime — at all. There are no contemporary accounts of Jesus’ life. Even O’Reilly twice points out in his book that Jesus came from a “backwater.”

What made Jesus famous was precisely what O’Reilly says he did not have: infrastructure, government, and a corporation. From the time the Roman Emperor Constantine converted and Christianity became the official religion of the Roman Empire, Jesus had one of the most powerful governments and infrastructures behind him, even if it was long after he was supposedly around. And even after the political aspects of that empire crumbled, the Catholic Church — a corporation if there ever was one — has persisted to press Jesus’ case.

Oh, and MIT says that Aristotle and Plato are both more famous than Jesus, and they genuinely lacked an empire or a worldwide framework of churches to impose their word with law, sword and fire. Which makes O’Reilly wrong on all counts.

The prattling of O’Reilly, Barber and Starnes brings to mind a passage I occasionally ponder, not from scripture, but from H.L. Mencken: “Before a man speaks it is always safe to assume that he is a fool. After he speaks, it is seldom necessary to assume it.” These three apostolic pundits have removed all doubt.

The best encapsulation of being an atheist on April Fools’ Day, especially an atheist who explains laws or facts or integrity to the likes of these pious windbags, was penned by Euripides in Bacchæ, some 400 years before Jesus was supposedly conceived, “Talk sense to a fool and he calls you foolish.” This too, is a lovely rejoinder to the Psalm 14 line. Use it well. 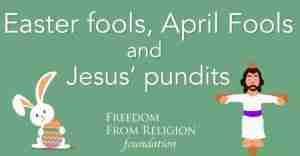 Andrew L. Seidel is a constitutional attorney and the Director of Strategic Response at the Freedom From Religion Foundation. His first book The Founding Myth: Why Christian Nationalism Is Un-American was burned by a Tennessee preacher. His second book, American Crusade: How the Supreme Court is Weaponizing Religious Freedom, is due out in 2022. He's won numerous academic awards and holds two law degrees: a J.D. magna cum laude from Tulane University Law School and an L.L.M. from Denver University’s Sturm College of Law. Andrew has a B.S. in neuroscience and environmental studies from Tulane. Before dedicating his life and law degree to keeping state and church separate, Andrew was a Grand Canyon tour guide and an accomplished nature photographer. Andrew has appeared on Fox News to debate Bill O’Reilly, MSNBC, and hundreds of other media outlets speaking on behalf of FFRF.
All Articles by this author
PrevPreviousAn Atheist visits the Museum of the Bible
NextNot fooling around on April Fools’ and EasterNext