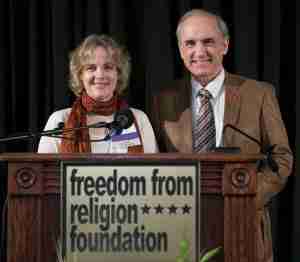 Way back in August, Mary’s Gourmet Diner in Winston-Salem, N.C., agreed with the Freedom From Religion Foundation that all of its customers should be treated equally instead of some receiving a 15% discount for “praying in public.” FFRF Staff Attorney Liz Cavell had contacted the diner after receiving multiple complaints to inform it that anyone’s free to pray over meals, naturally, but that as a place of public accommodation under the federal Civil Rights Act, Mary’s Gourmet Diner “may not lawfully offer a discount only to customers who pray. Any promotions must be available to all customers regardless of religious preference or practice on a non-discriminatory basis.”

The practice was so ingrained and formal that the diner’s receipts even had an automated “15% praying in public” line! After the owner of Mary’s Gourmet Diner (grudgingly) did the right thing, FFRF members around the country were encouraged to thank her, and locals were encouraged to patronize her establishment.

Although FFRF’s legal staff almost exclusively handles cases involving Establishment Clause violations, we make one exception. That is for violations of the Civil Rights Act. The Civil Rights Act in relevant part reads: “All persons shall be entitled to the full and equal enjoyment of the goods, services, facilities, privileges, advantages, and accommodations of any place of public accommodation . . . without discrimination on the ground of race, color, religion, or national origin.”

We receive complaints around the country from nonbelievers encountering “church bulletin discounts,” usually at restaurants or ballparks on Sundays, wherein church-goers get tasty 10-20% discounts by places of public accommodation for demonstrating they are church-goers or otherwise religious. That means non-church-goers get charged 10-20% more. That’s not only discriminatory, it’s illegal. Last year, Liz sent out 28 letters to violating establishments, and this year 20, educating them on the law and its importance.

The diner’s discount and our complaint made national news last summer, but we were surprised when “The Daily Show” came sniffing around this old news story last month. Dan Barker, FFRF co-president, agreed to fly to New York City, having taped one previous “fake news” segment that, if not sympathetic, at least was rather silly and fun. As the terms of being interviewed, Dan and other “Daily Show” interviewees sign away any rights, including giving the “The Daily Show” the right to edit the interview any way they want, such as showing Dan answering one actual question with another answer. It’s comedy, not news. Dan was interviewed by an in-your-face host for almost two hours. The spin on the segment, aired last night, was not just unsympathetic, but this time, frankly, not very funny. The punchline to Dan was: “You’re a dick.”

Dan’s point, made repeatedly during the interview, but not used, was: “If you think the Civil Rights Act is petty, then our complaint was petty.”

It’s time for a quick reminder about why FFRF does not consider such illegal promotions as petty, and why, on behalf of complainants around the country, we contact restaurants, recreational facilities and ballparks that illegally reward believers with discounts in violation of the Civil Rights Act.

The most outrageous example I’ve been involved in concerned my attempt to have FFRF send congratulatory flowers to Jessica Ahlquist in January 2012, after a federal court ruled in her favor against a prayer banner at her Rhode Island high school. We had to go out of state to get our flowers delivered to Jessica, after four Rhode Island florists refused us service.

Sean Condon, with Glimpse of Gaia, the Connecticut shop that accepted our order, turned out to be a student of history. He placed a statement on the shop’s website explaining the Civil Rights Act:

Instead of flower delivery being denied, [what if it was] something more important? Should this young lady be denied food because of her legally expressed opinion? What about housing? How about fuel when her car is close to empty and it’s a frigid evening? What about medical care? Is this the kind of society in which you would want to live?
Think back to the days before 1964 when black Americans were routinely denied service, motel rooms, food, gas, when travel turned into a treacherous journey of danger, uncertainty and deprivation

A few freethinkers or bloggers have suggested that civil rights violations aren’t worthy of FFRF’s attention, that we should “pick our battles” (as if we don’t already!), that negative reaction to such complaints makes atheists even more unpopular. So . . . should we blame victims? Empower hecklers with a veto? Would anyone call it trivial if a restaurant rewarded customers for being white with 20 percent off every Sunday brunch? The discriminating restaurateurs are not only violating the law, they’re the ones displaying bad manners, not FFRF. It’s simply not nice to say “We like our religious customers best and we’re going to charge you more for the same service.” At FFRF, we like to say there is nothing as important as working to uphold the First Amendment. But maybe there is something equally precious — working to uphold the Civil Rights Act.

FFRF and our activists are not pursuing remedy of violations to be popular, or unpopular, for that matter. As Susan B. Anthony wisely noted: “Cautious, careful people always casting about to preserve their reputation and social standing, never can bring about a reform. Those who are really in earnest must be willing to be anything or nothing in the world’s estimation, and publicly and privately, in season and out, avow their sympathy with despised and persecuted ideas and advocates, and bear the consequences.”

We’re working to uphold essential principles of law that protect us all. Although constitutional law is not undertaken to gain social acceptance, history shows that standing up for one’s rights — as demonstrated by the civil rights and gay rights movements — is actually the surest path toward gaining social acceptance.

Annie Laurie Gaylor is co-president of the Freedom From Religion Foundation. She co-founded FFRF in 1976 as a college student with her mother Anne Nicol Gaylor. She served as the editor of FFRF’s newspaper, Freethought Today, from 1985-2009. She became FFRF co-president with Dan Barker in 2004. Annie Laurie has authored three books for FFRF: Woe to Women: The Bible Tells Me So; Woe to Women: The Bible Tells Me So; and Women Without Superstition: “No Gods – No Masters”, the first anthology of women freethinkers.
All Articles by this author
PrevPreviousLet’s hear it for biblical blasphemy!
NextPopes, misquotes, dogs and heavenNext