Doing our patriotic duty this Fourth of July

Here at the Freedom From Religion Foundation, we were in a Fourth of July spirit this week.

That’s why FFRF kicked off its 2018 voter registration campaign, in conjunction with other leading national secular groups, in picturesque Coeur d’Alene, Idaho. FFRF is proud our Inland Northwest Freethought Society chapter was first in the nation to hold an official voter registration drive as part of Secular America Votes.

“Never has it been more critical to use the ballot box to stop the encroachment of religious zealotry into our secular government,” FFRF Co-President Dan Barker remarked. 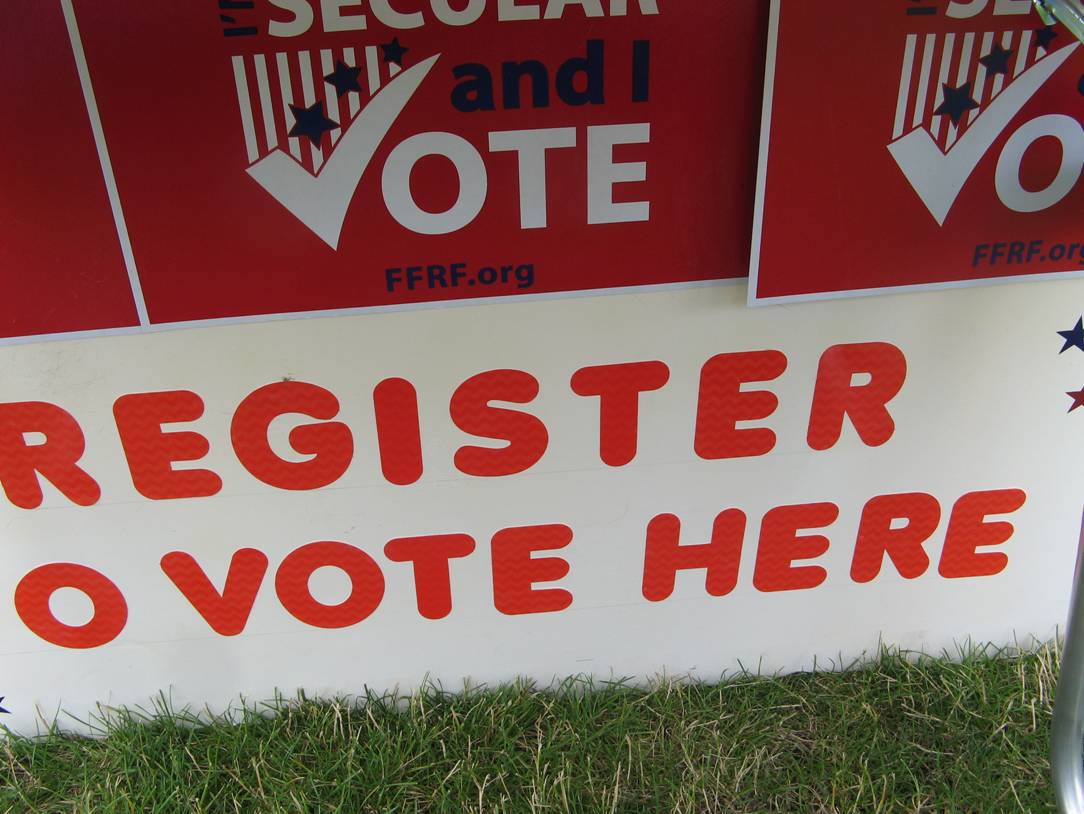 And channeling our patriotic energy, we refuted the distortions that Hobby Lobby propagates annually in a nationwide newspaper ad to misleadingly claim that this country has a Christian foundation. With the help of generous members, we ran impressive ads of our own in the Eugene, Ore., and the Peoria, Ill., papers. “When readers take a look at the Hobby Lobby full-page ad, they should cross-check its claims against FFRF’s website — important when a notorious fundamentalist corporation promotes a version of history that is at odds with reality,” warns FFRF Director of Strategic Response Andrew L. Seidel. 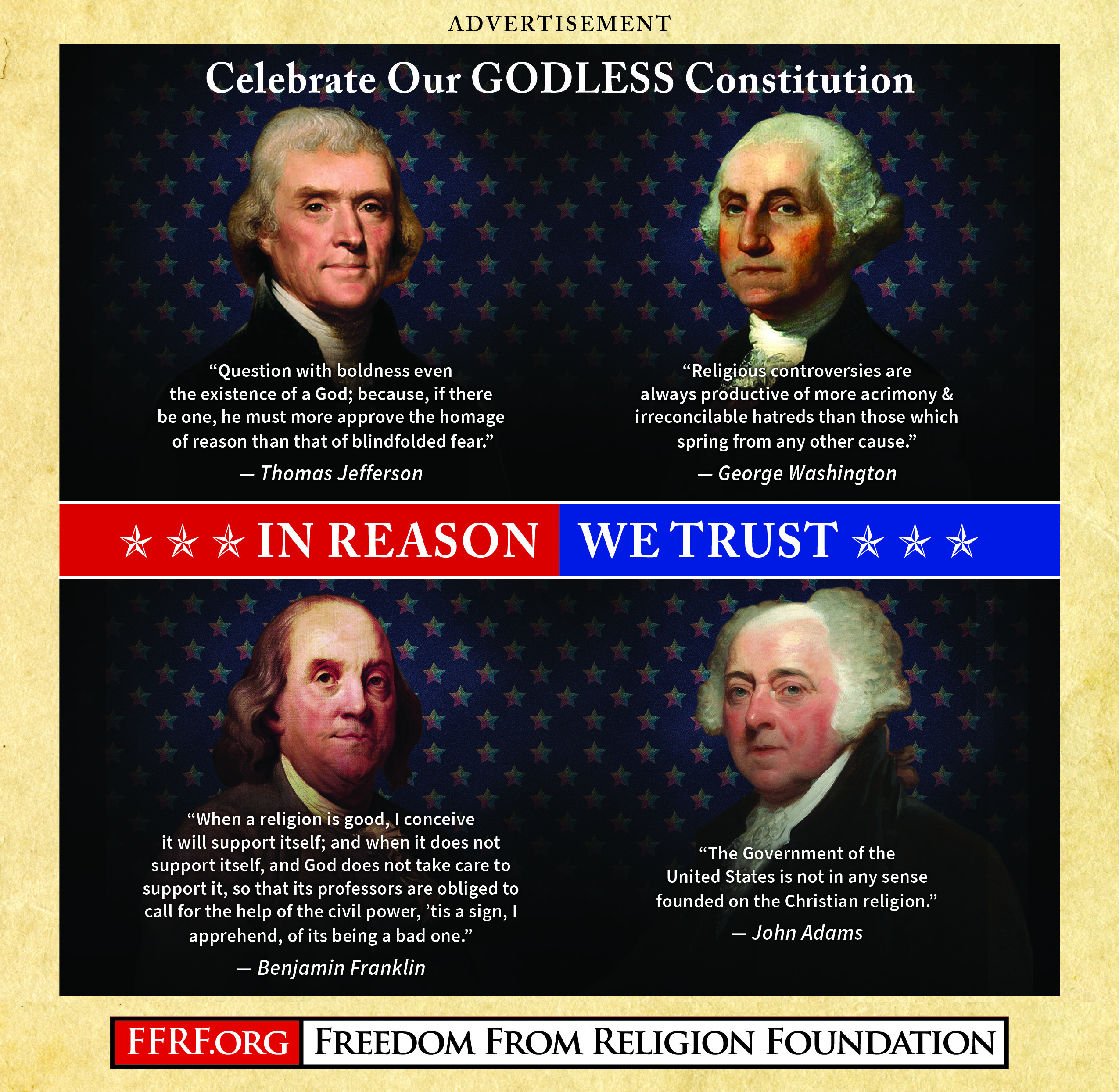 Andrew has a fun mini-tutorial on the actual (not made up) history of our country’s founding, which you can watch in our “Newsbite” segment.

We chatted with members of Congress
Andrew recently bore more than his fair share of the civic burden. He appeared on the audio podcast of U.S. Rep. Jared Huffman, a founder of the new congressional Freethought Caucus (and a speaker at our November San Francisco convention) along with another member of Congress and co-chair of the caucus, Jamie Raskin. Listen in on their fascinating conversation.

And we chastised unscientific senators
We were supercharged with civic fervor this week. That’s why Co-Presidents Dan Barker and Annie Laurie Gaylor wrote a letter to four senators (Ted Cruz and Rand Paul among them) asking them to stop targeting the National Science Foundation for its climate change research.

Good riddance to bad Pruitt
So you can imagine how big a sigh of relief we exhaled when EPA Administrator Scott Pruitt — a theocrat who showed disdain for basic science and common sense — headed to the exit. “The damage that Pruitt has done to our environment and the EPA is incalculable,” said FFRF Co-President Annie Laurie Gaylor. We’ve been battling Pruitt ever since he was Oklahoma AG. Alas, poor Scott, we knew you well.

Asia Argento isn’t a witch!
Our summer Editorial Intern Paul Epland has been with us just a few days but has been quick off the blocks. He wrote interesting blog defending the deceased celebrity chef Anthony Bourdain’s girlfriend Asia Argento against (we’re not making this up) charges of witchcraft. “Who among us has not cuddled up with our laptop on a Sunday evening to blog about the witchcraft and demonry that covertly seek to corrupt our world?” Paul ironically asks.

Imposing Catholic dogma on hospitals
Of course, the Catholic Church has been a prime culprit in spreading misinformation about witchcraft and demonry, but another front on which it has caused real harm is in its imposition of church dogma on the hospitals it owns around the country (almost one-fifth of the total). Journalist Abby Scher joined Dan, Annie Laurie and me on our radio show this week to discuss a Progressive magazine article she wrote about the issue. We also chatted with FFRF Program Assistant Kristina Daleiden about our national voter registration drive. 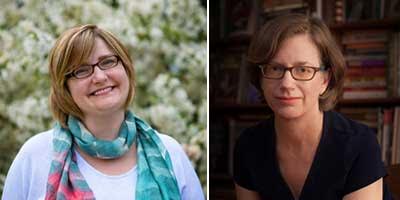 No preaching at football camps
Along with the Fourth of July, another summer tradition we love in America are football camps — but not when they’re used as an excuse to proselytize. So when that happened at two public school football camps last month in Arkansas, we vociferously objected. “Public school students should not have to pray to play,” Annie Laurie said.

And no tax giveaways to churches, either
And we protested a government giveaway of $10,000 to a Virginia church to repair stained-glass windows. “People of different faiths or no faith can suggest ten thousand better ways this taxpayer money can be put to use,” said Annie Laurie. 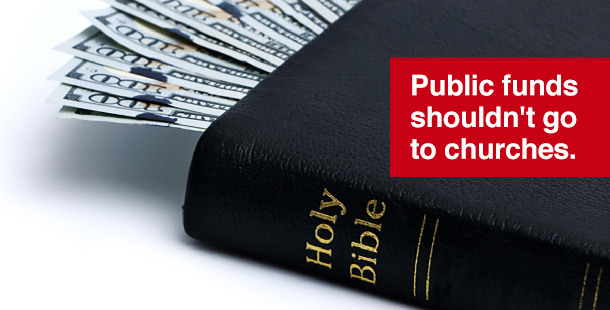 “A high school principal in central Kansas has agreed to stop telling graduates that faith and Jesus will lead them to success,” the Wichita Eagle reported about an official reaction to a letter FFRF Legal Fellow Chris Line wrote in May. “A letter from the Great Bend school district to the Freedom From Religion Foundation said that Principal Tim Friess’ comments at the May 20 graduation violated the district’s policies.”

An Illinois elementary school principal also agreed to mend her errant preaching ways in response to a letter FFRF Staff Attorney Ryan Jayne wrote her. We were happy to offer her First Amendment lessons.

The NY Times and a media watchdog group like us
We were delighted that we are mentioned in a New York Times op-ed by Susan Jacoby, an FFRF honorary director, due to our multipronged opposition to Attorney General Jeff Sessions’ theocratic policies.

And we were super-pleased when a media watchdog group awarded us the rating of “least biased.”

“These sources have minimal bias and use very few loaded words (wording that attempts to influence an audience by using appeal to emotion or stereotypes),” the group explained its rating. “The reporting is factual and usually sourced.  These are the most credible media sources.”

We’re glad to be of public service this Independence Day. And we’re able to do all of this, dear member and supporter, only because of you and your support of FFRF. A Happy Fourth weekend!