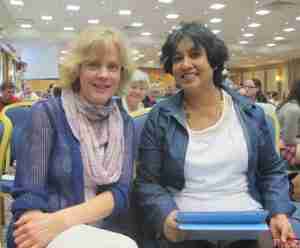 I had a bad case of déjà vu Monday, my first day back at work after a week in the Republic of Ireland, when I learned that abortion clinics in our state had been shut down as of that morning. We’d spent a lot of time learning about Ireland’s draconian abortion ban. While we were away, Wisconsin’s aggressively reactionary governor had signed an antiabortion bill Friday requiring that abortion physicians must have admitting privileges at a hospital within 30 miles of a clinic. This effectively shut down two of Wisconsin’s four abortion clinics.

Visiting Ireland was like stepping back in time, in good ways in terms of the agrarian landscape and culture, but also back to the bad old days when abortion was illegal. Now the clock was being turned back in Wisconsin?

My mother, who, at 86, remains volunteer administrator of the Women’s Medical Fund charity helping to pay for abortion care, had patients with upcoming appointments at the shuttered Milwaukee clinic. We talked of directing them to a Chicago clinic, but knew for these indigent women this would be yet another hurdle, possibly insuperable.

National Planned Parenthood and Milwaukee’s Affiliated Medical Services had filed a challenge as soon as the law was signed July 5. A federal judge whose bio described him as from a large Irish Catholic family, had set the hearing date for an injunction for July 15. We were all in shock. Nora Cusack, a Women’s Medical Fund volunteer who stopped by the office yesterday morning, noted that even in Alabama, a judge had immediately issued a temporary restraining order against a similar law there.

Fortunately, by noon Monday the judge announced an emergency teleconference that afternoon to entertain a motion for a temporary restraining order. Shortly after 7 p.m. yesterday, the judge issued a strong 19-page ruling  granting the injunction, noting “there is a troubling lack of justification for the hospital-admitting privileges requirement.”

Dan and I had just attended Atheist Ireland’s Empowering Women through Secularism Conference June 29-30 in Dublin, where the Irish ban on abortion was front, left and center of secular and feminist concerns.

Just last week the Irish Parliament preliminarily voted in favor of the Protection of Life During Pregnancy Bill, referring to . . . controversially . . . saving the pregnant woman’s life. We flew back Saturday so missed the huge antiabortion demonstration in Dublin attracting some 35,000 faith-heads who think it’s OK if women die unnecessarily during pregnancy. (View footage taken by Atheist Ireland — the impressively loud “Shame on you” chanting was by some 1,000 counterpicketing pro-choice activists.)

Jane Donnelly, one of our kind Irish hosts who shared this footage with me, emailed: “We made a lot of noise. All the film we have is of the antiabortion marchers and it was the first time that these people had anyone directly challenge them on the streets. Some of them look a bit taken aback as they have simply never been challenged before in this manner. We were putting the shame on them for letting women die and for carrying those horrible posters. The march was organised by Youth Defence. Most of their funding comes from the U.S.”

The bill is the weakest possible response to the shocking and brutal death late last October of Savita Halappanavar, a dentist from India 17 weeks into a wanted pregnancy that went wrong. Savita had the misfortune to be living in Galway, Ireland, when it was discovered she was starting to miscarry.

Under Amendment 8 of the Irish Constitution passed in 1983, fetal life is put on par with (read: above) the woman’s right to life. The Galway hospital refused to abort her pregnancy until there was no detectable fetal heartbeat, even though her uterus was rupturing. Savita and her husband pleaded to end her doomed pregnancy. Blood poisoning had set in by the time the hospital intervened.

In 1992, in the landmark Irish “X” case, a 14-year-old girl who was pregnant from rape was barred by the government from traveling to the U.K. to have a legal abortion. She had threatened to kill herself if not permitted to end the pregnancy. A 4-1 ruling by the Irish Supreme Court was issued allowing her to travel to Britain for an abortion, establishing the right to abortion in Ireland if the pregnant woman’s life is at risk because of pregnancy, including the risk of suicide. “X” ended up miscarrying in an English hospital. (And just last week outrageous news surfaced that a pregnant 11-year-old girl — a fifth grader — raped over the course of two years in Chile by her mother’s partner, is being denied an abortion. This arch-conservative, arch-Catholic country admits no exception of its abortion ban.)

Contraception was only legalized in Ireland in 1985 — over the vociferous campaigning of the Catholic Church. Irish women have been in reproductive hell, thanks to Catholic doctrine. Today 4,000-5,000 Irish women routinely fly over to Britain or elsewhere — if they have the funds and connections. After the conference, Dan and I, along with Taslima Nasrin, other feminists and Atheist Ireland directors attended a standup comedy fundraiser for an organization that collects funds to aid women traveling for that very purpose. For now, the abortion rights campaign is focusing on saving the lives of women like Savita.

I had geared my opening remarks at the conference to the circumstances in Wisconsin in the early 1970s somewhat analogous to Ireland’s ban. Witnessing the role of religion, particularly that of the Catholic Church, in legislating its dogma into our civil law, was instrumental for my mother and me in deciding to found the Freedom From Religion Foundation. I recalled the unforgettable time in 1971 when the Roman Catholic district attorney in Dane County, here in Madison, Wis., illegally raided Wisconsin’s first lawfully open abortion clinic. The sheriffs forced their way into the clinic, absconding with the records of 300 pending appointments — as well as taking into custody the 17-year-old patient whose feet were in stirrups when they burst into an examining room. At 15, I was part of the huge distressed crowd that swelled into our City-County Building to protest this tyrannical act more akin to a police state than a democratic republic. I carried a placard asking, “Does the Pope Rule Wisconsin?”

My mother was called in by clinic employees to help during the crisis. Crying women were arriving at the closed clinic after driving all night with nowhere to go. It was chaos. My mother learned a few weeks later from a social worker that a desperate rural 17-year-old who’d had an appointment self-aborted with a coathanger and died. My mother collected funds to help some of these women fly to New York state, where abortion was legal. Eventually this travel fund became the Women’s Medical Fund, an all-volunteer charity that has since helped more than 20,000 girls and women without means exercise their right to choose abortion. (Contribute to this pure charity, which is tax-exempt, by sending your check to: Women’s Medical Fund, P.O. Box 248, Madison WI 53701.)

Assaults at the state level on abortion rights continue, with 43 restrictions adopted this year to date, according to the Guttmacher Institute. The U.S. House of Representatives passed a ban on abortion after 20 weeks (the few abortions at this point are limited to extreme cases). Yes, it should die in the Senate and would be vetoed in any case by Obama, but what a commentary that the House could command such a vote. Challenges are ongoing of bans at six and 12 weeks in North Dakota and Arkansas, respectively. Texas, despite Rep. Wendy Davis’ heroic filibustering, is hell-bent on passing its own version of Wisconsin’s law that would shut down nearly every clinic in that state. It’s chilling to see the anti-choice camp now turn its sights on contraception. More than 50 lawsuits have been filed by the Catholic Church and fundamentalist groups challenging Obama’s contraceptive mandate.

Monday’s scare here in Wisconsin is a wake-up call showing how close we are to losing reproductive rights in the United States under the relentless campaigning of the religious lobbies and their “tea party” advocates.

Click here to watch the speeches and panels at the Empowering Women through Secularism.

Annie Laurie Gaylor is co-president of the Freedom From Religion Foundation. She co-founded FFRF in 1976 as a college student with her mother Anne Nicol Gaylor. She served as the editor of FFRF’s newspaper, Freethought Today, from 1985-2009. She became FFRF co-president with Dan Barker in 2004. Annie Laurie has authored three books for FFRF: Woe to Women: The Bible Tells Me So; Woe to Women: The Bible Tells Me So; and Women Without Superstition: “No Gods – No Masters”, the first anthology of women freethinkers.
All Articles by this author
PrevPreviousThe Arrogance of Christian Nationalism
NextNothing Fails Like Government PrayerNext