The Passover story is immoral and bizarre. An omnipotent being kills all the first born, including innocent children, of an entire country. And in order to be spared, this god’s followers must give his angel of death directions written in lamb’s blood. The celebration itself is meant to thank this god for not killing the chosen few—for passing their houses over.

Whenever I’ve pointed out the immorality of slaughtering innocent people, believers are disturbingly quick to defend their god, “It is ok for my god to kill innocent children on Passover because…”

There’s no end to that sentence that can truly make the murder of innocent children moral, but people inevitably defend it. When Christopher Hitchens said that “religion poisons everything” he was saying that “it infects us in our most basic integrity.” Here’s the incomparable Hitch on this point:

So when I say, as the subtitle of my book, that I think religion poisons everything, I’m not just doing what publishers like and coming up with a provocative subtitle, I mean to say it infects us in our most basic integrity. It says we can’t be moral without Big Brother, without a totalitarian permission. It means we can’t be good to one another, it means we can’t think without this. We must be afraid, we must also be forced to love someone who we fear, the essence of sado-masochism and the essence of abjection, the essence of the master-slave relationship and that knows that death is coming and can’t wait to bring it on. I say this is evil. And though I do, some nights, stay at home, I enjoy more the nights when I go out and fight against this ultimate wickedness and ultimate stupidity.

And regular, decent people’s defense of the Passover murders is a perfect example of this poisonous influence. There is no excuse for an all-powerful being to murder innocent children. And no decent person would make an excuse, but for his religion. Here’s how a few people—normal, everyday, basically good people—defended the slaughter against my criticism: 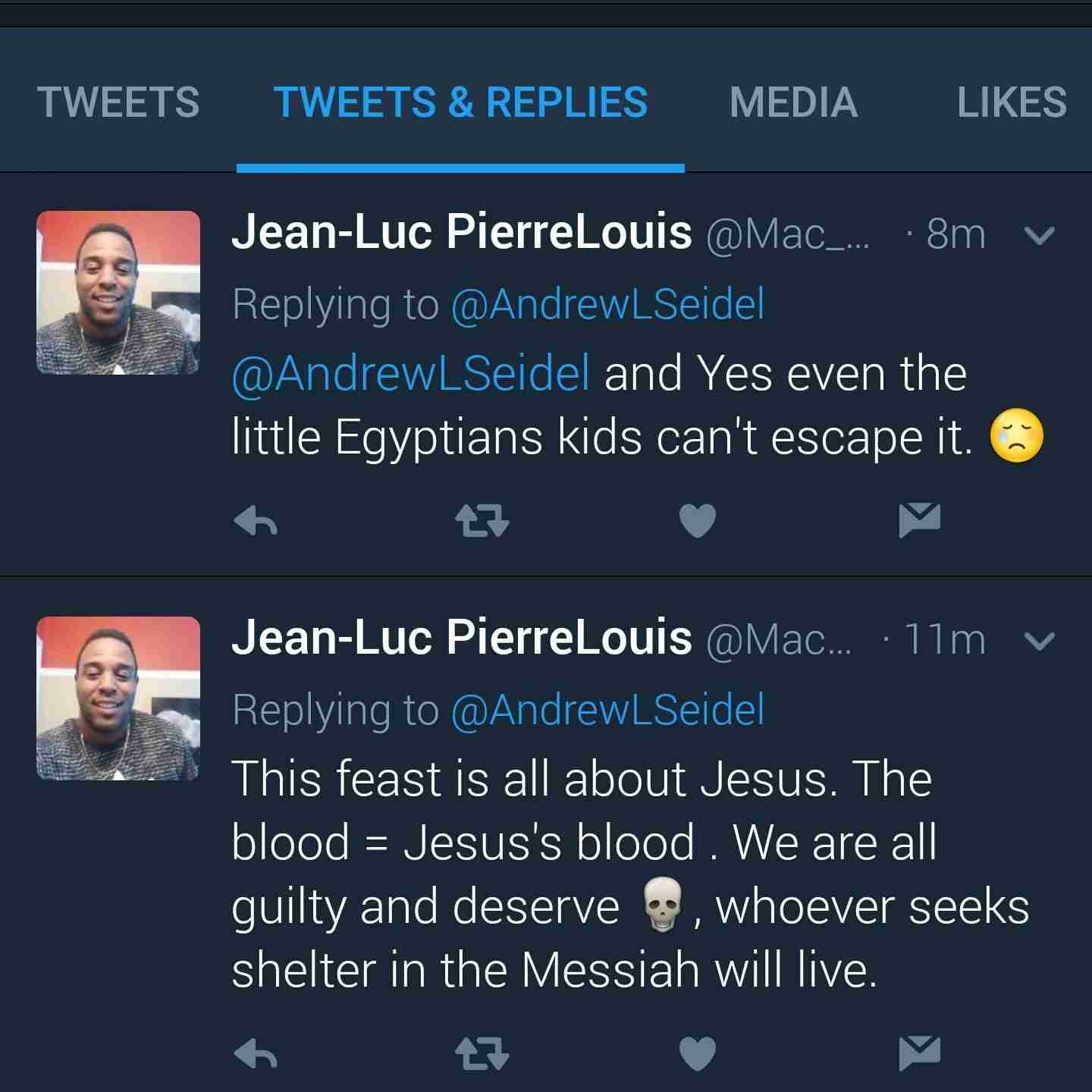 “This feast is all about Jesus. The blood = Jesus’s blood. We are all guilty and deserve [death], whoever seeks shelter in the Messiah will live. And yes even the little Egyptians [sic] kids can’t escape it.”

This is the true, often unspoken harm of religion—what Hitchens meant. Religion has poisoned their basic humanity—their empathy—so completely that they will defend and attempt to justify the murder of children, even to the point of labeling those children guilty of a capital crime.
And here’s the thing: These are probably good people. They’re likely loving fathers and sons. They’re probably kind individuals; it is these religious ideas that are infecting their empathy.
I don’t wish to pick on these folks, so I’ll punch above my intellectual weight. The Christian apologist William Lane Craig is an infamous defender of genocide, so long as his god did the killing or it was done in the name of his god.

That is beyond disturbing. If you disagree, substitute the name of your least favorite dictator (Stalin, Pol Pot, Genghis Khan, Hitler, Mao) for “God” in the above passage and reread it.

Again, I’d bet that Craig is a nice guy who wouldn’t defend any other genocide, slaughter, or taking of innocent life. There is simply no better illustration of the way that religion corrupts our morality and our shared humanity. Hitchens, whose birthday is tomorrow, April 13, was right: Religion poisons everything.

Andrew L. Seidel is a constitutional attorney and the Director of Strategic Response at the Freedom From Religion Foundation. His first book The Founding Myth: Why Christian Nationalism Is Un-American was burned by a Tennessee preacher. His second book, American Crusade: How the Supreme Court is Weaponizing Religious Freedom, is due out in 2022. He's won numerous academic awards and holds two law degrees: a J.D. magna cum laude from Tulane University Law School and an L.L.M. from Denver University’s Sturm College of Law. Andrew has a B.S. in neuroscience and environmental studies from Tulane. Before dedicating his life and law degree to keeping state and church separate, Andrew was a Grand Canyon tour guide and an accomplished nature photographer. Andrew has appeared on Fox News to debate Bill O’Reilly, MSNBC, and hundreds of other media outlets speaking on behalf of FFRF.
All Articles by this author
PrevPreviousGideons, prayers and tweets — oh my!
NextRon Reagan’s FFRF TV ad evokes wildly different reactionsNext