PrevPreviousNewsweek’s Christianity in Crisis and Andrew Sullivan’s Crisis of Faith
NextJust in Time for Father’s Day: ‘My Real Dad’ by JesusNext 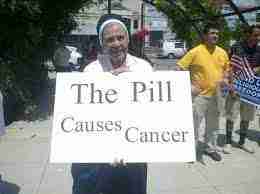 Did you know “contraception kills”?

That’s what an intrepid coterie of FFRF’ers was told by true believers when we counterpicketed a June 8 rally conducted by the Roman Catholic Church at the federal courthouse here in Madison, Wis.

I held a sign, “Quit the Church,” accompanied by about 20 other FFRF members, staffers, interns and volunteers. It was chilling to hear a young male speaker intone, “God is on our side.” At one surreal point during the rally, which featured at least six prayers, a priest instructed all of the present faithful to turn away from the podium and face us counter-protesters. As they prayed aggressively at us we had fun chanting my mother’s mantra: “Nothing Fails Like Prayer.”

Midway through the rally, a glassy-eyed man with an infant came up to me, held up the baby, and solemnly told me: “Contraception would have killed her.” Others had signs saying, “Contraception kills.” Justin Vacula, one of our Pennsylvania members, alerted by FFRF to the counterpicketing opportunity, took a photograph of a nun in Scranton, Pa., bearing a ridiculous permutation of the “contraception kills” slogan: “Contraception causes cancer.” (Justin also photographed a banner carried in Scranton saying: “God’s law comes first. Repeal socialist Obamacare!”)

The Madison demonstration was one of about 100 conspicuously tiny rallies orchestrated by the U.S. Catholic Conference of Bishops at federal courthouses around the country. The object was to decry the contraceptive health care mandate, under the phony guise that it threatens the religious liberty of Catholics. The date, June 8, was chosen as the anniversary of the introduction of the Bill of Rights by James Madison. Talk about irony! The Roman Catholic hierarchy is determined to deny reproductive liberty to as many American workers as it can, in the name of “religious liberty.”

We realized early on during the rally that we were up against real fanatics. Men whipped out their rosaries as they launched into obsessive-compulsive prayer. Dan was told by a man razzing him that he was a socialist and “nonperson.” (Zygotes are persons, but atheists are non-persons?) Dan got even by calling out “You are talking to yourself” when a priest called for silence before yet another prayer. All but two of the speakers were men, including priests. A nun concluded the rally. We found it fascinating that a particularly aggressive local evangelical woman who runs the local Focus on the Family offshoot was given star billing. It is chilling to see an alliance between Roman Catholics and fundamentalist Protestants. Since when did evangelicals oppose contraception? The times are a-changing and many evangelicals now do, no longer recognizing a distinction between abortion and contraception.

But the Catholics present were clearly the outliers, the non-mainstream Catholics from renegade parishes. How do I know? They passed out an angry “Open Letter to Bishop Robert Morlino” urging him to ensure Wisconsin joins the “national lawsuits to stop Obama’s HHS Abortion [sic] Mandate.” This petition wasn’t directed at our governor or attorney general. No, the person they’re mad at is their own (arch-conservative) bishop!

Actress/playwright Julia Sweeney has so wonderfully recorded a TV ad for FFRF to counter the bishops’ campaign. She told me she thinks the bishops are overplaying their hand. Today’s typical Catholics are not going to go to war against contraception — they’re too busy using it! Unfortunately, all too many of these “bad” Catholics continue to support their antiwoman, anticontraceptive, antediluvian church, and that is why FFRF will continue its “It’s time to quit the Roman Catholic Church” campaign. It’s been fun watching the fireworks from our full-page ads. But we’re up against the Church’s avowed multimillion dollar anticontraceptive mandate blitz this month. FFRF will have billboards going up in some of the dioceses suing HHS to try to halt the contraceptive mandate. Next goal: Put Julia’s sweet, sane words on Comedy Central!

Thanks to all FFRF members who counter-picketed on June 8, and to all who are helping us counter the Catholic Bishops!

All Articles by this author
PrevPreviousNewsweek’s Christianity in Crisis and Andrew Sullivan’s Crisis of Faith
NextJust in Time for Father’s Day: ‘My Real Dad’ by JesusNext