Skip to content
PrevPreviousKeeping an eye on biker preachers, the Ohio guv, preachy teachers — and Dan Barker
NextNational Day of Prayer, Trump’s chief of staff, the Ark Encounter and other challengesNext 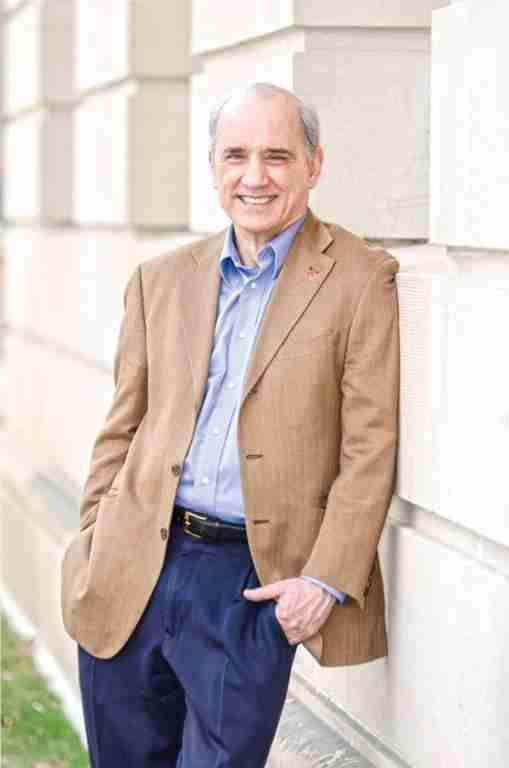 The big news this week: A major case that we’ve been fighting to open up our nation’s legislative chambers to atheists and freethinkers was decided just today against us. The U.S. House chaplain can continue barring atheists from delivering invocations, the U.S. Court of Appeals for the District of Columbia unfortunately ruled. The decision was limited, but very disappointing.

“I am deeply dismayed that atheists and other nonbelievers are being openly treated as second-class citizens,” said Dan Barker, plaintiff and co-president of the Freedom From Religion Foundation. “Our government is not a theocracy, and it needs to stop acting like one.”

The decision is a wake-up call for us nonbelievers and FFRF to double down on our efforts to educate Congress, the media or the public on why it should be unacceptable to treat atheists like pariahs.

They’re suing us?!
Another legal move that caused us to do a double-take was the decision of Morris County in New Jersey to file a frivolous lawsuit against FFRF after losing to us all the way to the U.S. Supreme Court level. The New Jersey Supreme Court unanimously agreed last April that Morris County violated the New Jersey Constitution by granting millions of tax dollars to repair houses of worship. The U.S. Supreme Court just last month unanimously agreed not to hear the county’s appeal of the case. And now the county has the audacity to sue us because we’re seeking the attorneys’ fees owed to FFRF! We’ll certainly fight this “harebrained Hail Mary.”

FFRF Staff Attorney Ryan Jayne explains the weirdness of it all in our “Newsbite” segment. 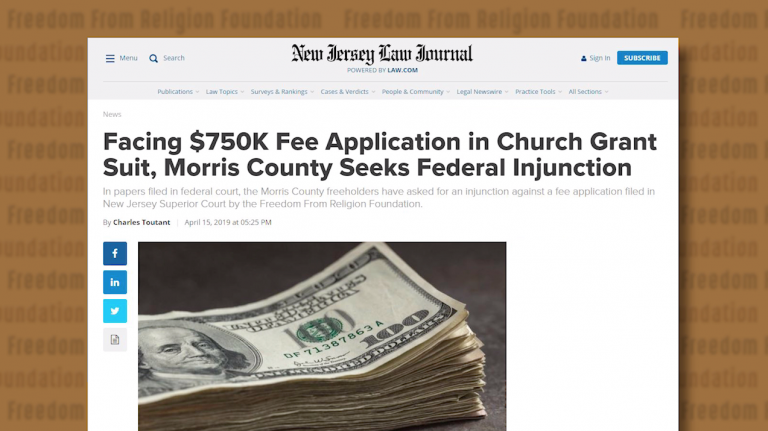 Stop disparaging nonbelievers, Justice Thomas!
Another instance that should or shouldn’t be surprising elicited a response from us. When Supreme Court Justice Clarence Thomas recently denigrated atheists, FFRF Director of Strategic Response Andrew Seidel fired back.

“This is not a savvy constitutional thought, but bigotry against the nonreligious,” Andrew wrote in a column for Rewire News. “It’s religious bigotry in an answer decrying religious bigotry.”

More pleasant surprises, too
We had a number of more pleasant surprises, too. A Pennsylvania school district removed a godly broadcast tagged on to the Pledge of Allegiance at a local elementary school after we advised it to do so. And after many twists and turns, a Missouri town finally followed through on relocating a cross that we had convinced it to transfer from public land, which these days constitutes a major victory … just in time for Easter!

“We’re so pleased that Ozark officials ultimately did the right thing,” Annie Laurie said. “We are not a Christian nation, Ozark is not a Christian town, and moving the cross to private property demonstrates that the town is welcoming to all its citizens.”

Give the guy his license plate!
We didn’t let the surprises distract us from our more regular work. Along with the American Civil Liberties Union of Kentucky, we filed for summary judgment (asking for a quick decision) in a federal lawsuit over an atheist being denied an irreverent license plate in Kentucky. We had sued the Kentucky transportation secretary in November 2016 on behalf of a Kentucky citizen, Bennie Hart, who was refused a personalized license plate reading “IM GOD.” C’mon, Kentucky officials, you won’t burn in hell if you grant this gentleman his license plate. 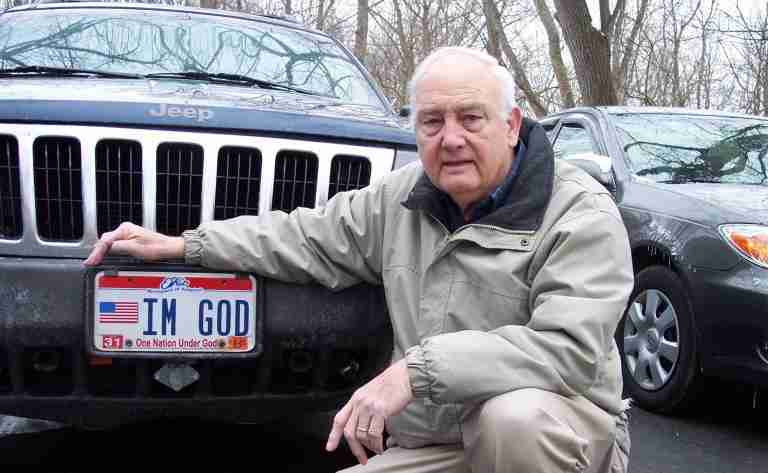 Dan’s travels continue
Dan Barker, who just came back to the office today from speeches in Iowa and Minnesota, is busily on the road in the coming week, too. On Tuesday, April 23, he will be speaking before the Pittsburgh Freethought Community about his new book, Mere Morality. Then he heads back to home base to debate the biblical God with a pastor in Wausau here in Wisconsin on Thursday, April 25. Catch him in person if you’re anywhere nearby. Dan has done more than two dozen appearances in roughly a dozen states over the last three months.

Annie Laurie chatted on our radio show this week long distance with Dan about his travels and with Andrew about Morris County’s bizarre legal maneuver. She then interviewed Steve Benson, who was the Arizona Republic’s Pulitzer Prize-winning editorial cartoonist for 38 years and who now draws cartoons for FFRF, about how he went from a “latter-day saint to latter day ain’t” and about the irreverent work he’s doing for us. 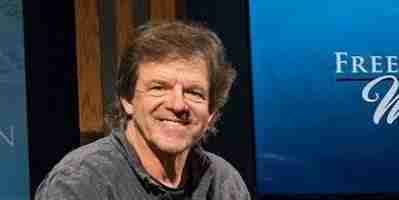 Two very different commemorations
On our visual offerings, we’ve had fun this week in observance of two diametrically opposite commemorations. To commemorate International Ask an Atheist Day, we did a free-for-all Q&A on our Facebook Live “Ask an Atheist” feature with Ryan Jayne and FFRF Legal Fellow Colin McNamara, joined on Skype by Nick Little from the Center For Inquiry, Sarah Henry from the American Humanist Association and Debbie Allen from the Secular Coalition of America.

And for Easter weekend, on our “Freethought Matters” show on Easter Sunday (listings for broadcasts in 11 major cities here) Annie Laurie and Dan gleefully demolish the Ten Commandments, interspersed with clips from Cecile DeMille’s over-the-top epic. (You can catch the show online on our YouTube channel.) 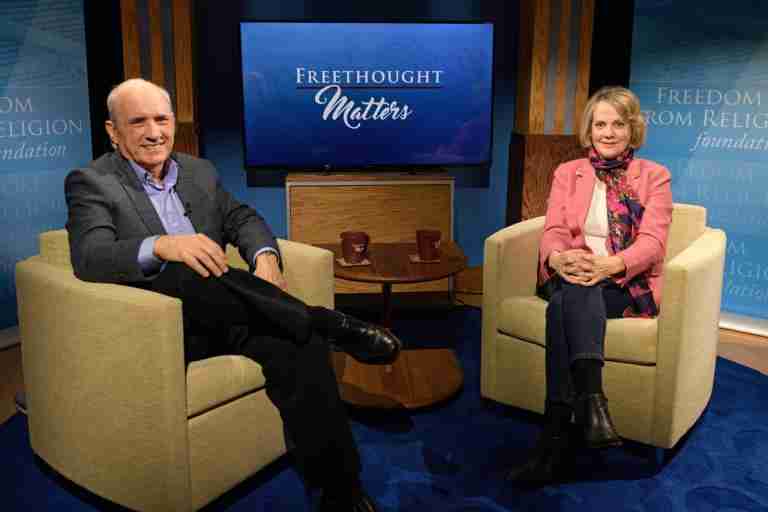 Extreme surprises, no surprises and everything in between — we know how to face these all only due to your continuing support and backing, needed now more than ever.

All Articles by this author
PrevPreviousKeeping an eye on biker preachers, the Ohio guv, preachy teachers — and Dan Barker
NextNational Day of Prayer, Trump’s chief of staff, the Ark Encounter and other challengesNext