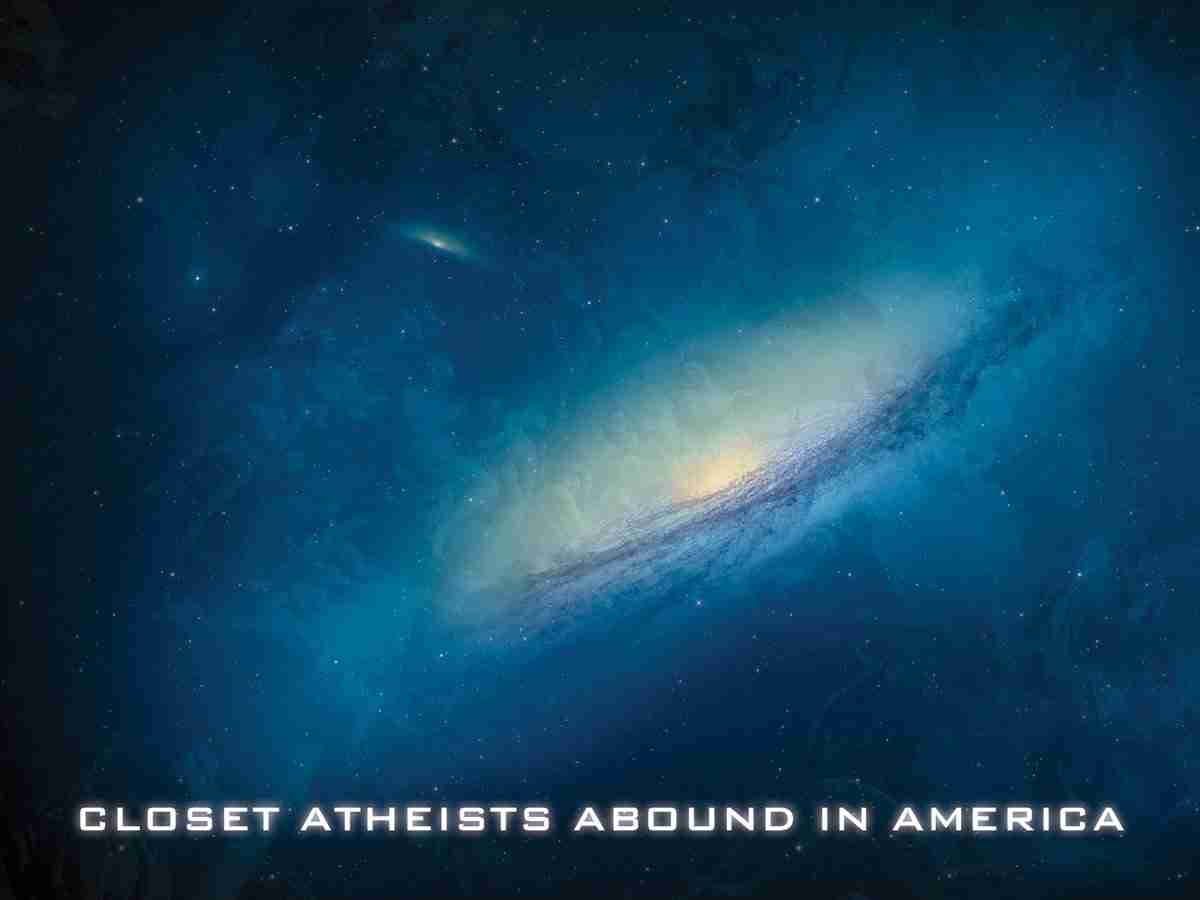 Atheists are disliked in America — constantly denigrated in public surveys — which may explain why many doubters conceal their lack of belief.

However, a 2017 poll by University of Kentucky researchers found that perhaps one-fourth of Americans are either overt skeptics or “closet atheists”: a far higher ratio than previously thought. Here’s the background:

Two-thirds of Americans say they have negative opinions about disbelievers. More than one-third think atheists shouldn’t be allowed to teach in public schools, or hold office, or even hold rallies (talk about taking away the Constitutional right to peacefully assemble!). Revealing doubt about the supernatural can cause a storm within a family, and maybe jeopardize one’s career. Therefore, atheism is hidden by some.

“A 2016 Public Religion Research Institute (PRRI) survey found that more than one-third of atheists reported hiding their religious identity or beliefs from friends or family members out of concerns that they would disapprove,” wrote Dr. Daniel Cox, Research Director of the PRRI. Dr. Cox added:

“There are Catholics, Jews, and Muslims who do not believe in God; their connection to religion is largely cultural or based on their ethnic background.”

Polls that ask directly about belief in God usually find that under 10 percent are bold enough to declare themselves atheists. However, two U.K. scholars, Will Gervais and Maxine Najle devised an indirect survey method called “the unmatched count technique.” It asks bland general questions of two control groups, and asks participants in one group if they agree with the statement: “I believe in God.” Authors say it reveals a lot of clandestine nonbelievers.

Results, published in the Social Psychological and Personality Science journal, estimate that 26 percent of American adults actually are atheists.

“There’s a lot of atheists in the closet,” researcher Gervais told Vox. Their report says:

“Obtaining accurate atheist prevalence estimates may help promote trust and tolerance of atheists — potentially 80 million people in the USA and well over a billion worldwide.”

Frankly, I suspect that the rate of American doubters is higher still. Most churchgoers don’t really believe the supernatural dogmas they sing about. Remember the old joke saying that no Christian wants to go to heaven “right now.”

Also, ideas about God are blurry. Some believe in a miracle worker who answers prayers, while others have much-vaguer notions. PRRI Director Dr. Cox wrote: “Does a belief in mystical energy, for example, constitute a belief in a god?”

When Gallup recently asked a yes-or-no question about belief in a god, 89 percent of Americans reported that they do believe. Yet, in a separate poll, only slightly more than half (53 percent) of Americans said they have an anthropomorphic god in mind, while for other believers, it’s something far more abstract.

Some sophisticated theologians try to shift religion away from supernatural spirits. They contend that “God” actually is the human capacity to feel compassion and empathy — that “God is love.” Or, they postulate that God is the awesome, mysterious power in every atom of the universe.

But these approaches don’t fit the parent-creator deity of most churches. I don’t see how churchgoers could worship part of their own psychology (or pray to E=MC2). That would turn religion into something quite different.

Actually, those who would reinterpret God in a manner far removed from traditional religion are almost “closet atheists” of another sort.

As America relentlessly turns more secular, I think the stigma against skeptics will fade, and many more may come out of the closet.

This column is adapted from a piece that originally appeared on July 19, 2021, at Daylight Atheism.

James A. Haught, syndicated by PeaceVoice, was the longtime editor at the Charleston Gazette and has been the editor emeritus since 2015. He has won two dozen national newswriting awards and is author of 12 books and 150 magazine essays. He also is a senior editor of Free Inquiry magazine and was writer-in-residence for the United Coalition of Reason.
All Articles by this author
PrevPreviousWe need herd immunity — not herd mentality
NextDraconian abortion ban in Texas endangers women’s livesNext