It seems that some churches want to have it both ways.

State-church separation gives churches significant benefits, and even preferential treatment, such as exclusion from taxation. Attached to these benefits are requirements — most importantly that taxpayers will not be forced to fund houses of worship. But now some churches are seeking to claim these benefits, while shunning the obligations — and they are relying on a recent Supreme Court decision (Trinity Lutheran) to do so.

A group of churches has sued the Federal Emergency Management Agency because federal law correctly bars the agency from disbursing disaster recovery funds to houses of worship.

When the president declares a disaster, FEMA can use federal taxpayer money to help private nonprofit facilities repair and rebuild. “Facilities established or primarily used for political, athletic, religious, recreational, vocational, or academic training, conferences, or similar activities are not eligible” for these funds (emphasis added).

So perhaps it’s not a simple case of “discrimination against houses of worship,” as the churches claim in their lawsuit. Proving discrimination means showing that other, similarly situated organizations receive preferential treatment, a harder argument to make given how many nonprofits are excluded here. Let’s ignore this fact for the moment. The churches’ main argument is that the Supreme Court’s recent decision in Trinity Lutheran guarantees them access to these federal funds because of their right to freely exercise their religion.

This turns the true religious freedom interest in the case on its head. The primary and longstanding right that is at issue is of individuals not to be coerced into supporting a house of worship (read more about this point here). It’s a right that dates back to the country’s founding. Trinity Lutheran did not examine that right. 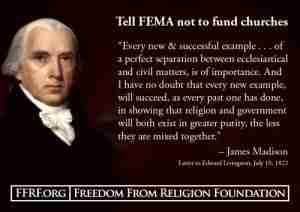 Trinity Lutheran was a terrible decision. It was terribly reasoned if you are an originalist, which many of the justices in the majority claim to be. It is terrible precedent if you care about religious freedom or state-church separation. And it was jurisprudentially deficient because there was no adversity between the parties— belatedly the parties agreed on what the outcome of the case should be, so the court had no dispute to settle.

Trinity Lutheran is a church in Missouri. It owns a school and a playground is attached to that school. A state program funds the resurfacing of playgrounds, from pea gravel to a rubberized surface. The state constitution contains a provision preventing taxpayer money from flowing to churches and religion. This provision was adopted because the government should not employ its coercive taxing power to compel support for religious institutions. The law was well-settled, and state-church separation interests should have dictated the outcome. Unfortunately, because the parties agreed that there was no state-church separation interest in the case, the Supreme Court only examined the church’s religious freedom argument.

The court turned centuries of American law and America’s governing principles on end. “The exclusion of Trinity Lutheran from a public benefit for which it is otherwise qualified, solely because it is a church, is odious to our Constitution all the same, and cannot stand,” its decision reads. And so, reasoned the Harvey-stricken Houston churches, they should have access to federal funds to rebuild their houses of worship. They should not. In fact, even under Trinity Lutheran, they should not.

The differences in the case are deep, even if not immediately apparent.

First and perhaps most important, Trinity Lutheran involved a playground, not rebuilding a church. As the dissent and FFRF have pointed out, that playground was part of the church’s ministry, but, and this is critical, the majority ignored that fact. That’s infuriating, but it also serves to limit the precedential value of the opinion. While the playground was part of the church’s ministry, that is not reflected in the Trinity Lutheran decision. As far as the Supreme Court is concerned, the taxpayer funds in Trinity Lutheran went toward a structure that was never used for religious purposes.

Second, there is a significant legal difference between a church and a church-run playground. The secular function of rubberizing a playground surface is fairly obvious: to prevent children from skinning their knees. At least some of the justices on the Supreme Court seemed to think it distinguishable from the religious mission of the church itself. But there is no way to divorce FEMA funds being used to rebuild the house of worship itself from the worship going on in that structure. If churches get access to these funds, it is quintessentially government-funded religion.

It ought to be obvious to everyone, including these churches, that the government should not simply give out money to build a new church or mosque or Mormon temple or whatever it is that Scientologists meet in. Almost everyone would agree that this violates the Constitution. The law does not change because a tragedy such a hurricane, tornado, earthquake, or other “act of God” has laid a church low.

Finally, Trinity Lutheran did not consider the Establishment Clause of the First Amendment. How could seven judges ignore an entire provision of the First Amendment? Because “The parties agree that the Establishment Clause of that Amendment” didn’t apply. That’s it. Seven judges threw out a portion of the Constitution because the parties said it was OK to ignore it. Justices Sonia Sotomayor and Ruth Bader Ginsberg were appropriately incensed at this judicial miscarriage: “Constitutional questions are decided by this Court, not the parties’ concessions.”

But this gaping failure in Trinity Lutheran may be the savior for the wall of separation in the FEMA funding case. That is because the FEMA funding ban is in place because of the Establishment Clause, which the Supreme Court ignored. It will simply not be possible to ignore it in this case.

But FFRF is still worried. We are deeply troubled by this lawsuit. And not just because the president, who is nominally in charge of defending this FEMA ban, has tweeted that he does not support it. We are troubled because the Department of Justice will represent FEMA. The Justice Department is run by Attorney General Jeff Sessions, who has called the constitutional principle of a wall of separation between state and church a “recent thing that is unhistorical and unconstitutional.” In his confirmation hearing, he infamously denigrated secular Americans.

He will be in charge of defending the wall of separation he believes to be unconstitutional. And that, dear friends, is why FFRF needs your support more than ever. Please join us today and help us fight these critical battles.

Andrew L. Seidel is a constitutional attorney and the Director of Strategic Response at the Freedom From Religion Foundation. His first book The Founding Myth: Why Christian Nationalism Is Un-American was burned by a Tennessee preacher. His second book, American Crusade: How the Supreme Court is Weaponizing Religious Freedom, is due out in 2022. He's won numerous academic awards and holds two law degrees: a J.D. magna cum laude from Tulane University Law School and an L.L.M. from Denver University’s Sturm College of Law. Andrew has a B.S. in neuroscience and environmental studies from Tulane. Before dedicating his life and law degree to keeping state and church separate, Andrew was a Grand Canyon tour guide and an accomplished nature photographer. Andrew has appeared on Fox News to debate Bill O’Reilly, MSNBC, and hundreds of other media outlets speaking on behalf of FFRF.
All Articles by this author
PrevPreviousSNAP founder Barbara Blaine’s death a great loss
NextSaudi women can now steer their country into the EnlightenmentNext