Skip to content
PrevPreviousNo More # thoughts and prayers
NextLesson of Florida’s hypocritical vote: Put ‘God’ back in that closet, fast!Next

The Christian Right must be incapable of shame.

The Christian Right must be incapable of shame.

Otherwise, you’d think that the 80 percent of white evangelicals who voted for Donald Trump in the 2016 U.S. presidential election might be a tad embarrassed over how blatantly the Russian election interference was targeting them.

One social media ad linked to the Russian manipulation could be a parody. A hideous, horned Satan is telling a very white Jesus: “If I win Clinton wins!” Jesus responds: “Not if I can help it!” 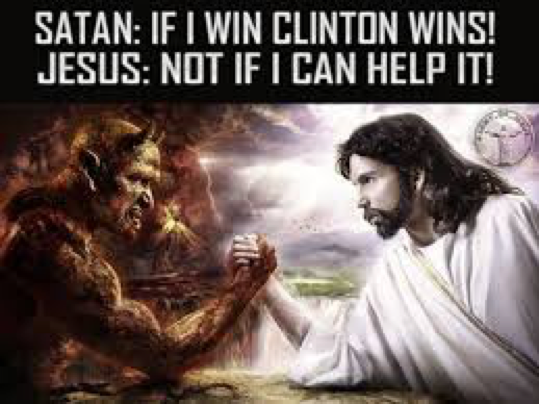 This image was first released at a November Senate Intelligence Committee hearing. A Daily Beast headline observed then: “Russian trolls didn’t need millions to sow chaos. They had Jesus.” The article noted another meme by the “Army of Jesus” that states: “Trust. Vote. Pray. How should Christians vote?” 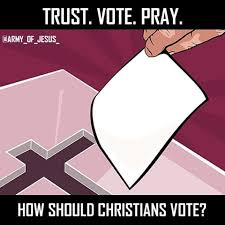 Even blunter is this variation on the Hillary as Satan theme: 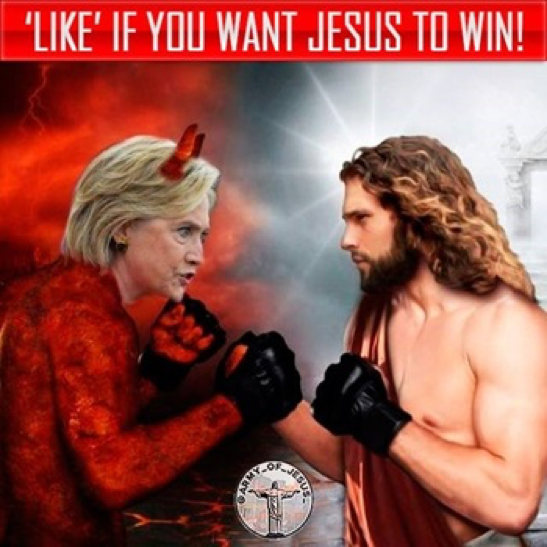 Daily Beast wrote, “Many of the memes and images are what you might find in a normal, online religious community.”

The “Army of Jesus” Facebook account pressed bigoted, anti-atheist buttons with the illustration below, depicting a 1940s-era girl-child hugging the grisly depiction of a crucified Jesus. Once floated by the Russians, it was liked and shared — no advertising outlay required. Its “Stop atheist propaganda” message is a bit chilling: 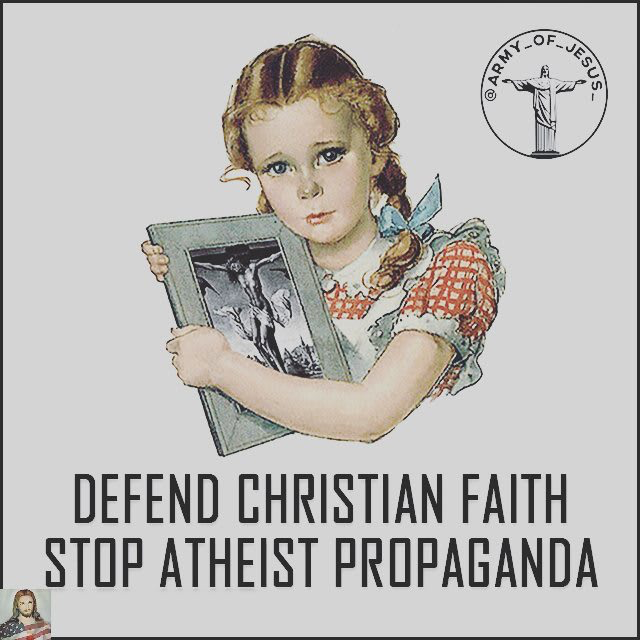 Here’s another sample of the freely posted graphics and memes by the “The Army of Jesus,” compliments of the Russians: 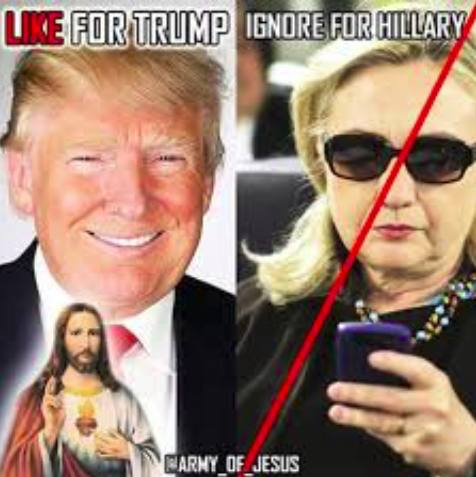 The Satan v. Jesus arm-wrestling image did not do well, to say the least, only seen by 71 people, with 14 clicks. But Christian Facebook users will be ripe for the plucking in the fall. According to Christianity Today: “Christian Facebook users are particularly active and eager to comment and share content. For years, Christian pages ranked among the most engaged on Facebook, with Jesus Daily, a feed filled with inspirational stories and Christian memes, topping the list.”

Russian President Vladimir Putin has worked hard to unite the Russian state and the Orthodox Church. Three members of the Russian punk band Pussy Riot were sentenced to two years in prison in 2012 on charges of “hooliganism,” simply for performing a song critical of Putin in a church. The misogynist patriarchs vigorously pressed the prosecution. With Church blessings, Putin’s Russia has decriminalized domestic violence, putting at risk innumerable women. And Al Jazeera reports that since the fall of communism, 25,000 Orthodox churches have been built or restored in Russia with state backing.

The integrity of U.S. elections is not only under social media assault by a strongman, but by one who is quite happy if he can further the agenda of the extreme Religious Right all over the world.

Annie Laurie Gaylor is co-president of the Freedom From Religion Foundation. She co-founded FFRF in 1976 as a college student with her mother Anne Nicol Gaylor. She served as the editor of FFRF’s newspaper, Freethought Today, from 1985-2009. She became FFRF co-president with Dan Barker in 2004. Annie Laurie has authored three books for FFRF: Woe to Women: The Bible Tells Me So; Woe to Women: The Bible Tells Me So; and Women Without Superstition: “No Gods – No Masters”, the first anthology of women freethinkers.
All Articles by this author
PrevPreviousNo More # thoughts and prayers
NextLesson of Florida’s hypocritical vote: Put ‘God’ back in that closet, fast!Next