Christian privilege and the “desecration” of a Jesus statue

Christian privilege is an insidious cancer prevalent in this country. This time the victim is a 14-year-old prankster with an irreverent sense of humor. The unidentified teen posted pictures of himself and a Jesus statue in which it appears the Lord is fellating the teen. 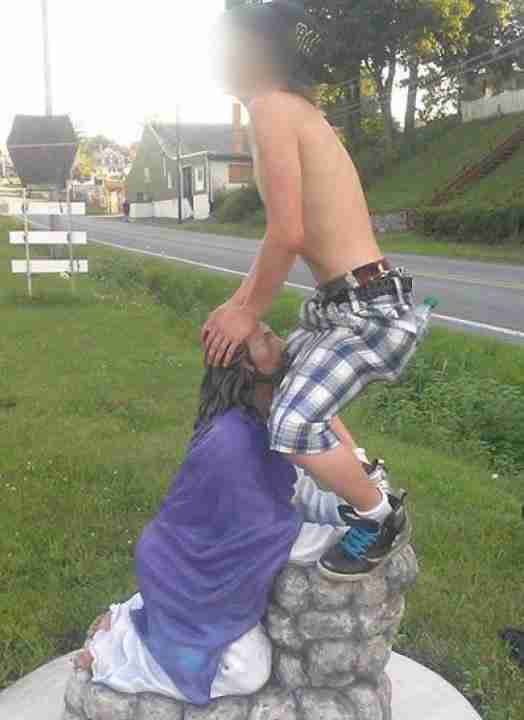 Sure, the photo is tasteless. But poor taste is not a crime (and Christians should be thankful for that). Neither is desecration of a venerated object. Yet the boy has been charged in juvenile court with that crime.

First, there was no damage done, the kid took some photos. Second, desecration is not a crime. FFRF’s litigation attorney, Bob Tiernan, won a nearly identical criminal case in Colorado in 2000.  Rodney Scott was charged with “desecrat[ing] an object venerated by the public” for removing illegal and unlicensed roadside memorial crosses. The court found that the roadside crosses were “litter” so they could not be venerated.

But so what if they were? “Desecration” and “venerated” are clearly terms meant to protect religious sensibilities—and religious objects—from harm. But we already have laws in place that do just that—laws that prohibit vandalism, property destruction, and theft. Why do we need a separate law for religious property?

Obviously, we don’t. But these laws, which exist in other states, are a codification of Christian privilege. Other examples abound. Christian privilege is also codified in the Religious Freedom Restoration Act, which Hobby Lobby recently used to impose its anti-scientific, anti-woman religion on employees.

Christians think our nation trusts in their god. We do not.

Christians think our nation is united under their god. We are not.

Christians think America is great because their god ordained it so. Those who behead journalists and fly airplanes into skyscrapers believe something similar. They’re both wrong. Freedom makes a country great. Equality makes a country even greater. And privileging one class of people because they all believe the same 2,000-year-old myth is not freedom or equality.

And, perhaps most of all, Christians think that their god cannot to be mocked (something else they have in common with cartoon-hating Muslims). Both are wrong. According to their own book, god is a genocidal tyrant and a blackmailing scapegoat. Even if such a god did exist, he would not be worthy of worship—he would be worthy only of mockery.

The Freedom From Religion Foundation, other like-minded groups, and the burgeoning ranks of godless Americans are working tirelessly to end this unjustified Christian privilege. Soon, Christians will no longer be able to call the police when somebody makes fun of their imaginary friend.

Andrew L. Seidel is a constitutional attorney and the Director of Strategic Response at the Freedom From Religion Foundation. His first book The Founding Myth: Why Christian Nationalism Is Un-American was burned by a Tennessee preacher. His second book, American Crusade: How the Supreme Court is Weaponizing Religious Freedom, is due out in 2022. He's won numerous academic awards and holds two law degrees: a J.D. magna cum laude from Tulane University Law School and an L.L.M. from Denver University’s Sturm College of Law. Andrew has a B.S. in neuroscience and environmental studies from Tulane. Before dedicating his life and law degree to keeping state and church separate, Andrew was a Grand Canyon tour guide and an accomplished nature photographer. Andrew has appeared on Fox News to debate Bill O’Reilly, MSNBC, and hundreds of other media outlets speaking on behalf of FFRF.
All Articles by this author
PrevPreviousAn open letter to Troy Schmidt, former public school chaplain in Orange County, Fla.
NextFFRF Co-President Annie Laurie Gaylor responds to columnNext