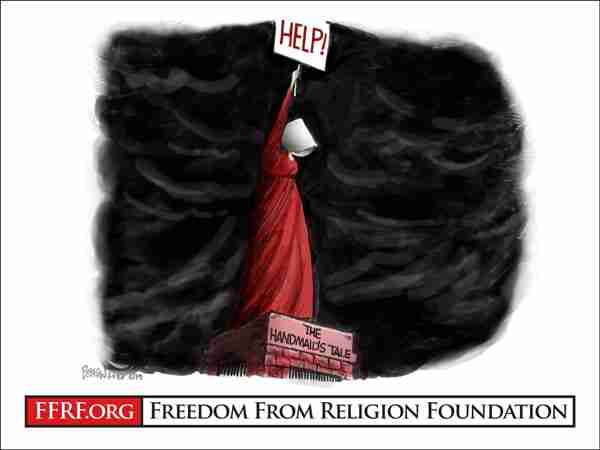 The 2020 election may be over with a new president in office, but Christian nationalism lingers. For proof, look no further than legislation that seeks to deny basic reproductive rights to millions of people in the United States and across the world — all in the name of religion.

Donald Trump was considered to be the “most pro-life president” by the Religious Right. In addition to being the first sitting president to speak at the annual March for Life event, he signed horrific executive orders that grossly favored religion. For example, Trump reversed transgender health protections, reinstated and expanded the Global Gag Rule, allowed employers to deny their employees birth control coverage, and rolled back protections from LGBTQ folks seeking federal health and welfare services. These actions were taken under the guise of “religious freedom,” which to the Religious Right means that their worldview is favored and codified.

The Biden administration admirably has already begun to dismantle these discriminatory actions. There is hope that reproductive rights will become permanent under federal law. Nevertheless, Christian nationalist legislators hold out hope that the U.S. Supreme Court will uphold their goal of upending abortion rights in the United States.

Indeed, one of the most consequential actions taken by the Trump administration was getting  three extremist justices confirmed to the Supreme Court. As these are lifetime appointments, the Biden administration cannot renege them. The latest appointment, just weeks before the 2020 elections, was of Amy Coney Barrett, a religious ideologue hostile to reproductive rights. With ultraconservative justices at the helm, the Religious Right has been emboldened to introduce draconian state-level anti-abortion legislation that it hopes will be upheld by the high court. Much of this legislation takes direct aim at Roe v. Wade, with the expectation that the court will ultimately reverse Roe or significantly reduce its already shaky scope.

Here is just a sampling of some of the recent anti-abortion state legislation that has been introduced:

• The South Carolina House is voting on a bill that would outlaw most abortions after six-eight weeks of pregnancy. Idaho’s Senate State Affairs Committee just brought forth a similar bill. Showcasing the scheme to jumpstart a Roe reversal, Blaine Conzatti of the anti-abortion group Family Policy Alliance of Idaho explained that they “want to have this law on the books ready to go into effect.”
• When South Dakota Gov. Kristi Noem introduced an anti-abortion bill in January, she misappropriated the Declaration of Independence, stating that “God created each of us and endowed all of us with the right to life.” Nearly 70 clinicians have signed a letter in opposition.
• Arkansas’ Senate panel has advanced anti-abortion legislation to ban all abortions, except to save the life of the pregnant person in a medical emergency. The bill makes no exceptions for rape or incest. This bill was introduced by Sen. Jason Rapert, who erected at his state Capitol a Ten Commandments monument (against which FFRF promptly filed suit).

Freedom From Religion Foundation is the nation’s largest association of freethinkers working to keep religion out of government. Staff Attorney Ryan Jayne recently wrote a blog post about how you can help stop hundreds of new, bad bills to insert religious doctrine into our civil laws. Meanwhile, as Christian nationalists are strategizing on a state level to repeal reproductive rights, we can support federal bills that could render these religiously influenced measures ineffective. These bills include:

• The Global Health, Empowerment, and Rights Act (Global HER Act): As law, it would permanently repeal the Global Gag Rule and prevent future presidents from reinstating it.
• Women’s Health Protection Act (WHPA): A measure “to protect a woman’s ability to determine whether and when to bear a child or end a pregnancy, and to protect a health care provider’s ability to provide reproductive health care services, including abortion services.” This bill would nullify many state TRAP laws.
• Equal Access to Abortion Coverage in Health Insurance (EACH Woman) Act of 2019: A bill that would end the draconian Hyde Amendment, cruelly denying women on medical assistance funding for abortion care, thus restricting the right to abortion to higher-income Americans.
• Abortion is Health Care Everywhere Act: A bill that would remove the Helms Amendment,  prohibiting the use of U.S. foreign assistance funds for “the performance of abortion as a method of family planning,” from the Foreign Assistance Act.

Unfortunately, Christian nationalism isn’t something that will disappear  in one election cycle. It’s become embedded in our culture and politics, no matter who is in office. This ideology is strengthened by politicians and legislators who have a flagrant disregard for our nation’s secular roots. The greatest role of secularists today is to  speak out about Christian nationalism’s encroachment on democratic values, including the “canary in the mine”: reproductive rights.

BARBARA ALVAREZ is a contributing writer for the Freedom From Religion Foundation. Previously she had held the role as FFRF's inaugural Anne Nicol Gaylor Reproductive Rights Intern, a program set up to memorialize FFRF’s principal founder, who was an early abortion rights activist and author of the book Abortion is a Blessing. Barbara was a major winner in FFRF’s essay competition for graduate students, writing about the bible’s role in the abortion battle.
All Articles by this author
PrevPreviousScience always defeats religion
NextSpringsteen, Darwin, Elena Kagan, Sylvia Pankhurst — and youNext