Skip to content
PrevPreviousYou are not your own: a reflection on the bible and abortion legislation
NextSecular displays, Supreme troubles, white Christian nationalism & a felled X-mas treeNext

‘Christ Tree’ first ‘victim’ in the ‘war on Christmas’

A 140-foot-tall “Christ Tree,” hit by friendly fire, has become the first victim this year in the so-called War on Christmas.

The city of Enid, Okla., recently spent upward of $150,000 to help one of its citizens install the “Christ Tree,” a Christmas tree meant to highlight “the true meaning of Christmas: our Lord and Savior Jesus Christ.” Ironically, that tree has now been damaged by an “act of God.”

In November, organizers boasted about the tree’s installation, “We are still amazed at what God has done and will continue to do through this tree… This would have been truly impossible on our own. But not with God!” 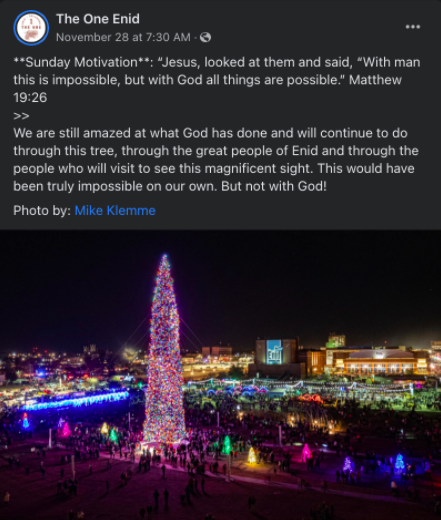 This week, however, God apparently changed his mind and lopped off the top 27 feet of the tree, perhaps a message intended to knock these proselytizers down a branch or two. 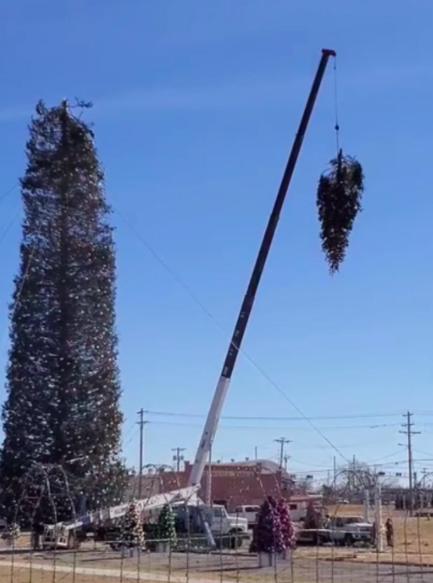 There may be a reason that there are not many 140-foot-tall trees in Oklahoma. Local crew members noted during the installation of the tree, “Wind is always an issue in Western Oklahoma … insanely, crazy winds.”But maybe this completely foreseeable turn of events wasn’t an accident? Maybe it was a message from on high regarding the hubris of these Christian proselytizers to create the world’s tallest idol, an act for heathens explicitly condemned by the bible in Jeremiah 10:2-4:

3 For the customs of the people are vain: For one cutteth a tree out of the forest, the work of the hands of the workman, with the axe.

4 They deck it with silver and with gold; they fasten it with nails and with hammers, that it move not.

Regardless of whether this incident was the result of poor planning or the interventions of a misfiring deity, the city of Enid should not have expended taxpayer funds to support this religious “Christ Tree” or the religious events currently scheduled to take place around the now significantly shorter Christmas tree, as FFRF wrote to the city in September.

There’s possibly a lesson to be learned here. 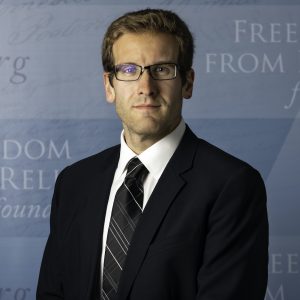 Chris Line received his B.S. in Political Science from the University of Wisconsin-Whitewater in 2012. He began working for FFRF in 2015 as a legal intern while attending law school at the University of Wisconsin. Shortly after receiving his Juris Doctor in 2017, Chris began working full-time for FFRF as a Patrick O’Reiley Legal Fellow. He became an FFRF staff attorney in September 2019. He is an accomplished photographer whose work has appeared in The Humanist magazine, The Progressive, and FFRF’s own Freethought Today. His work can even be found on display in Freethought Hall.
All Articles by this author
PrevPreviousYou are not your own: a reflection on the bible and abortion legislation
NextSecular displays, Supreme troubles, white Christian nationalism & a felled X-mas treeNext