The cover of Charlie Hebdo’s issue commemorating the one-year anniversary of the brutal attacks features God fleeing, blood on his hands, carrying an AK-47, with the headline: “One year later, the assassin is still on the run.” In other words, the magazine correctly blames religion for the murder of its staff.

Laurent Sourisseau, Charlie Hebdo’s head of publication who was injured in the attack and has been living with police protection, explained, “it’s the very idea of God that may have killed our friends a year ago. . . . Faith is not always peaceful. Maybe we should learn to live with a little less of God.”

The Vatican was not amused. “Charlie Hebdo’s move shows the sad paradox of a world which is increasingly sensitive about being politically correct to the point of being ridiculous … but does not want to recognize or respect believers’ faith in God, regardless of their religion,” complained the Vatican newspaper L’Osservatore Romano.

After claiming the right not to have their beliefs criticized or mocked (exactly why the shooters targeted Charlie Hebdo in the first place), the Vatican added:

Behind the deceptive flag of an uncompromising secularism, the French weekly once again forgets what religious leaders of every faith have been urging for ages – to reject violence in the name of religion and that using God to justify hatred is a genuine blasphemy.

This is the clash of two world views. Pope Francis and other religious leaders blamed the Charlie Hebdo victims in the aftermath of last year’s attack: “You can’t provoke, you can’t insult the faith of others, you can’t make fun of faith.” Francis’s lap dog, Bill Donohue of the Catholic League, said “Muslims are right to be angry” and also sided with the murderers. While condemning their method, he insisted we should not “tolerate the kind of intolerance that provoked this violent reaction.” (Donahue didn’t take our criticism well.) 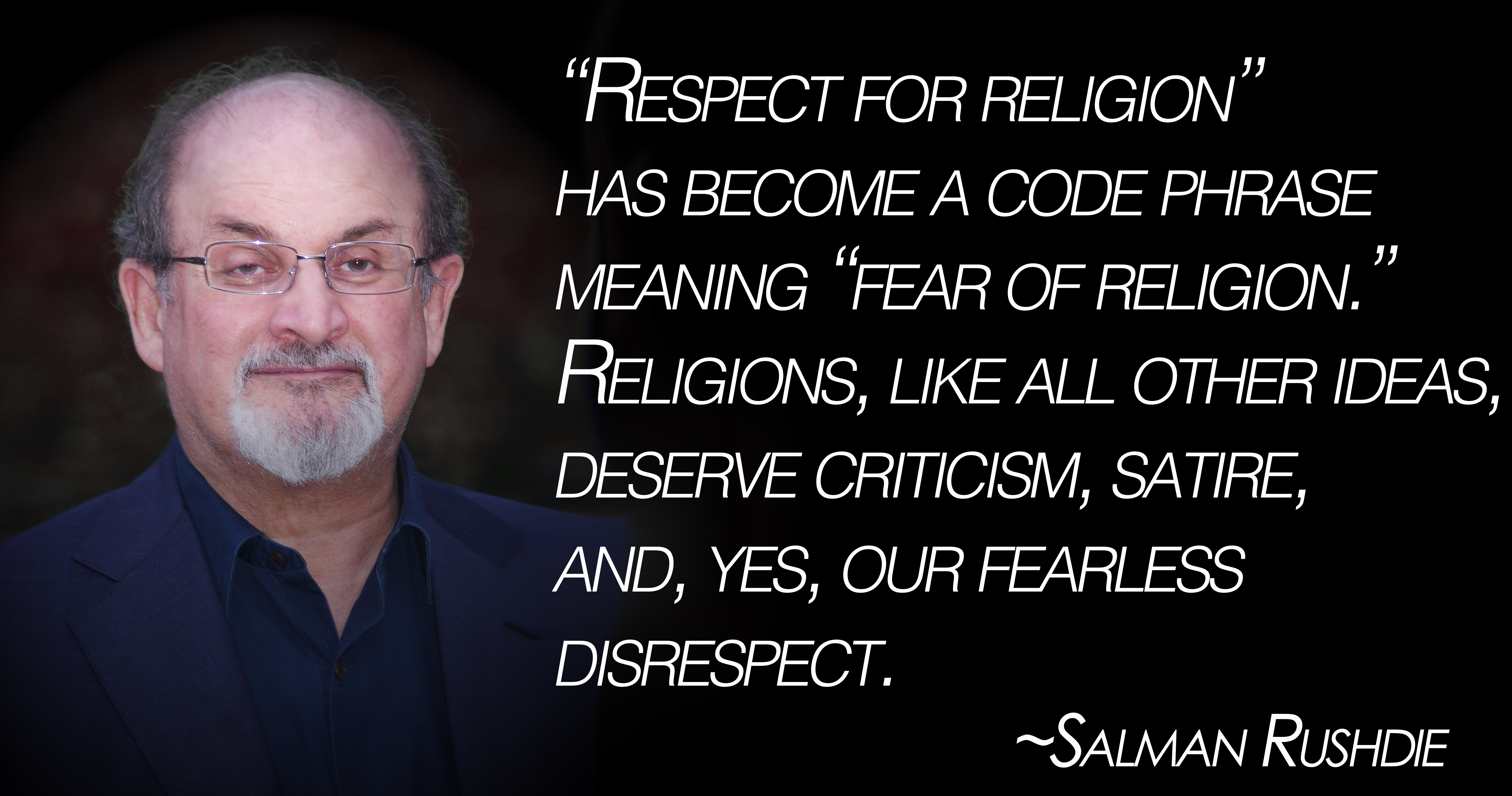 Salman Rushdie, who knows a thing or two about religion’s willingness to turn to violence to protect a supposedly omnipotent god, wrote of the Hebdo attacks, “‘Respect for religion’ has become a code phrase meaning ‘fear of religion.’ Religions, like all other ideas, deserve criticism, satire, and, yes, our fearless disrespect.”

To be sure, there are limits on free expression. You can’t yell fire in a crowded theater unless there really is a fire. But we cannot censor speech or expression because it is deemed “offensive.” One can legally wear a jacket that says “Fuck the Draft” or, to alter the facts of an actual case so as to be a bit more relevant, a jacket that says “Fuck God.” This speech is protected under our First Amendment and should be protected everywhere. There is no right not to be offended. As the Supreme Court put it:

“. . . from the standpoint of freedom of speech and the press, it is enough to point out that the state has no legitimate interest in protecting any or all religions from views distasteful to them which is sufficient to justify prior restraints upon the expression of those views. It is not the business of government in our nation to suppress real or imagined attacks upon a particular religious doctrine . . . .” Joseph Burstyn, Inc. v. Wilson, 343 U.S. 495, 505 (1952).

If people lack a right to be unoffended, certainly their imaginary friends do not possess such a right. God, Jesus, Allah and religion in general have no right to be free from ridicule and criticism. Even Thomas Jefferson agreed that “Ridicule is the only weapon which can be used against unintelligible propositions.” He was writing of the Catholic trinity.**

If your god needs the protection of secular laws—if human mockery and criticism can get under his thin skin—your god is not worthy of praise or worship. If your ideas cannot withstand criticism or mockery and must instead resort to violence or cries of blasphemy to suppress critics, those ideas are likely undeserving of respect in the first place.

Charlie Hebdo’s latest cover is brilliant. God is a terrorist, a tyrant, and, despite the Catholic paper’s unsupported protestations to the contrary, has been used as the rationale and justification for countless acts of violence and terror throughout the ages.

** For Thomas Jefferson’s thoughts on the trinity, see Letter to Francis Adrian Van der Kemp (30 July 1816) in Jefferson’s Extracts from the Gospels: The Philosophy of Jesus and The Life and Morals of Jesus, ed. Dickinson W. Adams, (Princeton University Press, 1983) pp 374-375 at 375.

Andrew L. Seidel is a constitutional attorney and the Director of Strategic Response at the Freedom From Religion Foundation. His first book The Founding Myth: Why Christian Nationalism Is Un-American was burned by a Tennessee preacher. His second book, American Crusade: How the Supreme Court is Weaponizing Religious Freedom, is due out in 2022. He's won numerous academic awards and holds two law degrees: a J.D. magna cum laude from Tulane University Law School and an L.L.M. from Denver University’s Sturm College of Law. Andrew has a B.S. in neuroscience and environmental studies from Tulane. Before dedicating his life and law degree to keeping state and church separate, Andrew was a Grand Canyon tour guide and an accomplished nature photographer. Andrew has appeared on Fox News to debate Bill O’Reilly, MSNBC, and hundreds of other media outlets speaking on behalf of FFRF.
All Articles by this author
PrevPreviousTheocracy alert! Justice Scalia says U.S. honors ‘God,’ not religious neutrality
NextAtheist group responds to school that apologized for omitting “under God” from pledgeNext