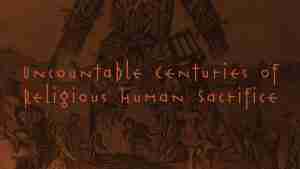 In the history of religion, uncountable centuries of human sacrifice present a gory stunner.

Parents around the world sent their children and unwed daughters to be stabbed, burned, skinned, strangled, beheaded, crushed, clubbed or otherwise killed to please absurd gods and goddesses now known to be imaginary. Men — especially prisoners of war — were also sacrificed.

Live Science recently published a list of 25 cultures that employed human sacrifice “from prehistory to the 21st century.” It included China, the city of Ur (in today’s Iraq), Mound 72 near St. Louis, the Incas of Peru, the Mayas of Mexico, the Philistines of the Mideast, Aztecs of Mexico, ancient Egypt, Stonehenge, medieval Japan, Hawaii, early Romans, ancient Greeks, the Moche tribe of Peru, the Dahomey of Africa, Celts of Europe, Nazca of Peru, Vikings, Carthage, Mongols, hunter-gatherers of early Europe, the Indus Valley, ancient Korea, India, Tanzania.

Encyclopedia Britannica says: “Sacrifice is not a phenomenon that can be reduced to rational terms; it is fundamentally a religious act that has been of profound significance to individuals and social groups throughout history, a symbolic act that establishes a relationship between man and the sacred order. For many peoples of the world, throughout time, sacrifice has been the very heart of their religious life.”

Here’s something I wrote about the subject in my book, Holy Horrors (Rowman & Littlefield and Prometheus Books):

In ancient Phoenicia, boys were burned to satisfy Adonis and other gods — and the fall of Carthage was blamed on the faithlessness of nobles who substituted children of slaves for their own on the altars. In ancient Gaul, the Druids allegedly put victims into large wicker figures of men and set them afire. In Tibet, Bon shamans performed ritual killing. In Africa, the Ashanti offered about 100 victims each September to assure a good yam harvest. In Borneo, builders of pile-houses drove the first pile through the body of a maiden to satisfy the earth goddess.

The golden age of sacrifice came with the highly organized theocracies of Central America. After the Mayans amalgamated with fierce neighbor tribes in the 11th century, ritual killings proliferated to appease the plumed serpent Kukulcan (later called Quetzacoatl by the Aztecs) and sundry other gods. In Peru, pre-Inca tribes killed children in “houses of the moon.” Beginning in the 1200s, the Incas built a complex theocracy dominated by priests who read daily magical signs and offered sacrifices to many gods. The ultimate murder religion was that of the Aztecs, which demanded about 20,000 victims per year. Multitudes of victims, mostly prisoners of war, were held on stone altars by clergy who ripped out their hearts with obsidian knives.

In Asia, five different types of human sacrifice were halted by British rulers in the 1800s. One was the yearly meriah by the Khonds of Bengal, who cut a victim into small pieces and buried the fragments in many fields to assure a good harvest. Another was a weekly rite by certain followers of the bloodthirsty Hindu goddess Kali who sacrificed a male child every Friday evening at a shrine. A third was the code of suttee among certain Hindu communities, which required a widow to leap onto her dead husband’s funeral pyre, willingly or unwillingly.

In Burma, the Buddhist king moved the capital to Mandalay in 1854 and sanctified the new city walls by burying scores of “spotless” men alive in vats under the gates and bastions. In 1861, two of the vats were discovered to be empty — whereupon royal astrologers declared that 500 men, women, boys and girls must be killed and buried at once or the capital must be abandoned. About 100 actually were buried before British authorities stopped the ceremonies.

The worst holy slaughter halted by the British was the infamous Thuggee strangling in India. For generations, certain secretive followers of Kali, the goddess of destruction, ritually dispatched an estimated 20,000 victims a year. Victims were seized, strangled, ceremonially gashed, and buried, then the Thugs ate a ritual meal over the burial spot. (They also plundered the victim’s possessions — another motive for their religious fervor.) British officers finally broke Thuggee by ferreting out cultists and hanging or imprisoning or branding them.

Among all these ritual killers over time, I wonder if any realized that their gods were purely imaginary. Whether they did or not, their careers consisted of senseless, pointless, horrifying murder.

James A. Haught, syndicated by PeaceVoice, was the longtime editor at the Charleston Gazette and has been the editor emeritus since 2015. He has won two dozen national newswriting awards and is author of 12 books and 150 magazine essays. He also is a senior editor of Free Inquiry magazine and was writer-in-residence for the United Coalition of Reason.
All Articles by this author
PrevPreviousReport finds that majority of country has no abortion access
NextWeekly Wrap: Media coverage, holiday displays, Pentecostals, Winter Solstice, and human sacrificeNext