Can it be stated enough? Why the Noah’s Ark myth doesn’t hold water

Noah’s Ark is one of those biblical stories so patently absurd that it seems questionable to dignify it with a response.

Yet many past thinkers have weighed in on the bible story and clearly we freethinkers must continue in their footsteps, because look what this tale, unexamined and unquestioned, hath wrought in our nation. . . . 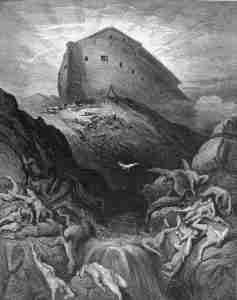 Literalist credulity has now brought us the Ark Encounter, the new Kentucky theme park with a “replica” of Noah’s Ark featuring depictions not only of the famed “two of every kind” of animals but, preposterously, even of dinosaurs. The addition of dinosaurs is a Ken Ham signature, in keeping with the young-earth creationist’s nearby Creationist Museum, which also mixes humans (circa 250,000 years ago) and dinosaurs (last roaming the earth about 65 million years ago).

Adding injury to intellectual insult is the fact that the Ark Encounter, tied to Answers in Genesis ministry, expects to receive $18 million in refunded sales tax for tickets, food and souvenirs in the next decade. (FFRF and others had protested the state of Kentucky’s initial offer of tax incentives for this purpose. When Kentucky properly withdrew the offer, it was sued by Ham, who, most unfortunately, won in court.) And those tickets are expensive ($40 per adult), perhaps helping to explain why the Grand Opening was satisfyingly underwhelming.
This Kentucky absurdity inspired me not only to read up on what illustrious writers have had to say about Noah’s Ark, but also to open my old onion-skinned King James Version of the bible. The genocidal story of Noah’s Ark takes only three short chapters in Genesis to relate.

The beginning is chilling: 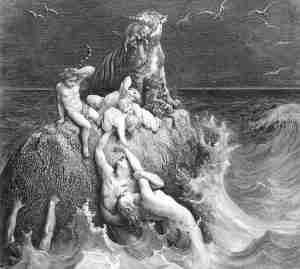 “And God saw that the wickedness of man was great in the Earth, and that every imagination of the thoughts of his heart was only evil continually.

“And it repented the Lord that he had made man on the Earth, and it grieved him at his heart.

“And the Lord said, I will destroy man whom I have created from the face of the Earth; both man, and beast, and the creeping thing, and the fowls of the air; for it repenteth me that I have made them.” Genesis 6:5-7

“Why,” pondered the famed 19th century agnostic Robert Green Ingersoll in Some Mistakes of Moses, “should he make experiments that he knows must fail? Why did he make animals that he knew he would destroy?”

For reasons we must take on faith, the bible tells us that Noah, however, “found grace in the eyes of the Lord.” Noah, at age 600 (!), unquestioningly receives and carries out the ludicrous commands of God to fashion an ark, with no ventilation or sewage system and only one 22-inch square window, in which to hold samples of every species of bird, beast and “creeping thing.”

Elizabeth Cady Stanton, in The Woman’s Bible, trenchantly comments about that window: “The paucity of light and air in this ancient vessel shows that women had no part in its architecture.”

In Letters from the Earth, Mark Twain notes that Noah built that ark the best he could, “but left out most of the essentials,” including pumps, sails, compass and most notably the cargo room. Noah is commanded to load into this improbable ark, built without nails (which did not exist at the time, a historic fact that Ken Ham did not try to replicate) two of every living species, plus food enough to keep them alive for what turns out to be a year. (Genesis 6:19) Isaac Asimov points out in his book, In the Beginning: Science Faces God in The Book of Genesis, the innate sexism of the Old Testament references to “male and his female, reducing the female to the status of property. (Would not the phrase ‘the female and her male’ seem unthinkable?,” Asimov asks.)

Curiously, but a few sentences later in Genesis 7:2, the command changes to seven of each “clean beast, two of each “unclean” animal and seven of each bird.

In calculating the numbers of birds and animals, since fundamentalists like to cherry pick their own bible and ignore the contradictions, let’s be conservative and stick with two of each “beast,” “creeping thing” and “fowls.” Let’s also be conservative and go with today’s figures, even though we’ve seen great die-offs of species in the 6,000 years since the Old Testament claimed the earth was created.

The bible is (naturally) silent on how Noah and his seven relations (including his no-name wife, three named sons and their no-name wives) manage to corral beasts, birds and creeping things from seven continents, since its provincial and ignorant authors didn’t know there were seven continents, or even what a “continent” is. The bible is also notably silent about those dinosaurs Ham keeps trying to inject into Genesis.

Twain’s retelling of this saga in Letters from the Earth is priceless, by the way. He notes that while Noah and his family may have been saved, they were not comfortable, for they were full of microbes: “It was a disagreeable condition, but it could not be helped, because enough microbes had to be saved to supply the future races of men with desolating diseases, and there were but eight persons on board to serve as hotels for them.”

Twain noted that flies, “the special pets of the Creator, his darlings,” must have tormented the last remaining family all day long, yet “they must not be killed, they must not be injured, they were sacred, their origin was divine.”

And then there are all those pesky survival details once this tiny family disembarks onto the wasteland that would be left after the water pressure killed every bit of plant and eroded all the topsoil.

Frankly, the insuperable problems with this tall tale grow too tedious and innumerable to list. As Ingersoll put it:

“Volumes might be written upon the infinite absurdity of this most incredible, wicked and foolish of all the fables contained in that repository of the impossible, called the bible. To me it is a matter of amazement, that it ever was for a moment believed by any intelligent human being.”

The most compelling retelling of the tale is by poet Philip Appleman, in his poem, “Noah.” You can find the poem in his New and Selected Poems 1956-1996. Better yet, listen to Phil and his playwright wife Margie read the poem (with background music provided by FFRF’s Dan Barker and musician member Abigail Cantor). You’ll enjoy the line about Noah “driving everyone buggy, repeating every morning, as if he’d just thought of it, ‘Well, we’re all in the same boat.’” Click here to listen.

H.L. Mencken might have been writing about Ark Encounter when he memorably and so truly stated, “No one ever went broke underestimating the intelligence of the American public.”

The state/church entanglement with its heavy public price tag makes it impossible to laugh off the Ark Encounter. See FFRF’s latest complaint about it. But so does the fact that the story of Noah’s Ark and its animals is aimed at luring children to the bible. Noah’s Ark is in fact not just the most improbable religious tale, but the worst and most premeditated ethnic cleansing found in religious literature. 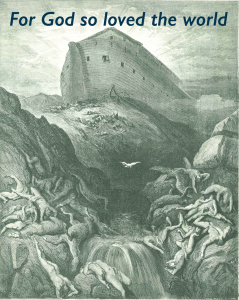 Annie Laurie Gaylor is co-president of the Freedom From Religion Foundation. She co-founded FFRF in 1976 as a college student with her mother Anne Nicol Gaylor. She served as the editor of FFRF’s newspaper, Freethought Today, from 1985-2009. She became FFRF co-president with Dan Barker in 2004. Annie Laurie has authored three books for FFRF: Woe to Women: The Bible Tells Me So; Woe to Women: The Bible Tells Me So; and Women Without Superstition: “No Gods – No Masters”, the first anthology of women freethinkers.
All Articles by this author
PrevPreviousHobby Lobby’s “In God We Trust” ad is still untrustworthy
NextBen Carson’s Lucifer-filled, logic-free RNC speechNext