Skip to content
PrevPreviousFAQs about a post-Roe U.S.
NextThe Jan. 6 committee, some good abortion news, some bad smears — and a jokeNext 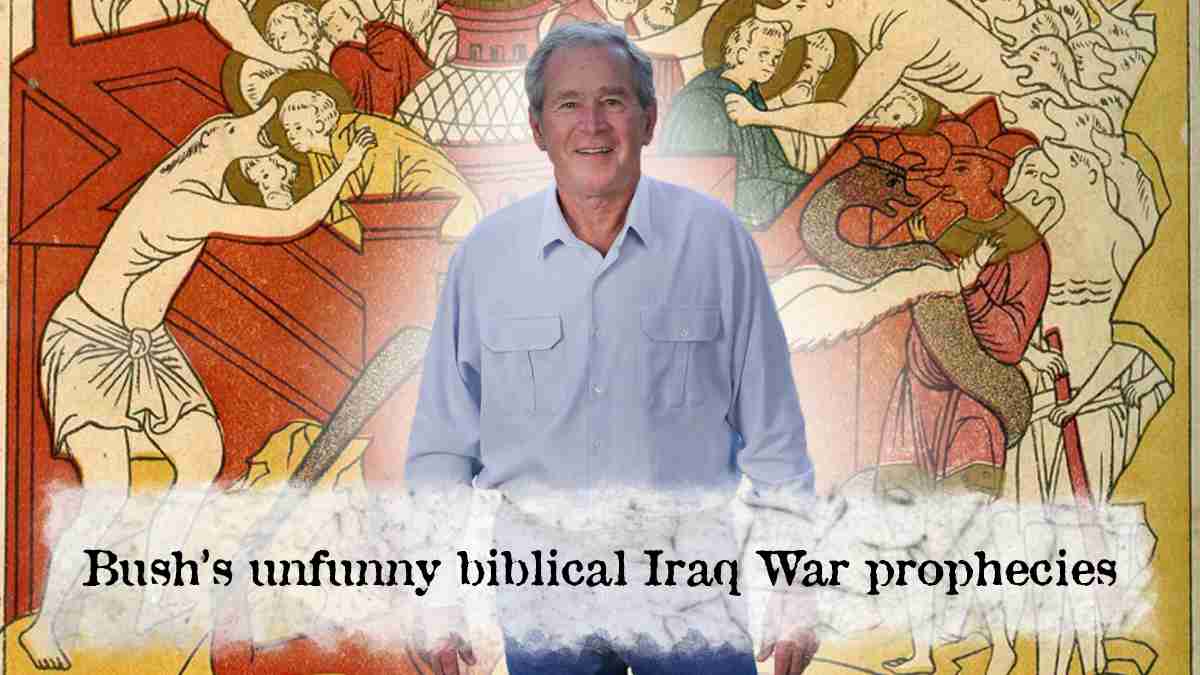 George W. Bush recently made an awful “witty” remark that’s gone viral: “The decision of one man to launch a wholly unjustified and brutal invasion of Iraq. I mean — of Ukraine. Iraq, too.”

This isn’t funny. And neither was the reason he gave in early 2003 to then-French President Jacques Chirac for justifying the attack: that it was needed to thwart Gog and Magog, the bible’s satanic agents of the Apocalypse.

Honest. The president of the United States, in a top-secret phone call to a major European ally, asked for French troops to join American soldiers in invading Iraq as a mission from God. After leaving office, Chirac recounted that the American leader appealed to their “common faith” (Christianity) and told him: “Gog and Magog are at work in the Middle East. … The biblical prophecies are being fulfilled. … This confrontation is willed by God, who wants to use this conflict to erase his people’s enemies before a New Age begins.”

This bizarre — seemingly deranged — episode happened while the White House was assembling its “coalition of the willing” to unleash the Iraq invasion. Chirac says he was boggled by Bush’s call and “wondered how someone could be so superficial and fanatical in their beliefs.”

After the 2003 call, the puzzled French president’s staff asked Thomas Romer, a theologian at the University of Lausanne, to analyze the weird appeal. Romer explained that the Old Testament book of Ezekiel contains two chapters (38 and 39) in which God rages against Gog and Magog, sinister and mysterious forces menacing Israel. Jehovah vows to smite them savagely, to “turn thee back, and put hooks into thy jaws” and slaughter them ruthlessly. In the New Testament, the mystical book of Revelation envisions Gog and Magog gathering nations for battle, “and fire came down from God out of heaven, and devoured them.”

In 2007, Romer recounted Bush’s strange behavior in a University of Lausanne publication. A French-language Swiss newspaper, Le Matin Dimanche, printed a sarcastic account titled: “When President George W. Bush saw the prophecies of the Bible coming to pass.” France’s La Liberte likewise spoofed it under the headline, “A small scoop on Bush, Chirac, God, Gog and Magog.” But other major news media missed the amazing report. Subsequently, ex-President Chirac confirmed the nutty event in a long interview with French journalist Jean-Claude Maurice, who told the tale in his book, Si Vous le Répétez, Je Démentirai (If You Repeat It, I Will Deny).

Oddly, mainstream media in the United States ignored this alarming revelation. My own paper, The Charleston Gazette in West Virginia, was one of the very few that took notice. Canada’s Toronto Star recounted the story, calling it a “stranger-than-fiction disclosure … which suggests that apocalyptic fervor may have held sway within the walls of the White House.” Fortunately, online commentary sites spread the news, filling the press void.

The French revelation jibes with other known aspects of Bush’s renowned evangelical certitude. For example, a few months after his phone call to Chirac, Bush attended a 2003 summit in Egypt. The Palestinian foreign minister later said the American president told him he was “on a mission from God” to defeat Iraq. At that time, the White House called this claim “absurd.” Later, GQ magazine revealed that then-Defense Secretary Donald Rumsfeld attached war-like bible verses to war reports he hand-delivered to Bush. One declared: “Put on the full armor of God, so that when the day of evil comes, you may be able to stand your ground.”

It’s awkward to say openly, but Bush is a religious crackpot, an ex-drunk of small intellect who “got saved.” He never should have been entrusted with the power to start wars.

Americans really didn’t know why he launched the unnecessary Iraq attack. The official pretexts turned out to be baseless. Iraq had no weapons of mass destruction, after all, and wasn’t in league with al-Qaida, as the White House alleged. The collapse of his asserted reasons led to speculation about hidden motives: Was the invasion unleashed to gain control of Iraq’s oil, or to protect Israel, or to complete Bush Senior’s old vendetta against Saddam Hussein? Nobody ever found a completely convincing answer.

Added to the other suspicions was the possibility that arcane bible prophecies were a factor. This casts an ominous pall over a needless war that possibly killed hundreds of thousands and cost trillions.

This column has been adapted and updated from a piece originally written for The Charleston Gazette-Mail on July 23, 2009, and syndicated nationally by Knight-Ridder-Tribune.

James A. Haught, syndicated by PeaceVoice, was the longtime editor at the Charleston Gazette and has been the editor emeritus since 2015. He has won two dozen national newswriting awards and is author of 12 books and 150 magazine essays. He also is a senior editor of Free Inquiry magazine and was writer-in-residence for the United Coalition of Reason.
All Articles by this author
PrevPreviousFAQs about a post-Roe U.S.
NextThe Jan. 6 committee, some good abortion news, some bad smears — and a jokeNext