Bill Donohue, the Catholic League’s resident bloviator, is once again tilting at straw men. Never one to stake his reputation on facts or data, Donohue’s latest piece focuses solely on the Freedom From Religion Foundation and is as windy as it is witless.

His first paragraph is completely wrong. The whole thing:

Organized atheists, unlike most Americans who are non-believers, are more often than not driven by hatred of religion and the faithful. Their impulses are totalitarian: they would ban all religious expression if they could. A classic case is Freedom From Religion Foundation (FFRF).

It’s not easy to be that wrong. That Donohue is so uniformly fallacious hints at underlying malice, rather than an innocent misconception. No “organized atheists” or secular group in this country has ever called for banning all religious expression, even if we had the power. But churches have no right to demand, and the government has no power to give them, a megaphone or a platform or a forum that belongs to We the People. To do so violates the Constitution. Express your religion all you want, but do it without government aid and support.

First, Donohue betrays his lack of legal training and scholarship by suggesting that Pence was just exercising his own personal rights to free speech and religion. Pence was acting in his official capacity as Vice President when he called on Americans to tithe. He made the statement in a briefing on behalf of  the White House Coronavirus Task Force from the White House, after being introduced by the President as the Vice President. C-SPAN was broadcasting the message because the Vice President of the United States was briefing the country on a pandemic. Sure, Mike Pence in his personal capacity has free speech and free exercise rights, but the Office of Vice President of the United States is bound by the Establishment Clause, by the separation of state and church. Mr. Pence can recommend whatever he wants in his private capacity. Vice President Pence cannot use the power, prestige and resources of the federal government to promote religion.

Second, Donohue claims that Pence was merely suggesting something; it wasn’t mandatory so it wasn’t unconstitutional. But Donohue misses the point: The government does not have the power to promote religion. The action need not be coercive, because the government is acting in a way that is prohibited. When it comes to separating state and church, voluntariness has never excused a constitutional violation. And if any government official recommended any religion other than Donohue’s — for instance, suggested citizens bow and pray to Mecca — Donohue would sling his spittle at the hypothetical official with all the red-faced anger he musters for us atheists.

For his third trick, Donohue pulls a bait and switch. FFRF objected to the government telling citizens to financially support religion. Donohue instead defends “the critical role that religion plays in society” as if it were the same thing. And he does it with some dubious history. For instance, he begins with this:

During the Civil War, Lincoln once told his secretary, “I have been driven many times upon my knees by the overwhelming conviction that I had nowhere else to go.”

It’s a popular claim, but it’s almost certainly wrong according to historian and Lincoln scholar Dr. James Cornelius, curator of the Lincoln Collection at the Abraham Lincoln Presidential Library & Museum in Springfield, Illinois. This quote comes from no original Lincoln source, but was a personal observation penned three months after Lincoln died. The author was writing “amidst the debate about whether Lincoln had been a true or orthodox Christian, implying that he was about to join a church formally, something he had never done” and his later recollections became even more far-fetched. The words don’t sound like Lincoln and there’s even an objective grading scale scholars have developed for putative Lincoln quotes, A through E, just like in grade school. This quote gets a D, “a quotation about whose authenticity there is more than average doubt.”

The rest of Donohue’s history is also D-worthy, too, but that’s what happens when you spend your life in the service of one book.

Finally, Donohue claims that religion is doing good in this time of crisis and perhaps some congregations are. But many are also openly defying social distancing guidelines and mandates putting millions more citizens at risk beyond their own worshippers, something FFRF explained in its letter to every governor:

These churches are not just recklessly risking the lives of worshippers, though that is certainly true. The real danger is overwhelming the health care system. Doctors are working overtime and are already rationing beds and ventilators. Churches that hold services are demonstrating a complete lack of respect for those efforts and the lives of community members, not just worshippers. They are knowingly increasing pressure on the health care system, rather than alleviating it. Holding services at this time would be immoral.

Then there are the predatory churches, the grifters, those who are fleecing their flocks, fearful of the pandemic. There are even preachers claiming god “will multiply” their rolls of “toilet paper” if only they have enough faith. But if believers need more toilet paper, they should turn to Donohue’s writing — it’s good for little else. 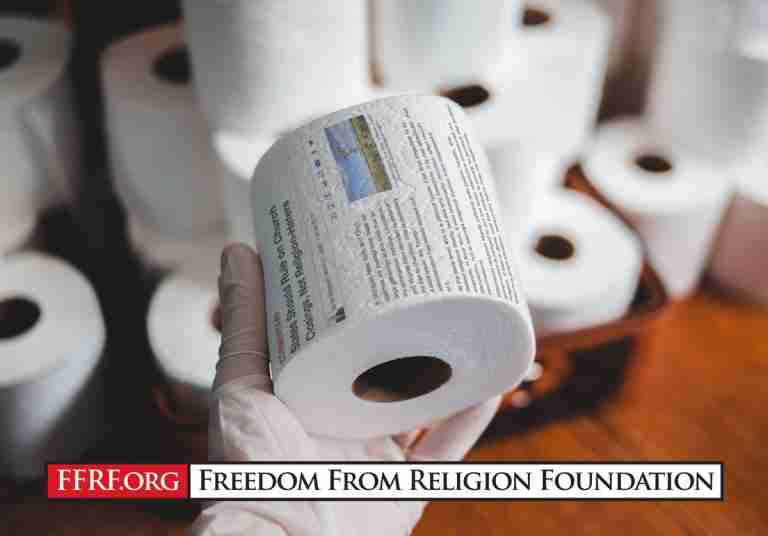 Andrew L. Seidel is a constitutional attorney and the Director of Strategic Response at the Freedom From Religion Foundation. His first book The Founding Myth: Why Christian Nationalism Is Un-American was burned by a Tennessee preacher. His second book, American Crusade: How the Supreme Court is Weaponizing Religious Freedom, is due out in 2022. He's won numerous academic awards and holds two law degrees: a J.D. magna cum laude from Tulane University Law School and an L.L.M. from Denver University’s Sturm College of Law. Andrew has a B.S. in neuroscience and environmental studies from Tulane. Before dedicating his life and law degree to keeping state and church separate, Andrew was a Grand Canyon tour guide and an accomplished nature photographer. Andrew has appeared on Fox News to debate Bill O’Reilly, MSNBC, and hundreds of other media outlets speaking on behalf of FFRF.
All Articles by this author
PrevPreviousTrump, Pence and lots of governors keep our hands full during the pandemic
NextBreaking News: We beat Gov. Abbott (and tackle White House, Catholic League & others)Next