It’s impossible to read without wincing the news stories about the devout 15-year-old Pakistani boy who cut off his own hand to prove his fealty to Islam.

According to various news accounts, on the evening of Jan. 10, the imam Shabir Ahmad of the village of Khanquah, Pakistan, denounced the boy, Anwar Ali, as a blasphemer. As the Times account points out, that’s “an accusation that in Pakistan can get a person killed — even when the accusation is false, as it was in this case.”

Ali, son of a poor laborer, had attended an evening prayer in the village mosque. When the imam asked for a show of hands of anyone who did not love the Prophet Muhammad, Ali, misunderstanding, raised his hand. When no other hands went up, he immediately realized his mistake, and put it down. By then, the Times reports, the mullah and others were already screaming at him “Blasphemer!”

The boy went home and promptly chopped of his right hand with a sharp scythe, put it on a plate, and took it back to the mosque to show the imam his contrition. The imam, apparently realizing he was in trouble, fled, was found and locked up by police, let go after local religious leaders protested, then on Sunday was rearrested.

The district police chief, Faisal Rana, as quoted by the Times, noted that “he has been charged for inciting and arousing the emotions of people to such a level that the boy did this act.” I wouldn’t hold out strong hopes the prosecution will proceed.

The boy wasn’t even hospitalized, according to reports. His stump was bandaged at a village clinic. He has declined to blame the mullah: “What I did was for the love of the Prophet Muhammad.” His father, Muhammad Ghafoor, in a telephone interview with the Times, said: “We are lucky that we have this son who loves Prophet Muhammad that much. We will be rewarded by God for this in the eternal world.” It’s possible this teenager, by his act of self-mutilation, even saved his own life.

As Sam Harris tweeted about this tragedy:

The Times recap reminds us that the bodyguard of Salman Taseer, governor of Punjab, assassinated him in 2011 just because Taseer criticized Pakistan’s blasphemy laws and defended a Christian woman falsely accused of blasphemy. “The assassin is a national hero to many devout Pakistanis: His jail cell has become a pilgrimage site, and a mosque was renamed to honor him,” noted Times reporters Wagar Gillani and Rod Nordland.

An accusation of blasphemy in Pakistan apparently is the equivalent of being labeled a witch during the Salem witch trials. There’s no way to defend against it. It’s reminiscent of the vicious execution of Farkhunda last year by a mob of enraged males in Afghanistan, after being falsely accused of burning a Koran.

During many ages there were witches. The Bible said so. The Bible commanded that they should not be allowed to live. Therefore the Church, after eight hundred years, gathered up its halters, thumb-screws, and firebrands, and set about its holy work in earnest. She worked hard at it night and day during nine centuries and imprisoned, tortured, hanged, and burned whole hordes and armies of witches, and washed the Christian world clean with their foul blood.

There’s nothing laughable right now about the situation in Pakistan, Bangladesh, Afghanistan and Syria. It’s alarming to see the lights go out in many parts of the Middle East as Islamist fanaticism and brute violence take hold.

But my first thought upon reading about this horrific chain of events was that this kind of self-mutilation also occurs within Christianity from time to time. True believers (particularly those racked by religion-inspired shame over sexual matters) have been known to heed the admonition of Jesus in Matthew 5:30:

“And if your right hand causes you to sin, cut it off and throw it away. For it is better that you lose one of your members than that your whole body go into hell.”

That verse is preceded by an admonition: “Thou shalt not commit adultery. . . whosoever looketh on a woman to lust after her hath committed adultery with her already in his heart. And if thy right eye offend thee, pluck it out.” Matthew 27-29

Although the Koran contains nothing tantamount to this, it does call for the hands of thieves to be cut off: Cut off the hands of thieves, whether they are man or woman, as punishment for what they have done—a deterrent from God: God is almighty and wise. (5:38)

Literal belief in such doctrines is truly dangerous to life and health. That’s why FFRF offers warning labels (suitable for any so-called ‘holy book’ by the way, not just the bible): 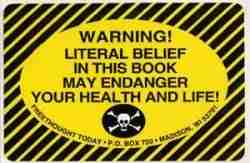 Any religion that can inspire cruel acts of barbaric self-mutilation, much less so much fear that it would prompt a poor Pakistani teenager to sever his own hand, is detestable.

Annie Laurie Gaylor is co-president of the Freedom From Religion Foundation. She co-founded FFRF in 1976 as a college student with her mother Anne Nicol Gaylor. She served as the editor of FFRF’s newspaper, Freethought Today, from 1985-2009. She became FFRF co-president with Dan Barker in 2004. Annie Laurie has authored three books for FFRF: Woe to Women: The Bible Tells Me So; Woe to Women: The Bible Tells Me So; and Women Without Superstition: “No Gods – No Masters”, the first anthology of women freethinkers.
All Articles by this author
PrevPreviousAnother case against God: It’s mosquitoes over humanity
NextAZ Columnist: Atheists are smelly, thoughtless, intolerant, and annoyingNext