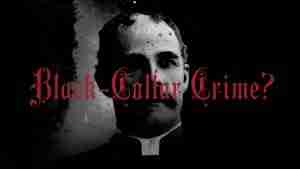 Big-money evangelists who get rich from religion are a blemish on America — and one such evangelist is currently tangled in criminal charges.

“Bishop” Lamor Whitehead, a flashy Brooklyn pastor who drives a $350,000 Rolls-Royce and wears Gucci suits and flamboyant jewelry, was indicted on federal counts of swindling his parishioners.

In 2006, Whitehead was arrested while wearing a mink coat and charged with a $2 million identity theft scam. He was sentenced to up to 30 years in Sing Sing, but was paroled for good behavior in 2013. He switched to religion and founded the Leaders of Tomorrow Church as a for-profit corporation. Enormous profits followed, and his wealth soared to an estimated $2 million. News reports showed him and his wife wearing huge jewels.

Last summer, three robbers entered a church service, held both Whiteheads at gunpoint, and took $1 million worth of jewels they were wearing. Two young men were charged with the stickup, and are to be tried this year.

Just before Christmas, the bishop was indicted on two federal counts of wire fraud, one count of extortion and one count of making material false statements for lying to the FBI. He is accused of swindling an aging parishioner out of $90,000 by promising to buy her a home, but using the funds for a down payment on a $4.4 million mansion for himself in New Jersey. Various other thefts are alleged.

Whitehead pleaded not guilty and was released on $500,000 bond. Some civil lawsuits also are pending against him. By law, he is presumed innocent unless proven otherwise. Keep watching the news to see how this mess develops.

Freethought Today is famous for printing a monthly list of “Black Collar Crimes” — literally thousands of cases against clergymen over the years. Wikipedia also contains a long list divided in two sections: violent offenses including murder and rape, and nonviolent swindles.

Why do many scumbags enter the clergy? Is it because the pulpit offers easy opportunities to self-enrich or victimize, with little surveillance? Or is it because religion itself is dishonest, based on bogus “revelations”?

James A. Haught, syndicated by PeaceVoice, was the longtime editor at the Charleston Gazette and has been the editor emeritus since 2015. He has won two dozen national newswriting awards and is author of 12 books and 150 magazine essays. He also is a senior editor of Free Inquiry magazine and was writer-in-residence for the United Coalition of Reason.
All Articles by this author
PrevPreviousCelebrating some good abortion news
NextChoose CPR not godNext